The Civil War Laid to Rest 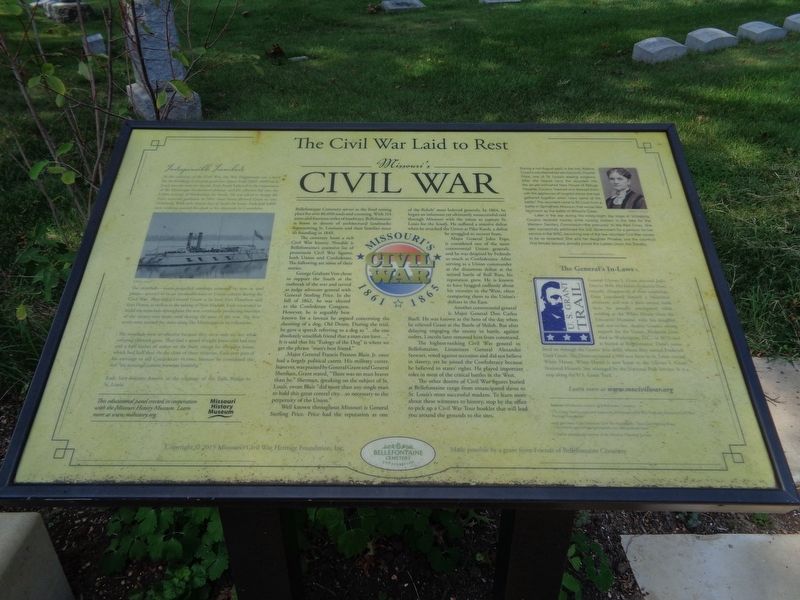 Bellefontaine Cemetery serves as the final resting place for over 86,000 souls and counting. With 314 acres and fourteen miles of roadways, Bellefontaine is home to dozens of architectural landmarks representing St. Louisans and their families since its founding in 1849.

The cemetery hosts a rich Civil War history. Notable is Bellefontaine's extensive list of prominent Civil War figures, both Union and Confederate. The following are some of their stories.

George Graham Vest chose to support the South at the outbreak of the war and served as judge advocate general with General Sterling Price. In the fall of 1862, he was elected to the Confederate Congress. However, he is arguably best known for a lawsuit he argued concerning the shooting of a dog, Old Drum. During the trial, he gave a speech referring to a dog as "…the one absolutely unselfish friend that a man can have…" It is said that his "Eulogy of the Dog" is where we get the phrase "man's best friend."

Major General Francis Preston Blair, Jr. once had a largely political career. His military career, however, was praised by General Grant and General Sherman. 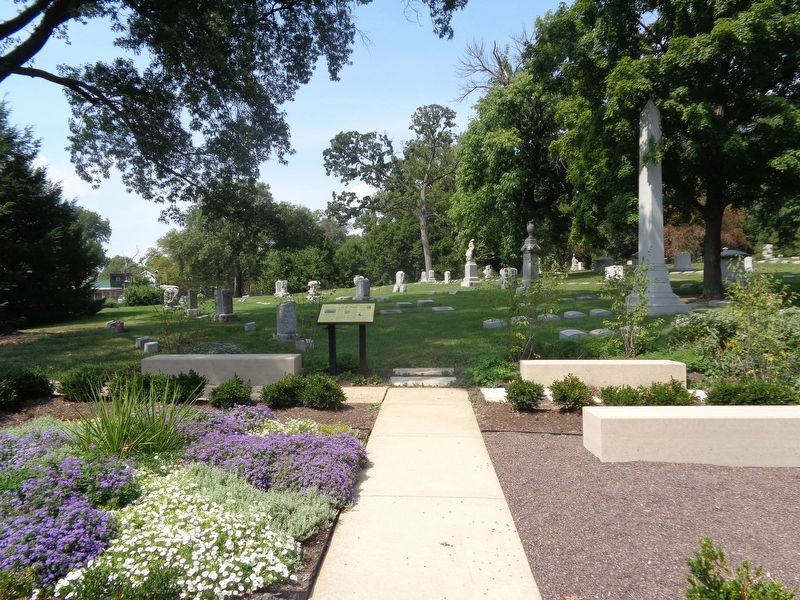 Photographed By Jason Voigt, September 7, 2020
2. The Civil War Laid to Rest Marker
Marker is located in a garden next to the Gatehouse.

Click or scan to see
this page online
Grant stated, "There was no man braver than he." Sherman, speaking on the subject of St. Louis, swore Blair "did more than any single man to hold this great central city…so necessary to the perpetuity of the Union."

Well known throughout Missouri is General Sterling Price. Price had the reputation as one of the Rebels' most beloved generals. In 1864, he began an infamous yet ultimately unsuccessful raid through Missouri with the intent to capture St. Louis for the South. He suffered a massive defeat when he attacked the Union at Pilot Knob, a defeat he struggled to recover from.

Major General John Pope is considered one of the most controversial Union generals, and he was despised by Federals as much as Confederates. After serving as a Union commander at the disastrous defeat at the second battle of Bull Run, his reputation grew. He is known to have bragged endlessly about his victories in the West, often comparing them to the Union's defeats in the East.

Another controversial general is Major General Don Carlos Buell. He was known as the hero of the day when he relieved Grant at the Battle of Shiloh. But after delaying engaging the enemy in battle, against orders, Lincoln later removed him from command.

The highest-ranking Civil War general in Bellefontaine, Lieutenant General Alexander Stewart, voted against secession and did not believe 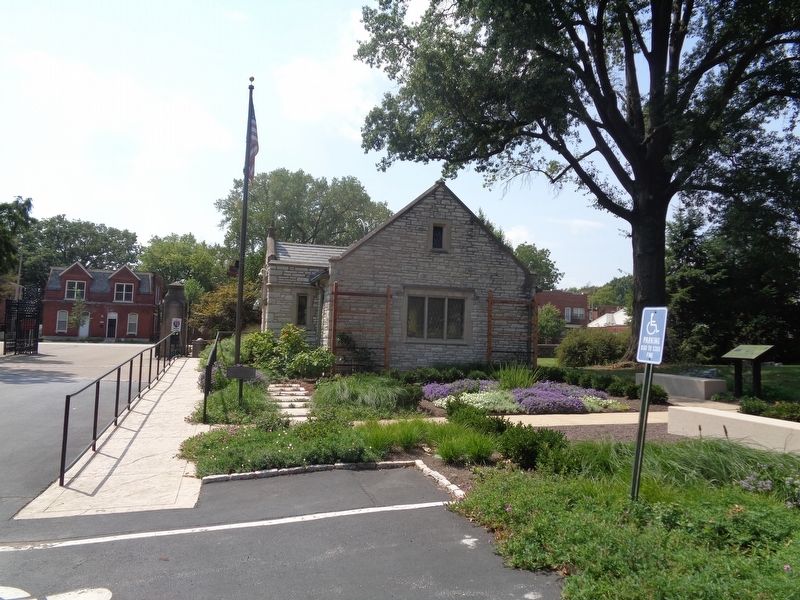 Photographed By Jason Voigt, September 7, 2020
3. The Civil War Laid to Rest Marker
Marker is next to the cemetery's gatehouse by the entrance.
in slavery, yet he joined the Confederacy because he believed in states' rights. He played important roles in most of the critical battles in the West.

The other dozens of Civil War figures buried at Bellefontaine range from emancipated slaves to St. Louis's most successful madam. To learn more about these witnesses to history, stop by the office to pick up a Civil War Tour booklet that will lead you around the grounds to the sites.

At the outbreak of the Civil War, the War Department saw a need for the building of ironclad gunboats. James Eads (1820-1887) of St. Louis was the man for the job. Eads firmly believed in the importance of the Mississippi for national defense, and his schemes fed into the Union strategy of blockading the South. He was asked to design the Navy ironclad gunboats in 1861; these boats allowed Grant to take Vicksburg. With only ninety days to build the boats, Eads had 4,000 men working around the clock at his shipyards in Carondelet.

The ironclads — steam-propelled warships armored by iron or steel plates — proved to be an invaluable asset to Union success during the Civil War. They aided General Grant as he took Fort Donelson and Fort Henry, as well as in the taking of New Madrid. Eads continued to build the ironclads throughout the war, eventually producing fourteen 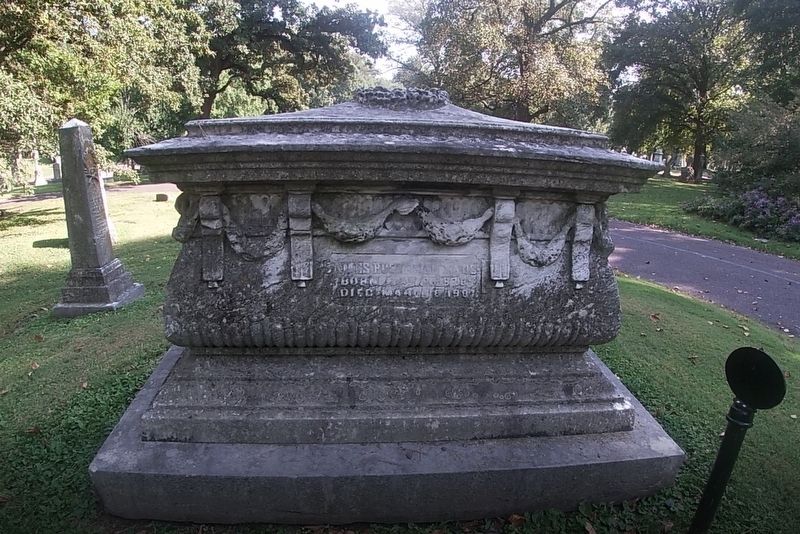 Photographed By Jason Voigt, September 7, 2020
4. James B. Eads gravesite
One of St. Louis' most notable figures (mentioned on the marker) is buried at Bellefontaine Cemetery.
of the twenty-two boats used during the span of the war. The first seven were named for cities along the Mississippi or its tributaries.

The ironclads were so effective because they drew only six feet while carrying thirteen guns. They had a speed of eight knots and had two and a half inches of armor on the boat; except for the pilot house, which had half that. At the close of these victories, Eads sent part of his earnings to aid Confederate victims, because he considered the war "an accursed contest between brothers."

Eads later became known as the engineer of the Eads Bridge in St. Louis.

During a hot August early in the war, Adaline Couzins volunteered her services to Dr. Charles Pope, one of St. Louis's leading surgeons. After she helped carry the wounded into the as-yet-unfinished New House of Refuge Hospital, Couzins "washed and dressed them with the appliances of hospital stores she had gathered together when news came of the battle." The wounded came to St. Louis from a battle in Springfield, Missouri, that would later be known as the battle of Wilson's Creek.

Later in the war during the ninety-eight day siege at Vicksburg, Couzins received injuries while nursing soldiers in the field for the Western Sanitary Commission - the precursor to the Red Cross. She later successfully petitioned the U.S. Government for a pension for her service in the WSC, becoming one of the few volunteer Civil War nurses to be so rewarded. She and her daughter Phoebe, one the country's first female lawyers, proudly joined the Ladies Union Aid Society.

General Ulysses S. Grant married Julia Dent in 1848. Her father, Frederick Dent, initially disapproved of their courtship. Dent considered himself a Maryland aristocrat and was a slave owner; both facts he proudly proclaimed while residing at the White House (then the Executive Mansion) with his daughter and son-in-law, despite Grant's strong support for the Union. Frederick Dent died in Washington, D.C., in 1873, and is buried at Bellefontaine. Dent's name lived on through the Grants' first child, whom they named Frederick Dent Grant. The Dents occupied a 900-acre farm in St. Louis named White Haven. White Haven is now home to the Ulysses S. Grant National Historic Site managed by the National Park Service. It is a stop along the U.S. Grant Trail.

Topics and series. This historical marker is listed in these topic lists: Cemeteries & Burial Sites • War, US Civil • Women . In addition, it is included in the Former U.S. Presidents: #18 Ulysses S. Grant, and the Missouri’s Civil War series lists.

Location. 38° 41.459′ N, 90° 14.116′ W. Marker is in St. Louis, Missouri. Marker can be reached from West Florissant Avenue. Marker is located near the entrance of Bellefontaine Cemetery. Touch for map. Marker is at or near this postal address: 4947 W Florissant Ave, Saint Louis MO 63115, United States of America. Touch for directions.

Regarding The Civil War Laid to Rest. Marker is accessible during the cemetery's opening hours. The gates are locked during off-hours. Please check their website and/or social media pages for their operation times.

Also, please note that the Missouri's Civil War Heritage Foundation's website (mocivilwar.org, mentioned on the marker) is inactive as of September 2020.