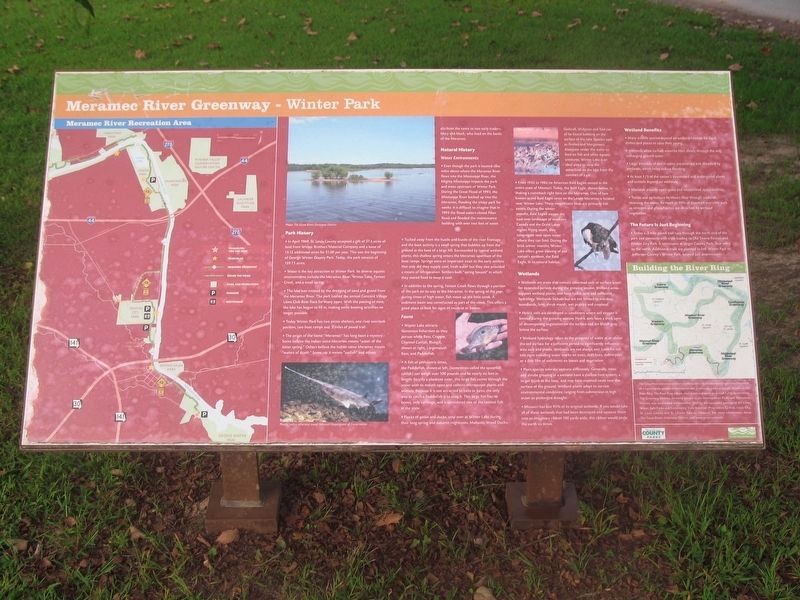 Park History
• In April 1969, St. Louis County accepted a gift of 37.4 acres of land from Winter Brothers Material Company and a lease of 13.12 additional acres for $1.00 per year. This was the beginning of George Winter County Park. Today, the park consists of 159.73 acres.
• Water is the key attraction to Winter Park. Its diverse aquatic environments include the Meramec River, Winter Lake, Fenton Creek, and a small spring.
• The lake was created by the dredging of sand and gravel from the Meramec River. The park hosted the annual Concord Village Lions Club Boat Race for many years. With the passing of time, the lake has begun to fill in, making some boating activities no longer possible.
• Today Winter Park has two picnic shelters, one river overlook pavilion, two boat ramps and .3 miles of paved trail.
• The origin of the name "Maramec" has long been a mystery. Some believe the Indian word Meramec means "water of the bitter spring." Others believe the Indian name Meramec means "waters of death." Some say it means "catfish" and others attribute the name to two early traders, Mary and Mack, who lived 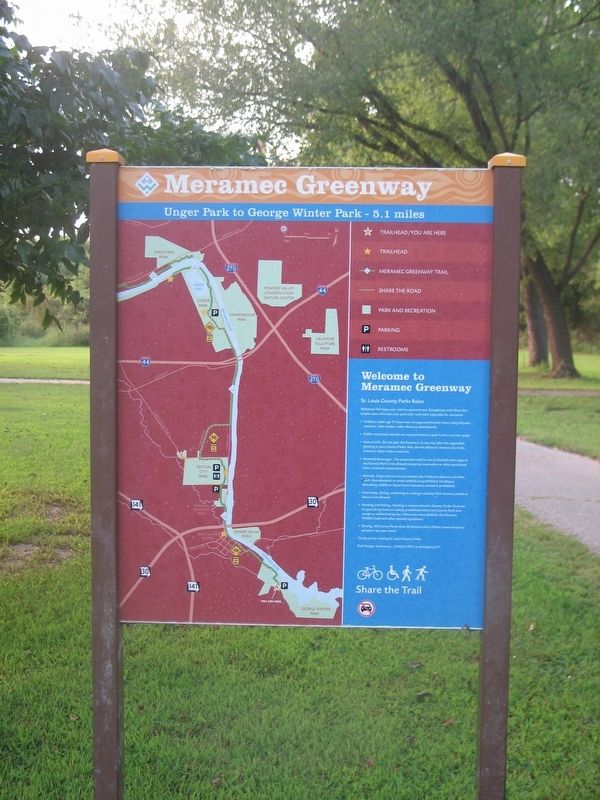 Click or scan to see
this page online
on the banks of the Meramec.

Natural History
Water Environments
• Even though the park is located nine miles above where the Meramec River flows into the Mississippi River, the Mighty Mississippi impacts the park and areas upstream of Winter Park. During the Great Flood of 1993, the Mississippi River backed up into the Meramec, flooding the entire park for weeks. It is difficult to imagine that in 1993 the flood waters closed Allen Road and flooded the maintenance building with over two feet of water.
• Tucked away from the hustle and bustle of the river frontage and the boat activity is a small spring that bubbles up from the ground at the base of a large hill. Surrounded by typical wetland plants, this shallow spring enters the Meramec upstream of the boat ramps. Springs were an important asset to the early settlers. Not only did they supply cool, fresh water, but they also provided a means of refrigeration. Settlers built "spring houses" in which they stored food to keep it cool.
• In addition to the spring, Fenton Creek flows through a portion of the park on its way to the Meramec. In the spring of the year, during times of high water, fish move up the little creek. A sediment basin was constructed as part of the creek. This offers a good place to look for signs of muskrat or beaver. 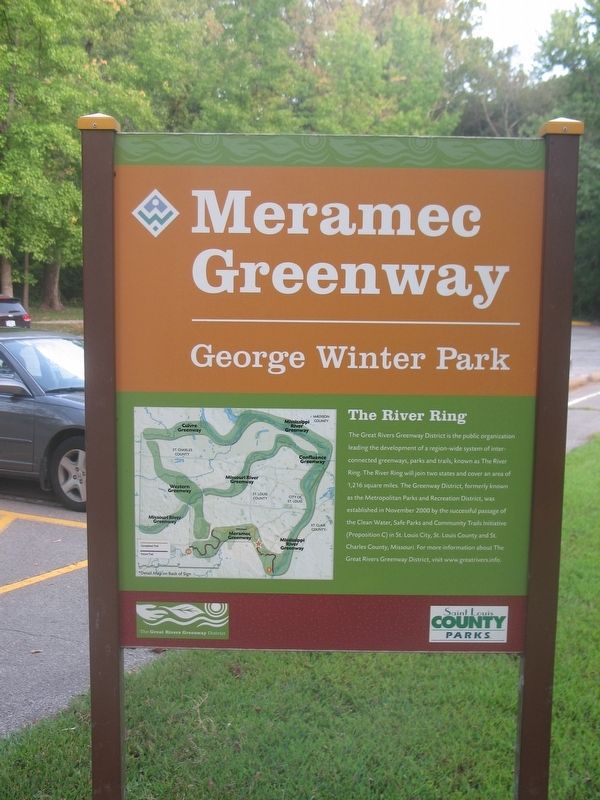 Photographed By Carl Scott Zimmerman, September 16, 2020
3. North face of secondary marker
attracts numerous fishermen as they pursue white Bass, Crappie, Channel Catfish, Bluegill, shown at right, Largemouth Bass, and Paddlefish.
• A fish of prehistoric times, the Paddlefish, shown at left, (sometimes called the spoonbill catfish) can weigh over 100 pounds and be nearly six feet in length. Strictly a plankton eater, this large fish swims through the water with its mouth open and collects microscopic plants and animals. Because it is not attracted to baits or lures, the only way to catch a Paddlefish is to snag it. This large fish has no bones, only cartilage, and is considered one of the tastiest fish in the state.
• Flocks of geese and ducks, stop over at Winter Lake during their long spring and autumn migrations. Mallards, Wood Ducks, Gadwall, Widgeon and Teal can all be found bobbing on the surface of the lake. Species such as Grebes and Mergansers disappear under the water to feed on fish and other aquatic creatures. Winter Lake is an ideal place to view the waterfowl on the lake from the comfort of a car.
• From 1932 to 1982 no American Bald Eagles nested in the entire state of Missouri. Today, the Bald Eagle, shown below, is making a comeback right here on the Meramec. One of the two known active Bald Eagle nests on the Lower Meramec. One of two known active Bald Eagle nests on the Lower Meramec is located near Winter Lake. These magnificent birds are primarily fish eaters. During the winter months, Bald Eagles escape the iced-over landscape of southern Canada and the Great Lakes region. Flying south, they congregate near open water where they can feed. During the brisk winter months, Winter Lake offers great viewing of our nation's emblem, the Bald Eagle, in its natural habitat.

Wetlands
• Wetlands are areas that contain saturated soils or surface water for extended periods during the growing season. Wetland areas support wetland plants, and have hydric soils and sufficient hydrology. Wetlands include but are not limited to marshes, woodlands, fens, shrub march, wet prairies and cropland.
• Hydric soils are developed in conditions where soil oxygen is limited during the growing season. Hydric soils have a thick layer of decomposing vegetation on the surface and are bluish gray below the surface.
• Wetland hydrology refers to the presence of water at or above the soils and plants. Wetlands are not always wet. Look for tell-tale signs including water marks on trees, drift lines, debris piles or a thin film of sediments on leaves and vegetation.
• Plant species tolerate wetness differently. Generally, trees and shrubs growing in a wetland have a shallow root system, a larger trunk at the base, and may have exposed roots near the surface of the ground. Wetland plants adapt to survive environmental conditions ranging from submersion in high water to prolonged drought.
• Missouri has lost 95% of its original wetlands. If you would take all of these wetlands that had been destroyed and squeeze them into an imaginary ribbon 100 yards wide, this ribbon would circle the earth six times.

Wetland Benefits
• Many wildlife species depend on wetland habitats for food, shelter and places to raise their young.
• Wetlands allow surface water to filter slowly through the soil recharging ground water.
• Large amounts of storm water are retained and absorbed by wetlands, which helps reduce flooding.
• At least 1/3 of the nation's threatened and endangered plants and animals depend on wetlands.
• Wetlands provide open space and recreational opportunities.
• Toxins and agriculture fertilizers filter through wetlands, cleansing the water. As much as 90% of dissolved nutrients such as nitrogen and phosphorus are absorbed by wetland vegetation.

The Future Is Just Beginning
• Today a .3 mile paved trail runs through the north end of the park and connects with trails leading to Old Towne Fenton and Fenton City Park. It terminates at Unger County Park, four miles to the north. Additional trails are planned to link Winter Park to Jefferson County's Winter Park, located just downstream.

Topics. This historical marker is listed in these topic lists: Animals • Environment • Parks & Recreational Areas • Waterways & Vessels. A significant historical month for this entry is April 1969.