A Tradition of Remembering, A Legacy of Preservation 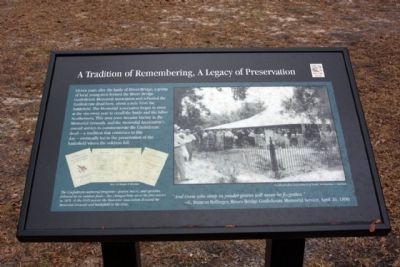 Photographed By Mike Stroud, January 2009
1. A Tradition of Remembering, A Legacy of Preservation Marker
Inscription.
A Tradition of Remembering, A Legacy of Preservation. . Eleven years after the battle of Rivers Bridge, a group of local young men formed the Rivers Bridge Confederate Memorial Association and reburied the Confederate dead here, about a mile from the battlefield. The Memorial Association began to meet at the site every year to recall the battle and the fallen Southerners. This area soon became known as the Memorial Grounds, and the Memorial Association's annual service to commemorate the Confederate dead - a tradition that continues to this day - eventually led to the preservation of the battlefield where the soldiers fell. . This historical marker was erected by South Carolina State Park Service. It is in Ehrhardt in Bamberg County South Carolina Photographed By South Carolina Dept, of Parks, Recreation & Tourism
2. A Tradition of Remembering, A Legacy of Preservation ( Left picture )
The Confederate memorial program ( courtesy of Mrs. Jo Bessie P. Bickley )- prayer, music, and speeches, followed by an outdoor feast - has changed little since the first service in 1876. At the 1945 service the Memorial Association donated the Memorial Grounds and battlefield to the state. 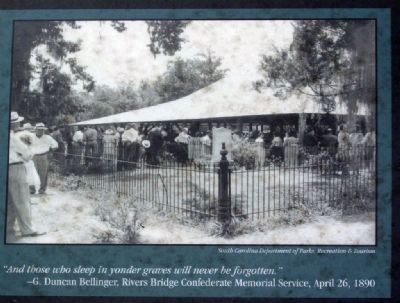 Photographed By South Carolina Dept, of Parks, Recreation & Tourism
3. A Tradition of Remembering, A Legacy of Preservation Marker, ( Right picture )
" And those who sleep in yonder graves will never be forgotten."
-G. Duncan Bellinger, Rivers Bridge Confederate Memorial Service, April 26, 1890 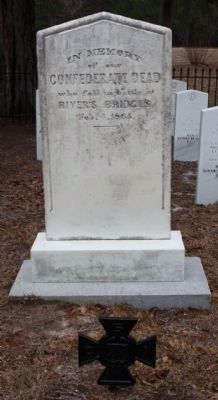 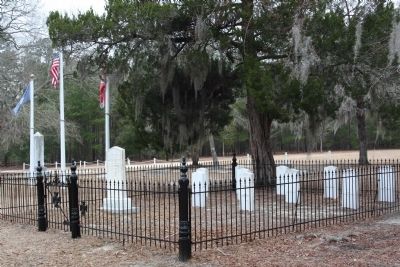 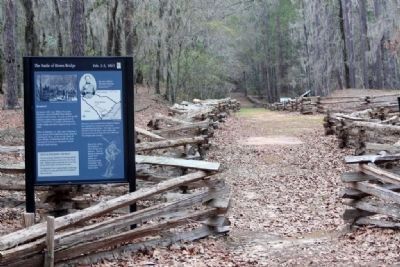 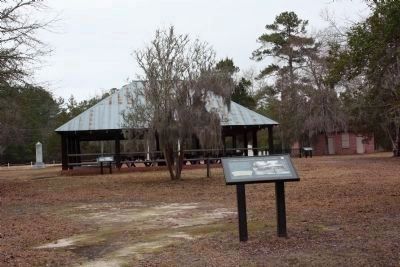 Photographed By Mike Stroud, January 2009
7. A Tradition of Remembering, A Legacy of Preservation Marker
Present shed constructed in 1972 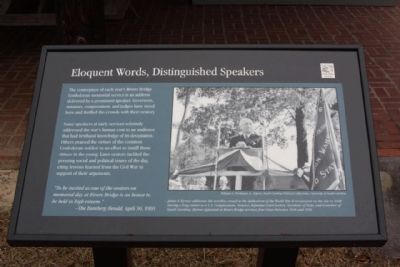 Photographed By Mike Stroud, January 2009
8. Plaque 2, Eloquent Words Distinguished Speakers
The centerpiece of each year's Rivers Bridge Confederate memorial service is an address delivered by a prominent speaker. Governors, senators, congressmen, and judges have stood here and thrilled the crowds with their oratory.
Some speakers at early services solemnly addressed the war's human cost to an audience that had firsthand knowledge of its devastion. Others praised the virtues of the common Confederate Soldier in an effort to instill those virtues in the young. Later orators tackled the pressing social and political issues of the day, citing lessons learned from the Civil War in support of their arguments.
" To be invited as one of the orators on memorial day at Rivers Bridge is an honor to be held in high esteem."
- The Bamburg Herald, April 30, 1903 South Carolina State Park Service 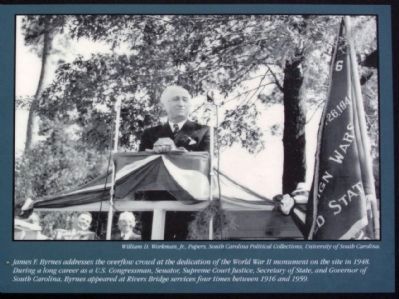 Picture from ; William D. Workman, Jr., Papers, South Carolina
9. Eloquent Words Distinguished Speakers
James F. Byrnes addresses the overflow crowd at the dedication of the WW II monument on the site in 1948. During a long carrer as a U.S. Congressman, Senator, Supreme Court Justice, Secretary of State, and Governor of South Carolina, Byrnes appeared at Rivers Bridge services four times between 1916 and 1959. 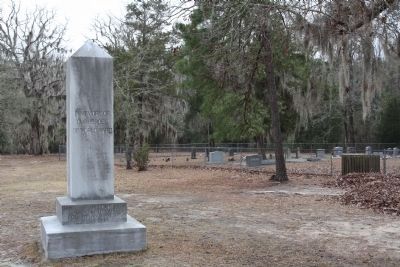 Photographed By Mike Stroud, 2009
10. WWII Memorial , as mentioned
WWII Memorial
In Memory Of
Our Heroes
Of World War II

Erected By The Counties Of
Allendale, Bamburg,
Colleton and Hampton
May 1, 1948 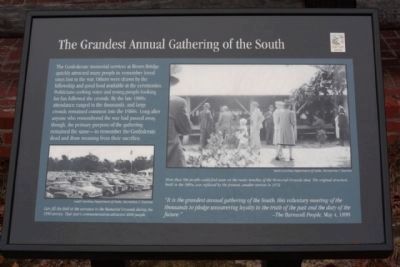 Photographed By Mike Stroud, January 2009
11. Plaque 3, The Grandest Annual Gathering of the South
The Confederate memorial services at Rivers Bridge quickly attracted many people to remember loved ones lost in the war. Others were drawn by the fellowship and good food available at the ceremonies. Politicians seeking votes and young people looking for fun followed the crowds. By the late 1800s attendance ranged in the thousands, and large crowds remained common into the 1960s. Lonf after anyone who remembered the war had passed away, though, the primary purpose of the gathering remained the same - to remember the Confederate dead and draw meaning from their sacrifice.
" It was the grandest annual gathering of the South, this voluntary meeting of the thousands to pledge unwavering loyalty to the truth of the past and the duty of the future."
- The Barnwell People, May 4, 1899
South Carolina State Park Service 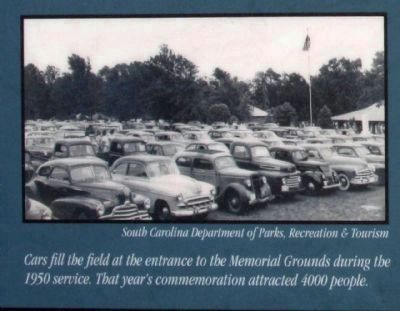 Photographed By ( South Carolina Dept. of Parks, Recreation, & Tourism )
12. Plaque 3 The Grandest Annual Gathering of the South,( Left picture )
Cars filled the field at the entrance to the Memorial Grounds during the 1950 service. That year's commemoration attracted 4,000 people. 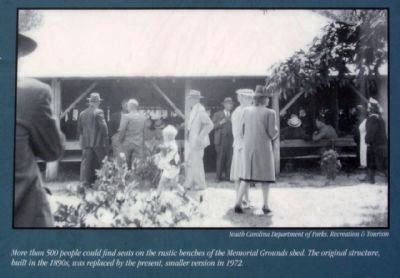 Photographed By ( South Carolina Dept. of Parks, Recreation, & Tourism )
13. The Grandest Annual Gathering of the South, ( Right picture )
More than five hundred people could find seats on the rustic benches of the Memorial Grounds shed. The original structure built in the 1890s, was replaced by the present, smaller version in 1972.