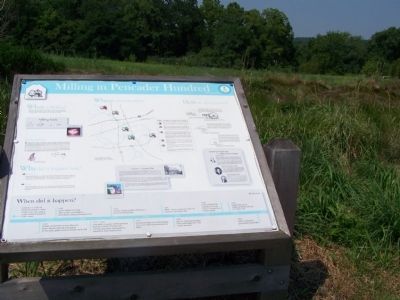 What is Milling?
Milling is a process of taking whole bulbs, tubers, nuts, seeds, grains or other foods from its original size to a smaller size by pounding, grinding or rolling it until it is the consistency of a meal, flour or powder.

This is a millstone located at the Dayett Mills Complex[.] [accompanied by picture]

Early Milling
From the beginning of history, man has known that grain was a great energy food. When he realized that grain could be planted and cultivated, it became possible for him to stop the wandering life and settle down in one spot. In order to get nutrition from the grain, the kernels had to be broken open. Man's teeth were the first grinding tools, but this was a very inadequate device. By trial and error, rocks were found that suited this purpose better. The rocks were saved instead of being thrown away after each use. As years passed, it was found that stones curved at both ends could keep the grain on the stone. By shaping the other stone into a roller, work could be completed much faster. This 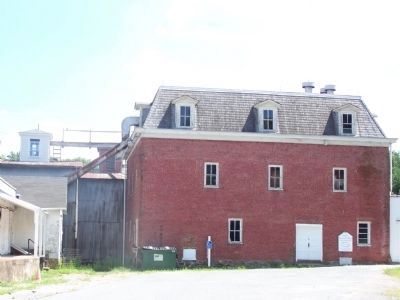 Click or scan to see
this page online
form was called a saddle stone (A). Eventually, a depression formed in the stone. Grain contained in this lower place was easier to pound and grind. From this idea, the development of the mortar and pestle evolved (B). They were used for thousands of years and many fine examples of these, as well as other grinding tools, have been found in excavations of ruins of American Indian civilizations.

Native Americans were the first settlers in the Pencader area. [accompanied by picture of a native]

Why did it happen here?
Location
Pencader Hundred was a transportation hub located midway between the Delaware River and the Chesapeake Bay. This location provided a convenient route for exportation of goods to Europe and to the Colonies to the North and South.
Power
The Christina River, which ran from the Piedmont Plateau onto the Coastal Plain, provided enough height (head) and volume of flow (energy) in order to turn the millstones.

Where were the mills?

This map reflects the waterways as they existed in the 1700-1800's. Current roads are shown for reference[.] 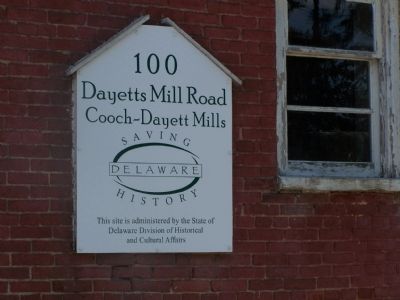 Photographed By William Pfingsten, August 3, 2008
3. Dayetts Mill Sign
is located in Pencader Hundred not far from Cooch's Bridge. It was the third mill build in the area by the Cooch family and is the only one that remains today. The mill was built in 1838 by William Cooch, Jr. It remained in the Cooch family until it was sold in 1894 to John W. Dayett. After the death of John Dayett, his wife Mary Emma Dayett sold the mill to Johnathan Irwin. William and Alberta Johnson along with Charles H. Goth purchased the mill in 1948.

The building in which the mill is housed is brick, three and one-half stories, measuring fifty feet square. It was operated by waterpower, but in 1884 was remodeled and refitted to include engines for use when water supply was insufficient. Two fires, one in 1916 and the other in 1933, caused minor damage allowing the mill to be restored with the most notable change being to the roof. The millrace starts a little more than three-quarters of a mile north of the mill.

The mill remained in operation until the 1990's. It was sold to the State of Delaware under the control of the Division of Historical and Cultural Affairs with Raynor A. Johnson as the site manager. When the mill closed its operation, it was one of only two operating mills in Delaware; the other is Hearn's Mill in Seaford.
[illustration at left] A recent picture taken at the Dayett Mill complex


Mills of Pencader Hundred
William McConaughy operated a sawmill in 1833 on the Christina River with the mill pond extending North to Elkton Road. The mill was in the area of Persimmon Run. Nothing of the mill remains today.

Andrew Fisher operated a gristmill just South of Chestnut Hill Road. General George Washington requested that all millstones be removed prior to the British arrival but Fisher failed to remove the stones and the British used the mill in 1777 during the Battle of Cooch's Bridge. The mill burned down in 1883 never to be rebuilt.

Four generations of the Cooch family have been millers in Pencader Hundred. Thomas Cooch, the first generation, came to Pencader in 1746 and bought a gristmill and a sawmill. Thomas Cooch Jr. was a miller until the British burned the mill in 1777. The third generation was William Cooch who built the second mill in 1792 just East of the bridge. A granary now stands over the old foundation. William Cooch died in 1837 and two of his sons, William and Zebulon, took over the milling business until it was sold to John Dayett in 1894.

Alexander Porter operated a gristmill on Sunset Lake, just South of Dayett Mills, from 1760 to 1769 when it was purchased by David and Samuel Porter. Adam Dayett ran this mill as Valley Mill until 1888. It continued in operation by Irvin Dayett until 1932. Nothing of the mill remains today.

John Janvier built a sawmill and a gristmill in 1839 at Beck's Pond. Other owners were Porter, Kensey Johns, J. A. Kendal, Tatnall, Kyle Johns (who added a distillery), and William Kyle. The mill was torn down in 1865.

How are they powered?
The breast waterwheel uses the same design as the overshot waterwheel with the buckets. The water hits the waterwheel in the middle, propelling the wheel down. This type of wheel was used when the flow of water wasn't swift enough to power an undershot wheel but the flow had enough velocity so that an overshot was not required.
Breast Waterwheel [accompanied by figure]
Illustration of a middle (top) and high breast wheel, from 'The Young Mill-Wright and Miller's Guide' by Oliver Evans, 1834 edition. Year: 1834. Image Credit National Park Service Photo courtesy of National Capital Parks.

Leading Americans in Milling Technology
Oliver Evans
Oliver Evans' mill designs became popular in the beginning of the 1800's. He developed a system of conveying grain through the milling process using one of the first concepts of an assembly line. This system was used in Cooch's Mill. He also developed a high pressure steam engine using a cooling coil. This was the forerunner of modern refrigeration systems. These inventions expedited the milling process and enabled the mills to be more profitable. Evans was an author as well as a miller and inventor. He wrote and published "The Young Millwright's & Miller's Guide" in 1795.
Benjamin Henry Latrobe
Benjamin Latrobe designed a new water power system for milling by raising the dams and placing raceways (canals) along elevation lines between the Coastal Plain and the Piedmont Plateau. He was instrumental in designing the Philadelphia Water Works, the C&D feeder canal system and the national Capitol Building.
George Washington
George Washington was not only the first President but he was also a leading organic farmer of his time. As a friend and customer of Oliver Evans, Washington advised him on how to dry and clean grain, improve crop management, keep accurate records and provided techniques for profitable marketing.

When did it happen?
5,000 BC to 2700 AD : American Indians milled maize (corn) by using a crude mortar & pestle to make meal.
1638 : Swedes arrived with round millstones which allowed greater processing of domestic grains such as wheat, rye & oats. 1658 : Dutch settlers built mills utilizing their knowledge of windmills & water powered pumps.
1717-1723 : Lord Keith, Governor of Pennsylvania and the three lower Counties (DE), constructed dams, spillways and a sawmill on the Christina River.
1746 : Thomas Cooch builds a third dam on the Christina River.
1777 : During the Battle of Cooch's Bridge the Cooch Mill was burned by the British.
1828 : William Cooch builds the third mill now known as Dayett Mills.
1849 : John W. Dayett purchased mill and water rights from the Cooch brothers.
1933 : A fire at Dayett Mill resulted in the roof being changed to its current design.
1948 : Dayett Mills sold to William & Alberta Johnson & Charles Golt.
1996 : State of Delaware purchased Dayett Mills.

Topics. This historical marker is listed in these topic lists: Colonial Era • Government & Politics • Industry & Commerce • Waterways & Vessels. A significant historical year for this entry is 1838.

Location. 39° 38.462′ N, 75° 43.941′ W. Marker is near Newark, Delaware, in New Castle County. Marker is on Dayett Mills Road south of Old Baltimore Pike, on the right when traveling south. Touch for map. Marker is in this post office area: Newark DE 19702, United States of America. Touch for directions.