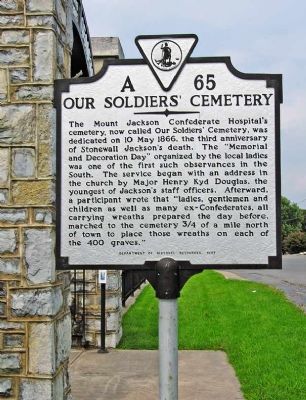 Photographed By Linda Walcroft, August 28, 2007
1. Marker, Our Soldiers' Cemetery
Inscription.
Our Soldiers’ Cemetery. . The Mount Jackson Confederate Hospital’s cemetery, now called Our Soldiers Cemetery, was dedicated on May 10, 1866 the third anniversary of Stonewall Jackson’s death. The “Memorial and Decoration Day” organized by the local ladies was one of the first such observances in the South. The service began with an address in the church by Major Henry Kyd Douglas, the youngest of Jackson’s staff officers. Afterward, a participant wrote that “ladies, gentlemen and children as well as many ex-Confederates, all carrying wreaths prepared the day before, marched to the cemetery ¾ of a mile north of town to place those wreaths on each of the 400 graves.” . This historical marker was erected in 1997 by the Department of Historic Resources. It is in Mount Jackson in Shenandoah County Virginia

The Mount Jackson Confederate Hospital’s cemetery, now called Our Soldiers Cemetery, was dedicated on May 10, 1866 the third anniversary of Stonewall Jackson’s death. The “Memorial and Decoration Day” organized by the local ladies was one of the first such observances in the South. The service began with an address in the church by Major Henry Kyd Douglas, the youngest of Jackson’s staff officers. Afterward, a participant wrote that “ladies, gentlemen and children as well as many ex-Confederates, all carrying wreaths prepared the day before, marched to the cemetery ¾ of a mile north of town to place those wreaths on each of the 400 graves.”

Erected 1997 by the Department of Historic Resources. (Marker Number A-65.)

Topics and series. This historical marker is listed in these topic lists: Cemeteries & Burial Sites • War, US Civil. In addition, it is included in the Virginia Department of Historic Resources series list. A significant historical month for this entry is May 1861. 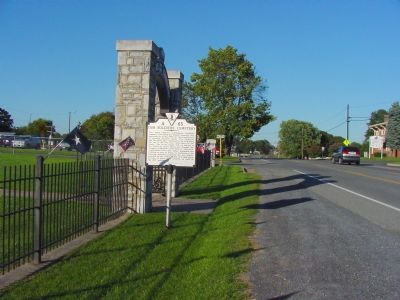 Click or scan to see
this page online
in Mount Jackson, Virginia, in Shenandoah County. Marker is on Main Street (U.S. 11) south of Nelson Street (Local Route 1314), on the left when traveling north. Touch for map. Marker is in this post office area: Mount Jackson VA 22842, United States of America. Touch for directions.

Related markers. Click here for a list of markers that are related to this marker. Shenandoah County Civil War related Markers.

The Sword of Robert Lee
by Abram Joseph Ryan 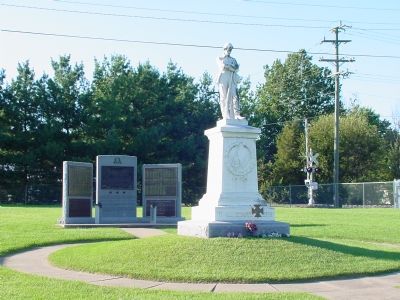 Front (east) face: Erected by the Mount Jackson Chapter of The United Daughters of the Confederacy, May 1908.

South face: "Nor shall your glory be forgot / While fame her record keeps."

The quote on the back face is from the King James version of the Book of Psalms, Psalm 39, verse 7.
from its scabbard pure and bright,
Flashed the sword of Lee!
Far in the front of the deadly fight
High o’er the brave in the cause of Right
Its stainless sheen like a beacon light
Led us to Victory.

Out of its scabbard where full long
It slumbered peacefully,—
Roused from its rest by the battle’s song
Shielding the feeble, smiting the strong
Guarding the right, avenging the wrong
Gleamed the sword of Lee.

Forth from its scabbard high in air
Beneath Virginia’s sky—
And they who saw it gleaming there
And knew who bore it knelt to swear,
That where that sword led, they would dare
To follow and to die.

Out of its scabbard!—never hand
Waved sword from stain as free,
Nor purer sword led braver band,
Nor braver bled for a brighter land,
Nor brighter land had a Cause so grand,
Nor cause a chief like Lee.

Forth from its scabbard! how we prayed,
That sword might victor be;—
And when our triumph was delayed,
And many a heart grew sore afraid,
We still hoped on while gleamed the blade
Of noble Robert Lee.

Forth from its scabbard! all in vain
Bright flashed the sword of Lee;—
’Tis shrouded now in its sheath again,
It sleeps the sleep of our noble slain;
Defeated yet 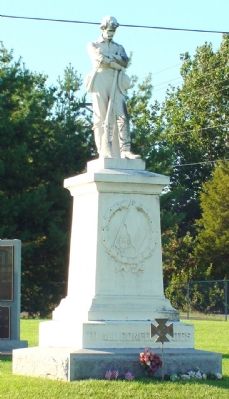 Photographed By J. J. Prats, September 25, 2006
4. UDC "To All Confederates" Monument
without a stain,
Proudly and peacefully.
— Submitted January 4, 2007, by J. J. Prats of Powell, Ohio.
2. The Bivouac of the Dead
The stanzas quoted on the south face of this monument are from the 1847 poem “The Bivouac of the Dead” by Theodore O’Hara. It was written to honor the dead during the Mexican-American War. Many of the soldiers and officers on both sides of the War Between the States were Mexican-American War veterans. The full poem is reproduced below.

The Bivouac of the Dead
by Theodore O’Hara

The muffled drum’s sad roll has beat
The soldier’s last Tattoo;
No more on life’s parade shall meet
That brave and fallen few.
On Fame’s eternal camping ground
Their silent tents are spread,
And glory guards, with solemn round
The bivouac of the dead.

No rumour of the foe’s advance
Now swells upon the wind;
No troubled thought at midnight haunts
Of loved ones left behind.
No vision of the morrow’s strife
The warrior’s dream alarms;
No braying horn, nor screaming fife,
At dawn shall call to arms.

Their shivered swords are red with rust,
Their plumed heads are bowed;
Their haughty banner, trailed in dust,
Is now their martial shroud.
And 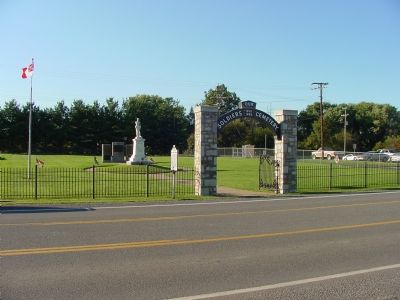 Photographed By J. J. Prats, September 25, 2006
5. Our Soldiers' Cemetery
plenteous funeral tears have washed
The red stains from each brow;
And the proud forms, by battle gashed,
Are free from anguish now.

The neighing troop, the flashing blade,
The bugle’s stirring blast,
The charge, the dreadful cannonade,
The din and shouts are past;
Nor war's wild note, nor glory's peal,
Shall thrill with fierce delight;
Those breasts that never more may feel
The rapture of the fight.

Like the fierce Northern hurricane
That sweeps the great plateau,
Flushed with triumph, yet to gain,
Come down the serried foe;
Who heard the thunder of the fray
Break o’er the field beneath,
Knew the watchword of the day
Was “Victory or death!”

Long had the doubtful conflict raged
O’er all that stricken plain,
For never fiercer fight had waged
The vengeful blood of Spain;
And still the storm of battle blew,
Still swelled the glory tide;
Not long, our stout old Chieftain knew,
Such odds his strength could bide.

Twas in that hour his stern command
Called to a martyr’s grave
The flower of his beloved land,
The nation’s flag to save.
By rivers of their father’s gore
His first-born laurels grew,
And well he deemed the sons would pour
Their lives for glory too.

For many a mother’s breath has swept
O’er 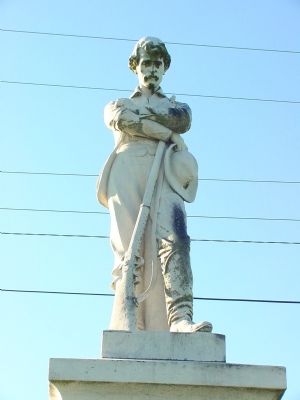 Photographed By J. J. Prats, September 25, 2006
6. "To All Confederates" Statue
Angostura’s plain,
And long the pitying sky has wept
Above its moldered slain.
The raven’s scream, or eagle’s flight,
Or shepherd’s pensive lay,
Alone awakes each sullen height
That frowned o’er that dread fray.

Sons of the Dark and Bloody Ground
Ye must not slumber there,
Where stranger steps and tongues resound
Along the heedless air.
Your own proud land’s heroic soil
Shall be your fitter grave;
She claims from war his richest spoil,
The ashes of her brave.

Thus ’neath their parent turf they rest,
Far from the gory field,
Borne to a Spartan mother’s breast
On many a bloody shield;
The sunshine of their native sky
Smiles sadly on them here,
And kindred eyes and hearts watch by
The heroes sepulcher.

Rest on, embalmed and sainted dead,
Dear as the blood ye gave,
No impious footstep here shall tread
The herbage of your grave.
Nor shall your glory be forgot
While fame her record keeps,
For honor points the hallowed spot
Where valor proudly sleeps.

Yon marble minstrel’s voiceless stone
In deathless song shall tell,
When many a vanquished age hath flown,
The story how ye fell.
Nor wreck, nor change, nor winter’s blight,
Nor time’s remorseless doom,
Shall dim one ray of glory’s light
That gilds your 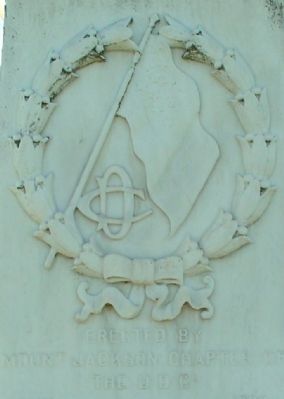 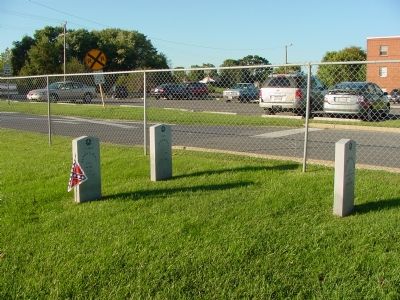 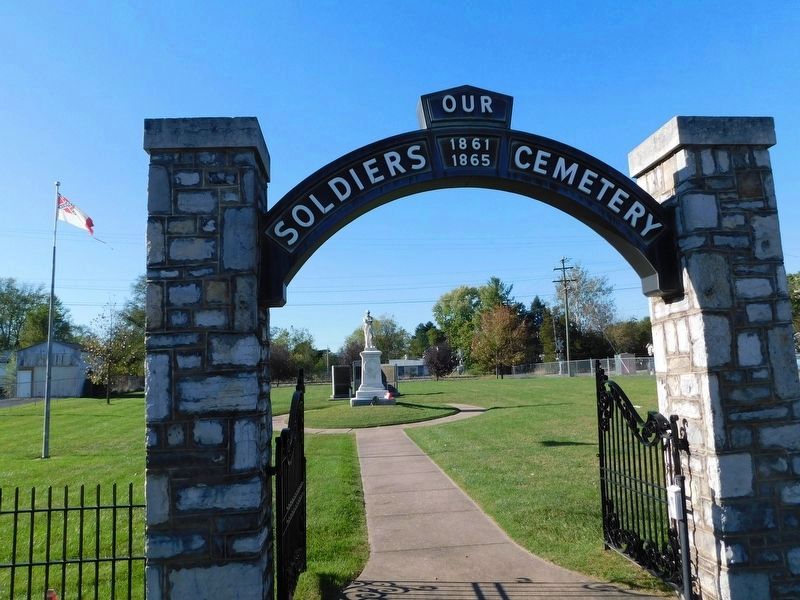 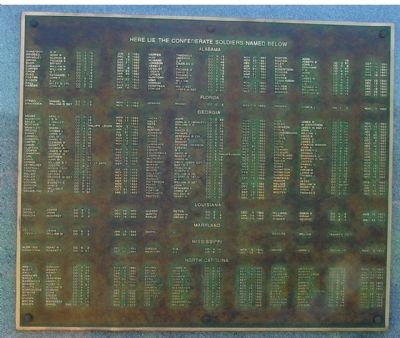 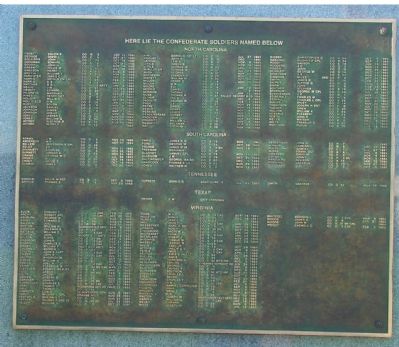 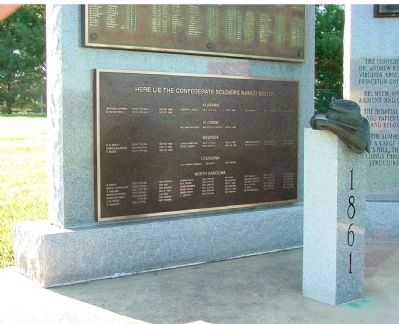 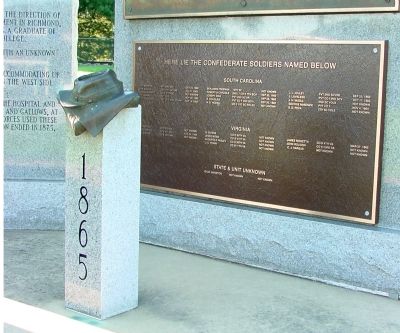 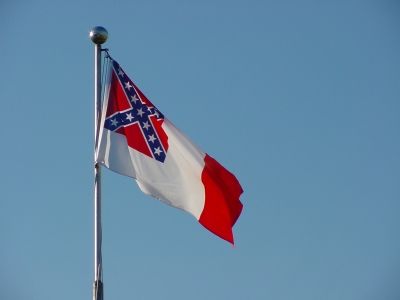