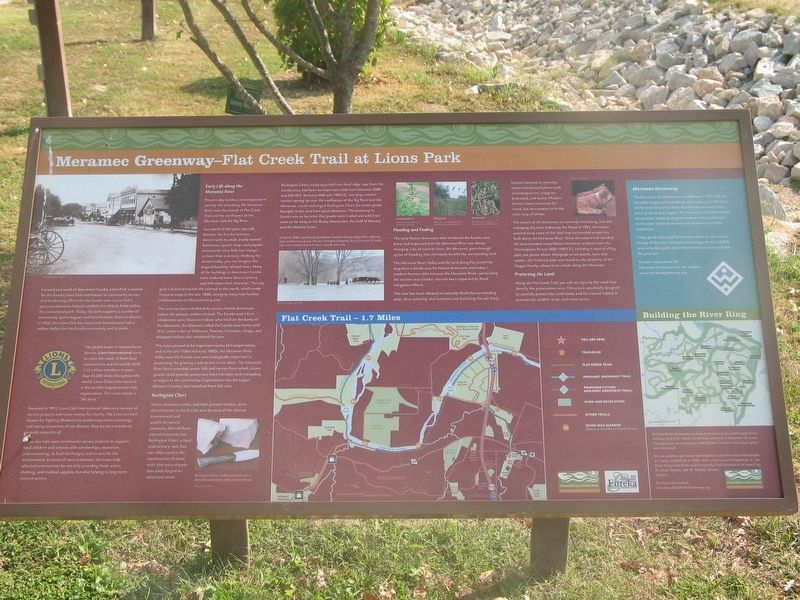 Located just south of downtown Eureka, Lions Park is named for the Eureka Lions Club and honors its community service and fundraising efforts for the Eureka area. Lions Club's generous donation helped established the athletic fields within the recreational park. Today, the park supports a number of community sports leagues and local festivals. Since its charter in 1950, the Lions Club raised and donated over half a million dollars for the Eureka community and its parks.

The global leader in humanitarian service, Lions International serve to meet the needs of both local communities and the world. With 1.35 million members in more than 45,000 clubs throughout the world, Lions Club International is the world's largest service club organization. The Lions motto is "We Serve."

Founded in 1917, Lions Club International takes on a number of service projects and raises money for charity. The Lions are best known for fighting blindness by conducting vision screenings and raising awareness of eye disease; they are on a mission to provide vision for all. 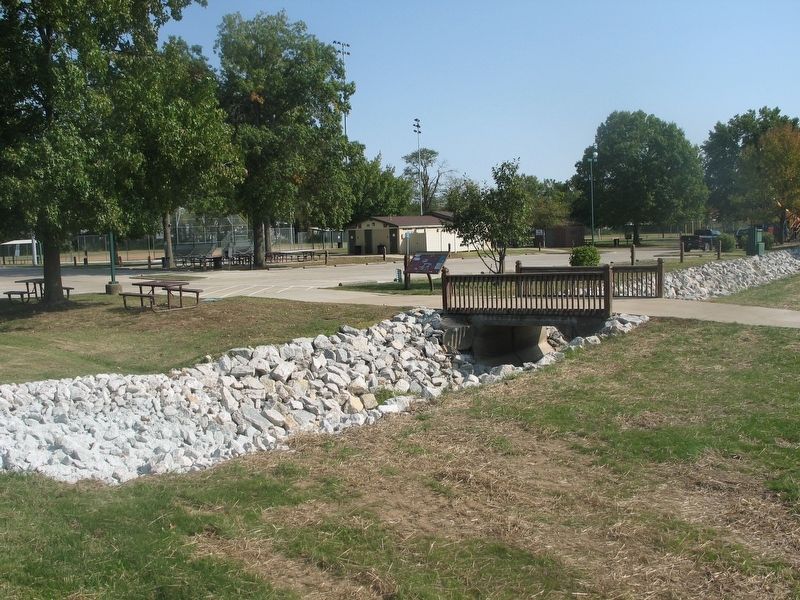 Click or scan to see
this page online
to support local children and schools with scholarships, recreation, and mentoring; to feed the hungry; and to care for the environment. In times of natural disaster, the Lions help affected communities by not only providing food, water, clothing, and medical supplies, but also help in long-term reconstruction.

Just north of this park, you will discover the Eureka business district with its small, locally owned businesses, quaint shops and popular restaurants. Very little has change in more than a century. Walking the streets today, you can imagine the original bustling railroad town. Many of the buildings in downtown Eureka have endured more than a century and still retain their character. The city grid is oriented toward the railroad to the north, which made frequent stops in the late 1800s, bringing many new families and businesses to this promising area.

This area has been inhabited by various Native Americans before the pioneer settlers arrived. The Eureka area's first inhabitants were Shawnee Indians who lived on the banks of the Meramec; the Shawnee called the Eureka area home until 1812, when tribes of Delaware, Pawnee, Cherokee, 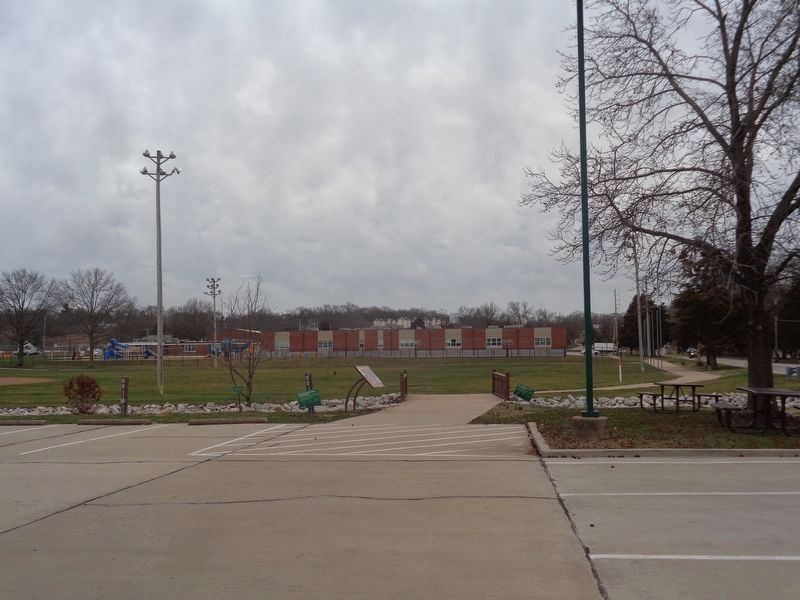 The rivers proved to be important routes of transportation, and in the late 1700s and early 1800s, the Meramec River Valley near the Eureka area was strategically important in protecting the growing trade center in the West. The Meramec River Basin provided ample hills and ravines from which citizens guards could provide protection from intruders and marauding strangers to the community. Exploration into the Upper Missouri Country also launched from this area.

Burlington Chert
Native American tribes, and later pioneer settlers, were also attracted to the Eureka area because of the diverse environment and wealth of natural resources. One of these natural resources was Burlington Chert, a hard, sedimentary rock that was often used in the construction of stone tools that were sharper than tools forged in metal and wood.

Burlington Chert, easily quarried from local ridge tops from the Eureka area, had been an important trade item between 3000 and 600 BCE. Between 800 and 1400 CE, two large market centers sprang up near the confluence of the Big River and the Meramec. Locals exchanged Burlington Chert for exotic goods brought to the area from great distances. The economy in Eureka was so lucrative that goods were traded and sold from areas as far away 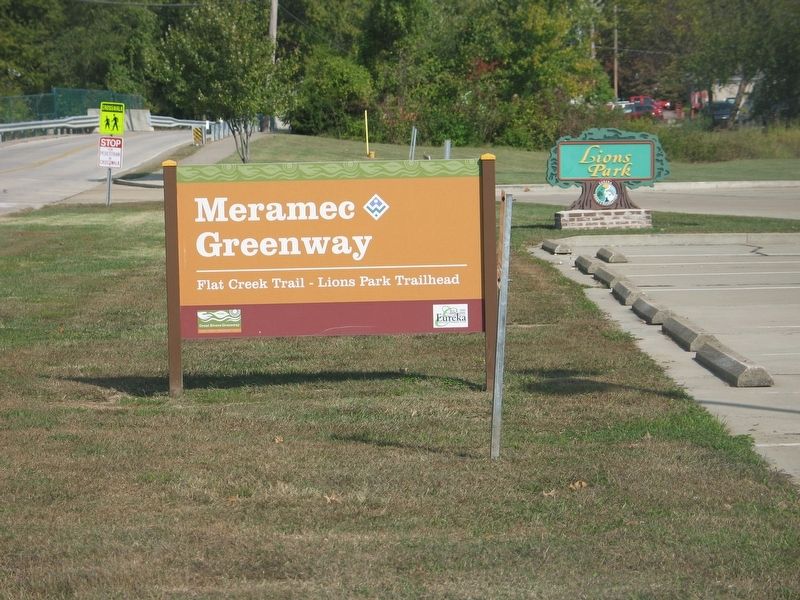 Photographed By Carl Scott Zimmerman, June 10, 2020
4. Meramec Greenway sign at Lions Park entrance
as the Rocky Mountains, the Gulf of Mexico, and the Atlantic Coast.

Flooding and Finding
The early Native Americans who inhabited the Eureka area knew and respected that the Meramec River was always changing. Like all natural rivers, the Meramec goes through cycles of flooding that ultimately benefit the surrounding land.

The Meramec River Valley and the land along Flat Creek has long been a fertile area for Native Americans and today's modern farmers alike because the Meramec River—particularly the section near Eureka—has not been impacted by mitigation efforts.

The river has been allowed to naturally flood the surrounding plain, thus restoring vital nutrients and fertilizing the soil. Early farmers focused on growing native starchy seed plants such as lambsquarters, maygrass, knotweed, and barley. Modern farmers have continued this trend, but corn proves to be the main crop of choice.

The waters of the Meramec are not only revitalizing, but also reshaping the land. Following the flood of 1983, the waters washed away some of the land that surrounded properties built along the Meramec River. Once the waters had receded, the land revealed many Native American artifacts from the Mississippian Period (800-1400 CE), including a squirrel effigy pipe, see photo above. Alongside arrow points, axes, and spades, the fired clay pipe was found on the property of the Geggie Family, whose farm is built along the Meramec.

Protecting the Land
Along the Flat Creek Trail, you will see signs by the creek that identify the preservation area. This area is specifically designed to carefully protecting the creek banks and the natural habitat it provides for wildlife, birds, and native plants.

Meramec Greenway
The Meramec Greenway was established in 1975 with the mandate to plan and coordinate the recovery of 108 miles of the lower Meramec River that had deteriorated from years of abuse and neglect. The Meramec River Recreation Association, made up of governments with jurisdiction on the river and area citizens, was formed to lead the restoration.

Today good water quality has been restored, the natural beauty of the river setting is recovering and over 28,000 acres of public parks and conservation areas are available for your use.

To learn more about the Meramec Greenway visit the website: www.meramecgreenway.org

Building the River Ring
At Great Rivers Greenway, our long-term vision is one united region from the Katy Trail in St. Charles to the Gateway Arch in downtown St. Louis. The region we are working to build will be a healthier one—clean, green and connected.

We are a public organization working to carry out the vision of the people we serve, established in 2000 when voters passed Proposition C, the Clean Water, Safe Parks and Community Trails Initiative in St. Louis City, St. Louis County and St. Charles County, Missouri.

Erected by Great River Greenway and City of Eureka.

Topics. This historical marker is listed in these topic lists: Native Americans • Natural Resources • Settlements & Settlers • Waterways & Vessels. A significant historical year for this entry is 1950.

Location. 38° 29.908′ N, 90° 37.84′ W. Marker is in Eureka, Missouri, in St. Louis County. Marker is on Bald Hill Road, 0.1 miles north of Weber Drive, on the right when traveling north. The marker is in Lions Park, at the north end of the footbridge at the southwest corner of the south parking lot. Touch for map. Marker is at or near this postal address: 340 Bald Hill Rd, Eureka MO 63025, United States of America. Touch for directions.