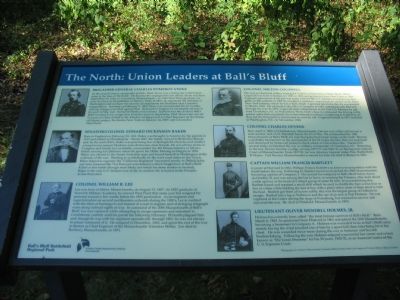 Brigadier General Charles Pomeroy Stone
As the overall commander of Union forces at Ball’s Bluff, Stone was a rising star in the Union army at the time of the battle. He became the scapegoat for the defeat. Stone was born September 30, 1824, in Greenfield, Massachusetts. An 1845 West Point graduate, he won two brevets for gallantry in Mexico. Early in 1861, he organized the defenses of Washington and oversaw security arrangements for President-elect Lincoln’s inauguration. Arrested on February 8, 1962, Stone was incarcerated for six months with no charges ever filed against him. Released in August, he eventually served on the staff of Maj. Gen. Nathaniel Banks in Louisiana. Typhoid and the cloud of Ball’s Bluff resulted in his resignation from the army in September, 1864. Stone later served 12 years as Chief of Staff to the Khedive of Egypt and as Chief Engineer on the Statue of Liberty project. He died in New York on January 24, 1887, and is buried at West Point.

Senator/Colonel Edward Dickinson Baker
Born in England on February 24, 1811, Baker was brought to America by his parents in 1815 and settled in Philadelphia. 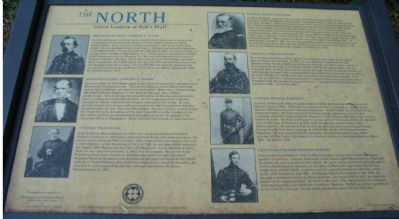 By Craig Swain, July 30, 2007
2. The Previous Marker Replaced in August 2007
While the leaders profiled remain the same, the text between the two markers is markedly different in the details. Space does not permit complete citation of the old text.
About 1827, the family moved to Belleville, Illinois and, by the mid-1830s, Baker was practicing law in Springfield where he and another young lawyer named Abraham Lincoln became close friends. He served two terms in Congress and briefly but creditably commanded the 4th Illinois infantry in Mexico before moving to California where he spent the 1850s. Moving to Oregon in 1859, Baker helped to organize the “California Regiment” (recruited mostly in Philadelphia and later renamed the 71st Pennsylvania Infantry) which fought here at Ball’s Bluff. Killed at this battle (though most likely not where his stone marker is located), Baker is the only U.S. Senator ever to die in combat. He is buried at the Presidio in San Francisco.

Colonel William R. Lee
Lee was born in Salem, Massachusetts, on August 15, 1807. An 1825 graduate of Norwich Military Academy, he entered West Point that same year but resigned for personal reasons a few weeks before his 1829 graduation. As an engineer and superintendent on several northeastern railroads during the 1850s, Lee is credited with the ideas of burning coal instead of wood in engines and of stringing telegraph wires along railroad rights of way. In command of the 20th Massachusetts at Ball’s Bluff, Lee was captured while attempting to escape upstream and remained in Confederate custody until his parole the following February. 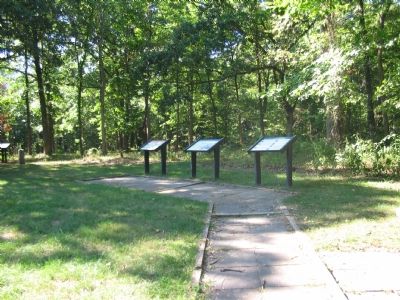 By Craig Swain, July 30, 2007
3. The North - Union Leaders at Ball's Bluff Marker
The Northern Leaders Marker is on the left and the Southern Leaders Marker on the right. The marker in the center discusses the battle.
Ill health plagued him and, though he was with his regiment sporadically through 1862, he was not always in actual command of it. He resigned in December, 1862, and spent the rest of the war in Boston as Chief Engineer of the Massachusetts Volunteer Militia. Lee died in Roxbury, Massachusetts, in 1891

Colonel Milton Cogswell
The only professional soldier among the Federal commanders at Ball’s Bluff, Milton Cogswell was born in Indiana in 1825 or 1826 and graduated from West Point in 1849. Cogswell spent most of the pre-war years with the 8th U.S. Infantry at various western posts. In the summer of 1861 he accepted a volunteer commission as a colonel of the 42nd New York Infantry which he led at Ball’s Bluff. Captured late in the day, he was paroled in March, 1862. He returned to the 8th U.S. Infantry in 1863, remaining with that unit through the war. In 1869, Cogswell took a detachment of the 21st U.S. Infantry by rail from Charleston, S.C. to Promontory Point, Utah where he witnessed the driving of the golden spike that completed the transcontinental railroad. Continuing to California, he thus led the first party to travel coast to coast by rail. Cogswell retired in 1871 and died in Washington, D.C., in November, 1882.

Colonel Charles Devens
Born April 4, 1820, in Charlestown, Massachusetts, Devens was a Harvard lawyer, a state senator, and a U.S. Marshall before the Civil War. He commanded the 15th Massachusetts at Ball’s Bluff, his men being the first Union troops on the field. Devens is probably best known as the commander of the XI Corps division that was surprised and destroyed by Stonewall Jackson’s flank attack at Chancellorsville. Transferred several times, he finished the war as military commander of Charleston, S.C. Returning to the law, Devens became a judge, serving 1873-77 and 1881-91 on the Supreme Judicial Court of Massachusetts. From 1877-81, he was Attorney General under Pres. Rutherford B. Hayes. Fort Devens, Massachusetts is named for him. He died in Boston in 1891.

Captain William Francis Bartlett
A junior at Harvard in 1861, William Francis Bartlet was known to sympathize with the South before the war. Following Ft. Sumter, however, he joined the 20th Massachusetts, becoming captain of Company I. He crossed his company to Ball’s Bluff before dawn on October 21 and was among the last to leave, re-crossing the Potomac after dark about a mile upriver at the head of a mixed group of some 80 men. In accomplishing this, Bartlett found and repaired a small skiff which he used to shuttle the men across four or five at a time while holding the rest at bay with a pistol when some of them tried to rush the boat. Bartlett got all of them across safely; this was the largest group of Federals to escape. Bartlett lost a leg at Yorktown and the use of an arm at Port Hudson. He was captured at the Crater during the siege of Petersburg, but returned to service and survived the war. He died in Pittsfield, Massachusetts, in 1876.

Lieutenant Oliver Wendell Holmes
Holmes has correctly been called “the most famous survivor of Ball’s Bluff.” Born March 8, 1841, he graduated from Harvard in 1861 and joined the 20th Massachusetts, becoming a lieutenant in Company A. Holmes was wounded twice at Ball’s Bluff; once mearly having the wind knocked out of him by a spent ball, then later being hit in the chest. He was wounded twice more during the war at Antietam and Second Fredericksburg. Following the war, Holmes enjoyed a successful law career and is best known as “The Great Dissenter” for his 30 years, 1902-32, as an Associate Justice of the U.S. Supreme Court.

Topics and series. This historical marker is listed in this topic list: War, US Civil. In addition, it is included in the NOVA Parks 🏞️ series list.

Location. 39° 7.915′ N, 77° 31.673′ W. Marker is in Leesburg, Virginia, in Loudoun County. Marker can be reached from Ball’s Bluff Road, on the left when traveling east. Located to the west of the National Cemetery in Ball’s Bluff Regional Park. Touch for map. Marker is in this post office area: Leesburg VA 20175, United States of America. Touch for directions.

Regarding The North: Union Leaders at Ball's Bluff. This marker is one of a set along the Balls Bluff Battlefield walking trail. See the Balls Bluff Virtual Tour by Markers link below for details on each stop.

Also see . . .
1. Staff Ride Guide for the Battle of Balls Bluff. Contains more details of the leaders engaged in the battle. (Submitted on August 31, 2007, by Craig Swain of Leesburg, Virginia.)

2. Balls Bluff Battlefield Virtual Tour by Marker. Over twenty markers detail the action at Balls Bluff and related sites. Please use the Click to map all markers shown on this page option at the bottom of the page to view a map of the marker locations. The hybrid view offers an excellent overlook of the park. (Submitted on November 11, 2007, by Craig Swain of Leesburg, Virginia.)
Credits. This page was last revised on October 9, 2020. It was originally submitted on August 31, 2007. This page has been viewed 1,749 times since then and 6 times this year. Last updated on October 8, 2020, by Bradley Owen of Morgantown, West Virginia. Photos:   1. submitted on September 1, 2007, by Craig Swain of Leesburg, Virginia.   2, 3. submitted on August 31, 2007, by Craig Swain of Leesburg, Virginia. • J. Makali Bruton was the editor who published this page.
Share This Page.