Photographed By Syd Whittle, February 3, 2009
1. The Treasured American River Marker
Inscription.
The Treasured American River. . , The river before you is not the same river that flowed through here 200 years ago when the Nisenan Indians caught salmon and collected acorns along its bank. The river has been mined, dammed and surrounded by our cities, yet it still supports healthy runs of Chinook salmon and steelhead. The American River remains a vital part of our region and its protection is in your hands. . This historical marker is in Gold River in Sacramento County California

The river before you is not the same river that flowed through here 200 years ago when the Nisenan Indians caught salmon and collected acorns along its bank. The river has been mined, dammed and surrounded by our cities, yet it still supports healthy runs of Chinook salmon and steelhead. The American River remains a vital part of our region and its protection is in your hands.

Other nearby markers. At least 8 other markers are within 4 miles of this marker, measured as the crow flies. The Coloma Road (approx. half a mile away); Heroes in the Sky (approx. 0.6 miles away); We Will Not Forget... 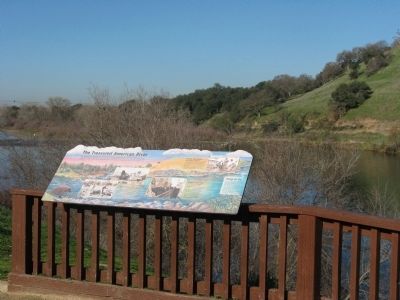 Also see . . .  Nimbus Fish Hatchery. Govserve website entry:
At one time, the American River provided approximately 100 miles of stream in which salmon and steelhead could spawn and rear. When the Folsom-Nimbus project was completed in 1958, most of the spawning and rearing areas were cut off. Nimbus Salmon and Steelhead Hatchery was constructed to replace the salmon and steelhead runs that were blocked by Nimbus and Folsom dams. (Submitted on February 3, 2009, by Syd Whittle of Mesa, Arizona.)

Additional commentary.
1. Nimbus Dam and Lake Natomas
Nimbus Dam is on the American River in Sacramento County, California, 7 miles downstream from Folsom Dam. It reregulates the releases for power made through the Folsom Powerplant.
Nimbus Dam is a concrete gravity dam 1,093 feet long and 87 feet high. Eighteen radial gates, each 40-feet by 24-feet, control the flows. The total volume of 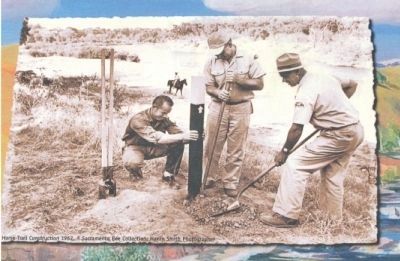 Photographed By Syd Whittle, February 3, 2009
3. Close-Up of Photo on Marker
HOMES, RECREATION AND OPEN SPACE! reflects our current relationship to the American River. The Sacramento metropolitan area has literally grown up around the river. In 1962 visionary community leaders adopted the first parkway plan and the county purchased lands adjoining the river to create the 23-mile-long American River Parkway.

Horse Trail Construction 1962 - Sacramento Bee Collection, Harlin Smith-Photographer
material used in the dam is 121,100 cubic yards. Reclamation operates the dam.
Nimbus Dam and Powerplant was completed and accepted by the Government in July 1955.
Nimbus Dam forms Lake Natoma, with a capacity of 8,760 acre-feet and a surface area of 540 acres.

Nimbus Powerplant:
Nimbus Powerplant, constructed and operated by Reclamation, is located on the right abutment of Nimbus Dam, on the north side of the river. Each of its two generators has a capacity of 7,763 kilowatts, with a combined output of 3,500 kilowatts. Water is supplied to two 9,400 horsepower turbines that drive the generators through six 46.5-foot-long by 13.75-foot by 15.95-foot penstocks. It started operating in 1955.
The powerplant consists of two vertical shaft, synchronous, 3-phase generators with a combined rating of 13.5 MW. The generators were manufactured by the Elliot Company under Specification Number DC-3696. The generators are rated at 6.75 MVA at 0.90 power factor, 150 rpm, 4.16 kV, 60 hertz. The turbines are Kaplan type rated at 41.5-foot head.
Reclamation operates this powerplant. 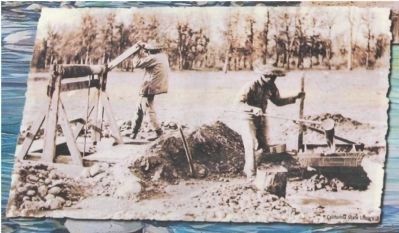 Photographed By Syd Whittle, February 3, 2009
4. Close-Up of Photo on Marker - Chinese Miners
GOLD! was discovered at Sutter’s Mill about 30 miles upstream in 1848. Here on the banks of the American River, Chinese miners dug deep trenches into the gold-bearing gravel and washed out the gold in pans and sluices. Starting in the late 1890’s huge gold dredges scooped up mountains of gravel from the ancient riverbed between Sunrise Boulevard and Folsom’s old town. By 1962 when dredging stopped, more than $125 million worth of gold was removed from the gravel, but miles of salmon spawning beds lay in ruin.

California State Library
flood control unit, Folsom Dam was reauthorized in 1949 as a 1,000,000 acre-feet multiple-purpose facility. The U.S. Army Corps of Engineers constructed Folsom Dam and transferred it to Reclamation for coordinated operation as an integral part of the Central Valley Project.
Construction of the dam began in October 1948 and was completed in May 1956. Water was first stored in February 1955.
Folsom Dam is a concrete gravity dam 340 feet high and 1,400 feet long. The main section is flanked by two earthfill wing dams. The right wing dam is 6,700 feet long and 145 high, and the left wing dam is 2,100 feet long and 145 feet high. In addition to the main section and wing dams, there is one auxiliary dam and eight smaller earthfill dikes.
Source:http://www.usbr.gov/dataweb/html/folsom.html
— Submitted February 3, 2009, by Syd Whittle of Mesa, Arizona.
3. The American River
Spanish speaking Native Americans called the Canadian trappers traversing the river "Americanos" and referred to the river as "El Paso de los Americanos".
— Submitted February 17, 2009, by Syd Whittle of Mesa, Arizona. 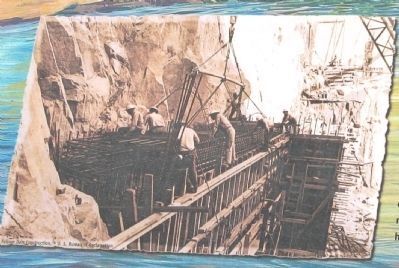 Photographed By Syd Whittle, February 3, 2009
6. Close-Up of Photo on Marker
WATER! once roared through here in the spring as melting snow fed the American River. By late summer the river nearly ran dry. In 1956 the U.S. Bureau of Reclamation built Folsom and Nimbus Dams to stop regional flooding and to provide a year-round supply of water and electricity for California’s farms and cities. Nimbus Hatchery was built to mitigate for the miles of spawning habitat now blocked by the dams. 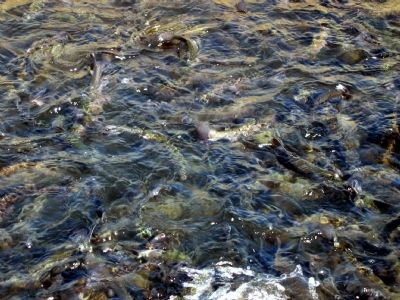 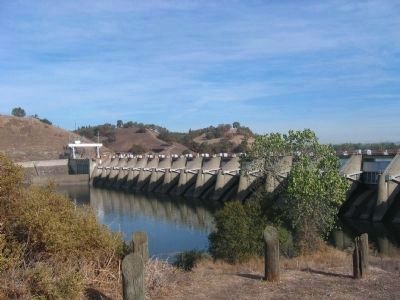 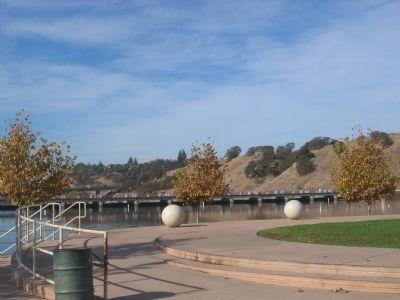 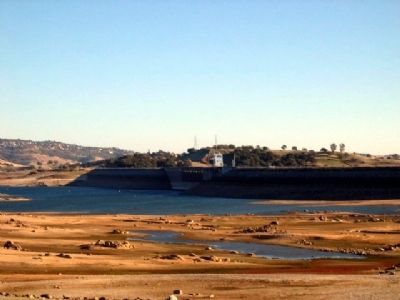 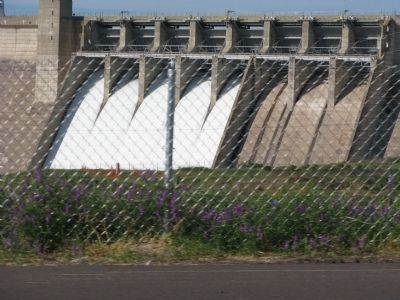