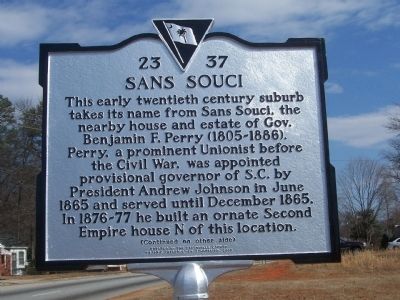 Photographed By M. L., February 8, 2009
1. Sans Souci Marker - Front
Inscription.
Sans Souci. . , (Front): , This early twentieth century suburb takes its name from Sans Souci, the nearby house and estate of Gov. Benjamin F. Perry (1805-1886). Perry, a prominent Unionist before the Civil War, was appointed provisional governor of S.C. by President Andrew Johnson in June 1865 and served until December 1865. In 1876-77 he built an ornate Second Empire house N of this location. , (Reverse): , After B. F. Perry's death in 1886, the house was briefly a girl's school. His heirs sold the property in 1902 and it became the Sans Souci Country Club in 1905. The club moved to Byrd Blvd. and became the Greenville Country Club in 1924. The house burned in 1927. Residential and commercial development in this area from 1911 through World War II featured the name Sans Souci. . This historical marker was erected in 2008 by Greenville County Historic Preservation Commission. It is in Greenville in Greenville County South Carolina

(Front):
This early twentieth century suburb takes its name from Sans Souci, the nearby house and estate of Gov. Benjamin F. Perry (1805-1886). Perry, a prominent Unionist before the Civil War, was appointed provisional governor of S.C. by President Andrew Johnson in June 1865 and served until December 1865. In 1876-77 he built an ornate Second Empire house N of this location.

(Reverse):
After B. F. Perry's death in 1886, the house was briefly a girl's school. His heirs sold the property in 1902 and it became the Sans Souci Country Club in 1905. The club moved to Byrd Blvd. and became the Greenville Country Club in 1924. The house burned in 1927. Residential and commercial development in this area from 1911 through World War II featured the name Sans Souci.

Topics and series. This historical marker is listed in these topic lists: Government & Politics • Notable Buildings 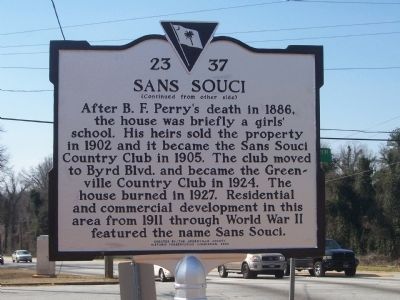 Click or scan to see
this page online
• Notable Places • War, US Civil. In addition, it is included in the Former U.S. Presidents: #17 Andrew Johnson series list. A significant historical month for this entry is June 1865. 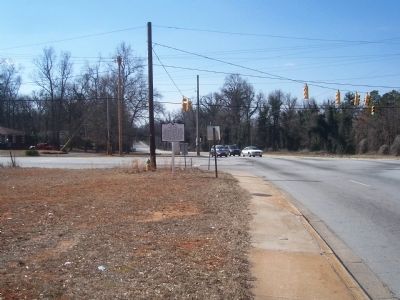 Photographed By M. L., February 8, 2009
3. Sans Souci Marker
Carolina appointed by President Andrew Johnson in 1865 after the end of the American Civil War. (Submitted on February 9, 2009.)

Additional commentary.
1. About Benjamin Franklin Perry
Perry's life was an existence in contradiction. He was a slave owner who favored the Union. He published two newspapers: the Greenville Mountaineer (1829) and the Southern Patriot (1849), a pro-union paper. Perry's rival in the newspaper business was Turner Bynum. Bynum's paper was the Southern Sentinel and he used it to frequently attack Perry and his views. The two finally met in a duel with Bynum loosing his life. While Perry would go on to become governor of South Carolina, he regretted Bynum's death. He was the only South Carolina governor to ever kill a man in a duel.
— Submitted April 13, 2009, by Brian Scott of Anderson, South Carolina.
2. About Sans Souci
The business elite of Greenville, in their growing affluence, did not neglect 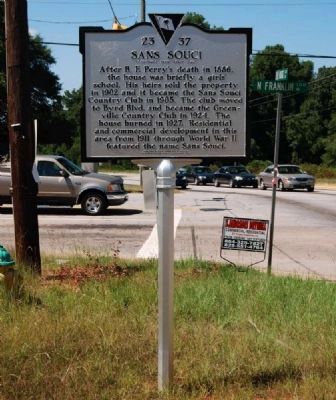 Photographed By Brian Scott, August 29, 2009
4. Sans Souci Marker - Rear
their own social life. In the early months of 1903 there was talk of forming a country club in Greenville, especially when Sans Souci, the former estate of Governor Benjamin F. Perry (for many years a fashionable school for young women), became available for the purpose. In 1905 a group of business leaders, headed by Ellison A. Smyth, purchased the estate and opened it as the Sans Souci Country Club. The French Second Empire house was surrounded by gardens, a nine-hole golf course, and clay tennis courts. The country club remained at Sans Souci until 1923, when it moved to its present location on Byrd Boulevard. (Source: Greenville: The History of the City and County in South Carolina by Archie Vernon Huff (1995), pg 275.)
— Submitted September 12, 2009, by Brian Scott of Anderson, South Carolina.
3. More About Benjamin F. Perry
Perry, Benjamin Franklin, provisional governor of South Carolina (1865), was born in Pickens county, S.C., Nov. 20, 1805, of English ancestry. His father and maternal grandfather were both revolutionary soldiers. He worked on his father's farm and attended school alternately until at the age of sixteen he was sent to a school at Asheville, N.C. He learned the Latin grammar in one week, and prepared to enter South Carolina College. He read law 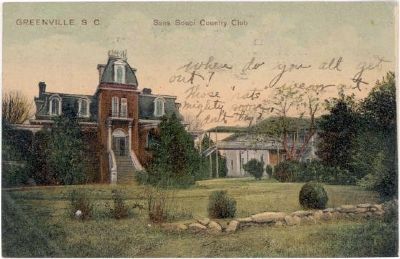 Greenville County Library, Historic Postcard Collection, 1907
5. Sans Souci Country Club
in Greenville and Columbia, was admitted to the bar in Columbia, and began practice in Greenville in 1827. Early displaying an inclination for politics. he was a delegate to the Union convention in 1832, and in the same year became the editor of the "Mountaineer." a Union paper. He was elected a delegate in 1832 to a convention called to nullify the tariff acts of congress, and in 1833 to a convention called for the purpose of considering the promise made by Clay and Calhoun. In 1834, he was the Union candidate for congress in the congressional district of Mr. Calhoun, whose influence was used against him; he was defeated by a majority of sixty votes only in 7,000 by his popular opponent, Warren R. Davis. He was elected state representative in 1830, and served as such until he was elected state senator in 1844, In 1845, he was made a trustee of South Carolina College and was continuously re-elected up to the time of the war. He was defeated for congress in 1846 by the Whig vote and Mr. Calhoun's influence. In 1848, he was a Cass presidential elector-at-large; in 1850, editor of the "Southern Patriot," the only Union paper in the state; delegate to the state convention of 1852, and delegate to the historic national Democratic convention at Charleston in 186О. On account of his Unionism, he was defeated for the state secession convention in 1860. but to make amends the people 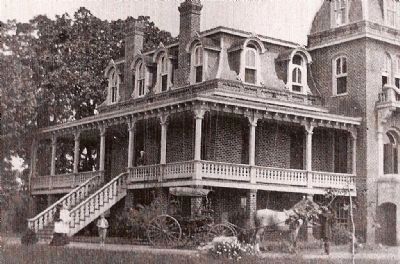 Special Collections, South Carolina Library, USC Columbia
6. Sans Souci
immediately elected him to the legislature, without Ilia leaving his office to electioneer. In the famous Charleston convention he boldly declared his Union views amid a storm of hisses. When his state acted he loyally joined her, good naturedly saying "she was going to the devil and he would go with her," and gave true support to the South. In the fury of a turbulence rarely equalled, he held the respect of all parties. He was made a Confederate commissioner in 1862. Confederate States district attorney in 1863, and Confederate States district judge in 1864. After the war, in 1865, he was appointed by Ргез. Johnson provisional governor of South Carolina; was elected U.S. senator in 1866, but was denied his seat by congress; was delegate to the Philadelphia peace convention in 1866; delegate to the Seymour rational Democratic convention. New York, in 1868, and to the Tilden convention, St. Louis, in 1876. He advocated the Louisville & Cincinnati railroad, was the father of the Greenville & Columbia railroad, and without fee secured legally to Greenville the Baptist Female College. As a legislator life abolished the parish system, making the basis of representation equal in the upper and lower chamber, and gave the election of president and governor to the people. He established the penitentiary, selected the site for the state capitol at Columbia, S.C, untied 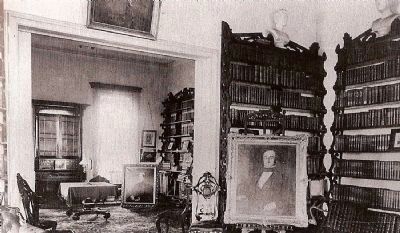 Special Collections, South Carolina Library, USC Columbia, 1871
7. Sans Souci Library
Gov. Perry was an avid reader and collector of books. The painting in the foreground is of Perry at age 48. The rear is his daughter, Mrs. William Beattie.
the law and equity courts, and divorced the banks from the state. He was the author of Reminiscences of Public Men (1883), and left in manuscript several sketches of American statesmen, which his wife has edited, enlarged, and published under the title, Sketches of Eminent American Statesmen, with Speeches and Letters from Gov. Perry, Prefaced by an Outline of the Author's Life, with an introduction by Wade Hampton (1887). He was married in 1837, to Elizabeth Frances McCall, niece of Robert Y. Hayne, governor and U.S. senator. They had nine children; four survive him, Mrs. William Beattie. Hon. William H. Perry, Dr. H.M. Perry, and Benjamin F. Perry. He died at his home "Sans Souci" Greenville, S.C., Dec. 3. 1886. (Source: The National Cyclopaedia of American Biography, pgs 174-175.)
— Submitted September 12, 2009, by Brian Scott of Anderson, South Carolina.
4. About Ellison Adger Smyth
SMYTH, ELLISON ADGER, son of Thomas Smyth, D. D., and Margaret Milligan (Adger) Smyth, was born in Charleston, South Carolina, October 26, 1847. Thomas Smyth was characterized by indomitable will and energy. He was the pastor of the Second Presbyterian church of Charleston for over forty years, and author of over thirty books. 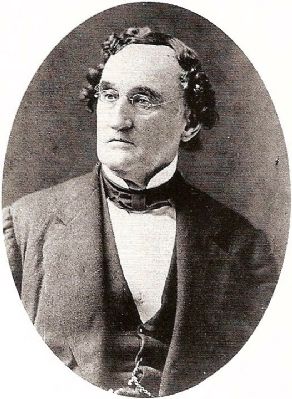 Special Collections, South Carolina Library, USC Columbia, April 13, 2009
8. Gov. Benjamin Franklin Perry
(1805-1886)
South Carolina House of Representatives
1836-1842, 1849-1860, 1862-1864
South Carolina Senate 1844-1849
Confederate District Judge 1864-1865
Governor of South Carolina
June 30, 1865 - November 29, 1865
was his great great grandfather, William Ellison, who came to America from County Antrim, Ireland, in 1741. The great-grandfather of the subject of this sketch, Robert Ellison, was a major in the Continental army, and was later state senator, and one of the founders of Mount Zion society, established in aid of education in the state. James Adger, the grandfather of Ellison A. Smyth, was a merchant and banker of Charleston, South Carolina.

Young Smyth's early life was passed in Charleston. He studied in Professor Sachtleben's classical school in that city, and later became a cadet in South Carolina Military academy; he was also a cadet at the close of the War between the States.

In 1896, Mr. Smyth was appointed by President McKinley to the United States Industrial commission, in which position he continued two years. He was also captain of the Washington Artillery Rifle club, of Charleston, from 1875 to 1879; vice- president of the Carolina Rifle club, of Charleston, in 1870-1875, and captain of the Greenville guards from 1888-1892. During the year 1864-65, Mr. Smyth served in the Third regiment of the South Carolina state militia.

On February 17, 1869, Mr. Smyth married Miss Julia Gambrill. They have had twelve children, five of whom are living in 1908.