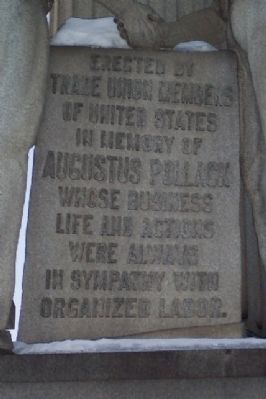 Erected by Trade Union Members of United States in memory of Augustus Pollack whose business life and actions were always in sympathy with organized labor.

Location. 40° 4.36′ N, 80° 43.521′ W. Marker is in Wheeling, West Virginia, in Ohio County. Marker is at the intersection of Interstate 70 and Main Street (State Route 2), on the right when traveling west on Interstate 70. Marker is near the Main Street on-ramp to I-70 westbound, about 200 feet east of the Ohio River. Touch for map. Marker is in this post office area: Wheeling WV 26003, United States of America. Touch for directions. 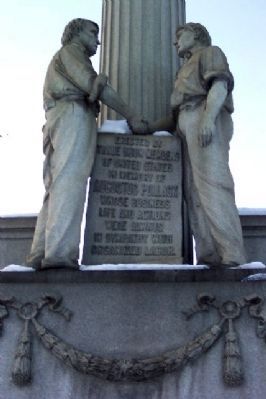 Regarding Augustus Pollack. The monument commemorates Augustus Pollack. Born in Germany in 1830, Pollack immigrated to Baltimore in 1849, and moved to West Virginia in 1854. After the Civil War, he founded the Cigar and Tobacco Factory and the Crown Stogie Company in East Wheeling. Pollack was one of the city's leading businessmen and civic leaders, and was especially active in affairs of the communities' large German speaking population. He was known as a model employer and was a friend of organized labor, often called upon to settle disputes. In his will, he bequested scholarship funds to support a student from the "industrial" population. He died in April 1906. 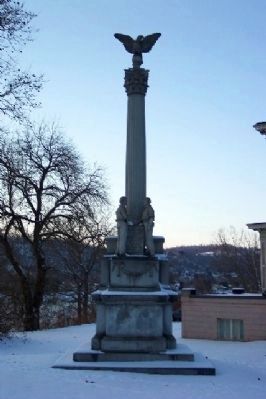 By William Fischer, Jr., January 31, 2009
3. Augustus Pollack Memorial (looking northwest)
The memorial was sculpted by Sigvald Asbjornsen, designed by Fred F. Faris, and erected by the Edward C. Kreutzer firm. Dedicated May 28, 1916, it was relocated to its present site in 1956. 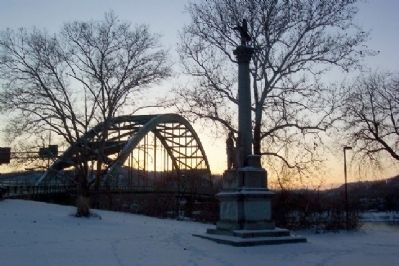