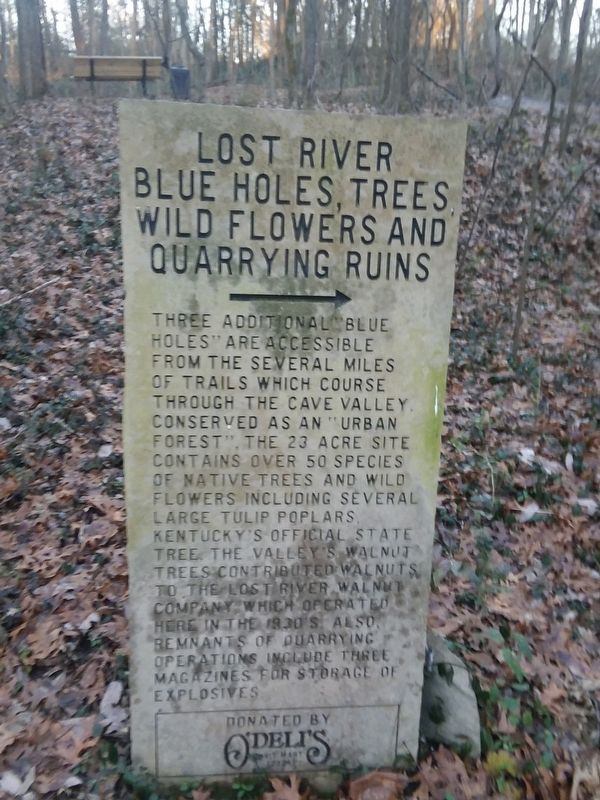 Three additional blue holes are accessible from the several miles of trails which course through the cave valley. Conserved as an "urban forest", the 23 acre site contains over 50 species of native trees and wild flowers including several large Tulip Poplars, Kentucky's official state tree. The valley's walnut trees contributed walnuts to the Lost River Walnut Company which operated here in the 1830s. Also, remnants of quarrying operations include three magazines for storage of explosives.

Other nearby markers. At least 8 other markers are within 2 miles of this marker, measured as the crow flies. Civil War Camps (within shouting distance of this marker); Lost River Cave & Valley (within shouting distance of this marker); Protecting A Natural Treasure (about 300 feet away, measured in a direct line); Lost River Cave and Valley (about 700 feet away); Morgan's Command Organized (about 800 feet away); Tourist Court (approx. 0.2 miles away); William Taylor Runner Roadside Park (approx. 0.4 miles away); Jonesville (approx. 2.1 miles away). Touch for a list and map of all markers in Bowling Green.
Credits. This page was last revised on December 14, 2020. It was originally submitted on December 13, 2020, by TeamOHE of Wauseon, Ohio. This page has been viewed 48 times since then and 6 times this year. Photo   1. submitted on December 13, 2020, by TeamOHE of Wauseon, Ohio. • Devry Becker Jones was the editor who published this page.
Share This Page.