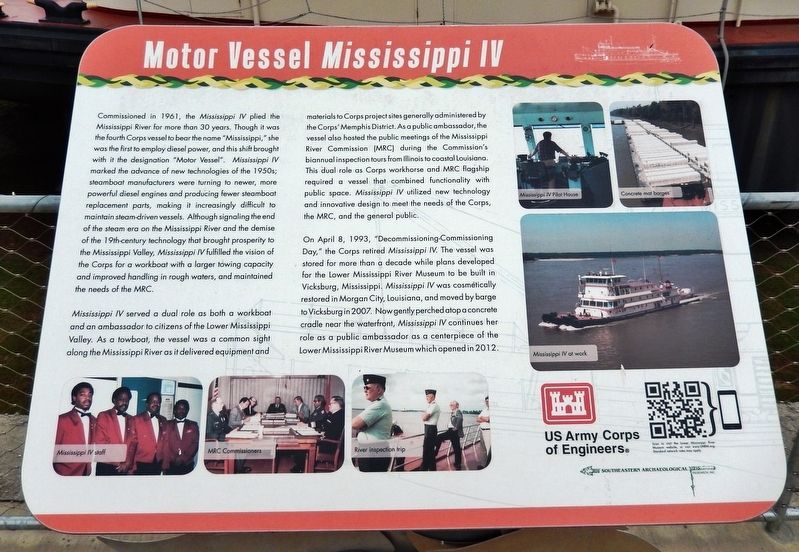 Commissioned in 1961, the Mississippi IV plied the Mississippi River for more than 30 years. Though it was the fourth Corps vessel to bear the name "Mississippi," she was the first to employ diesel power, and this shift brought with it the designation "Motor Vessel". Mississippi IV marked the advance of new technologies of the 1950s; steamboat manufacturers were turning to newer, more powerful diesel engines and producing fewer steamboat replacement parts, making it increasingly difficult to maintain steam-driven vessels. Although signaling the end of the steam era on the Mississippi River and the demise of the 19th-century technology that brought prosperity to the Mississippi Valley, Mississippi IV fulfilled the vision of the Corps for a workboat with a larger towing capacity and improved handling in rough waters, and maintained the needs of the MRC.

Mississippi IV served a dual role as both a workboat and an ambassador to citizens of the Lower Mississippi Valley. As a towboat, the vessel was a common sight along the Mississippi River as it delivered equipment and materials to Corps project sites generally 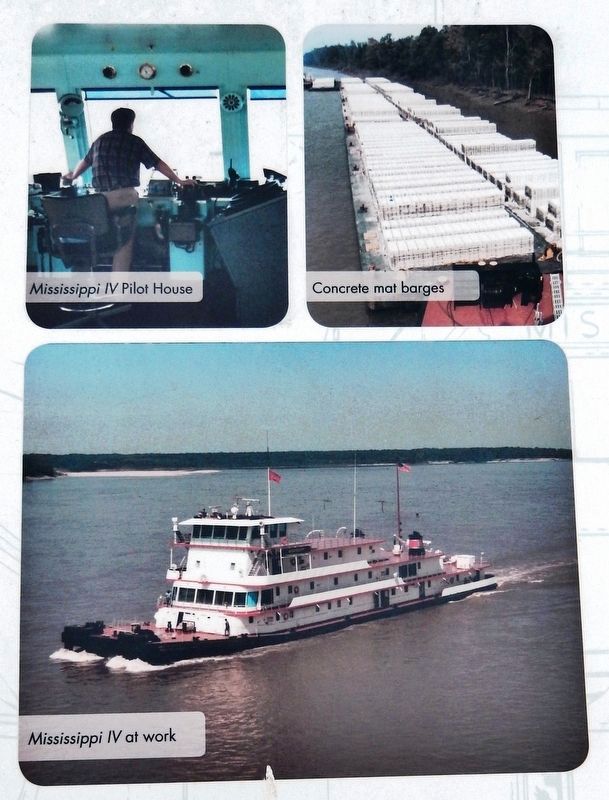 2. Marker detail: Mississippi IV Pilot House, Concrete mat barges, and Mississippi IV
administered by the Corps' Memphis District. As a public ambassador, the vessel also hosted the public meetings of the Mississippi River Commission (MRC) during the Commission's biannual inspection tours from Illinois to coastal Louisiana. This dual role as Corps workhorse and MRC flagship required a vessel that combined functionality with public space. Mississippi IV utilized new technology and innovative design to meet the needs of the Corps, the MRC, and the general public.

Related markers. Click here for a list of markers that are related to this marker. Mississippi River Commission

Also see . . .  Motor Vessel Mississippi IV. US Army Corps of Engineers, Vicksburg District Website entry:
On September 26, 2007 it was moved to its permanent location on land at the Lower Mississippi River Museum in Vicksburg, Mississippi. (Submitted on December 22, 2020, by Cosmos Mariner of Cape Canaveral, Florida.) 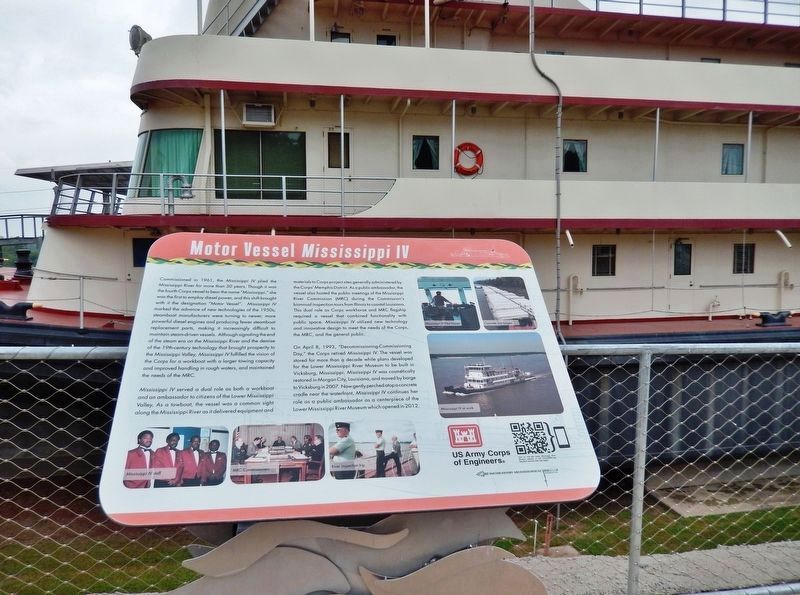 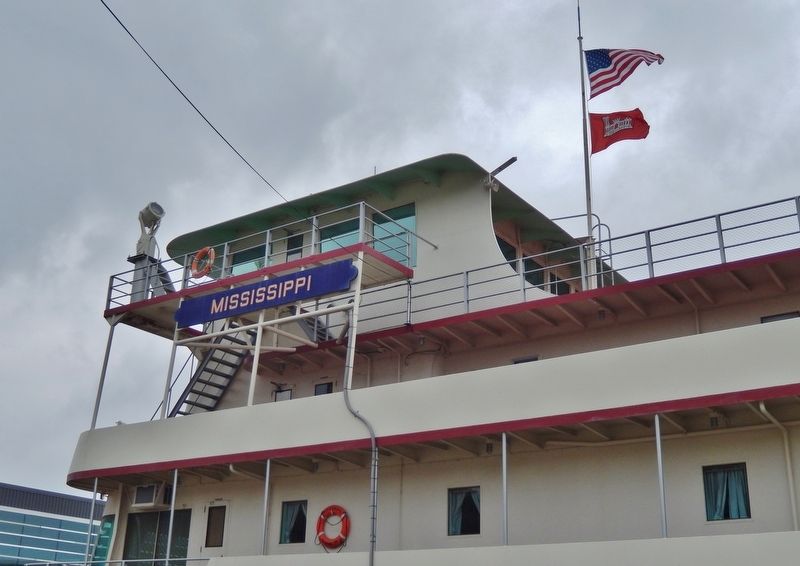 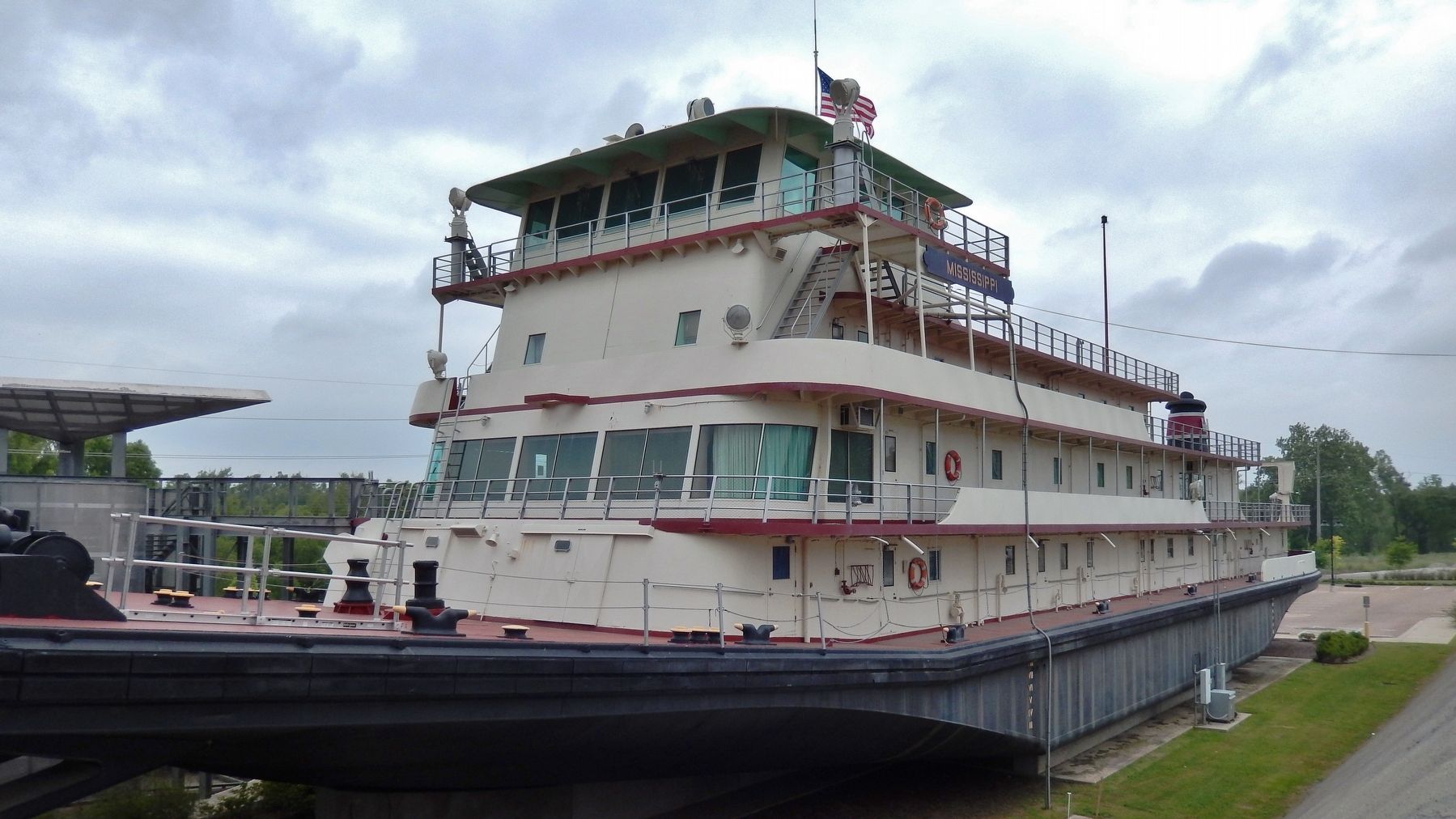