Site of the First Memorial Service in Illinois 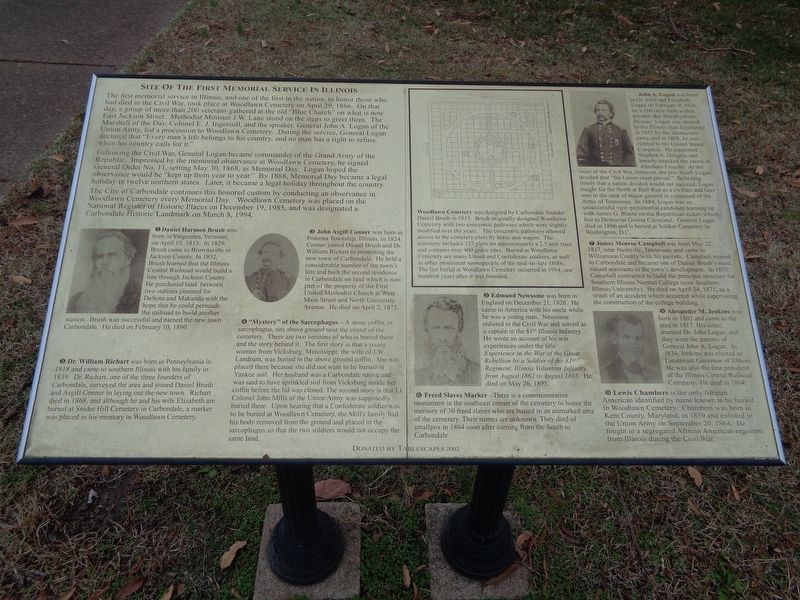 The first memorial service in Illinois, and one of the first in the nation, to honor those who had died in the Civil War, took place at Woodlawn Cemetery on April 29, 1866. On that day, a group of more than 200 veterans gathered at the old "Blue Church" on what is now East Jackson Street. Methodist Minister J.W. Lane stood on the steps to greet them. The Marshall of the Day, Colonel E.J. Ingersoll, and the speaker, General John A. Logan of the Union Army, led a procession to Woodlawn Cemetery. During the service, General Logan declared that "Every man's life belongs to his country, and no man has a right to refuse when his country calls for it."

Following the Civil War, General Logan became commander of the Grand Army of the Republic. Impressed by the memorial observance at Woodlawn Cemetery, he signed General Order No. 11, setting May 30, 1868, as Memorial Day. Logan hoped the observance would be "kept up from year to year." By 1888, Memorial Day became a legal holiday in twelve northern states. Later, it became a legal holiday throughout the country.

The City of Carbondale continues this honored custom by conducting an 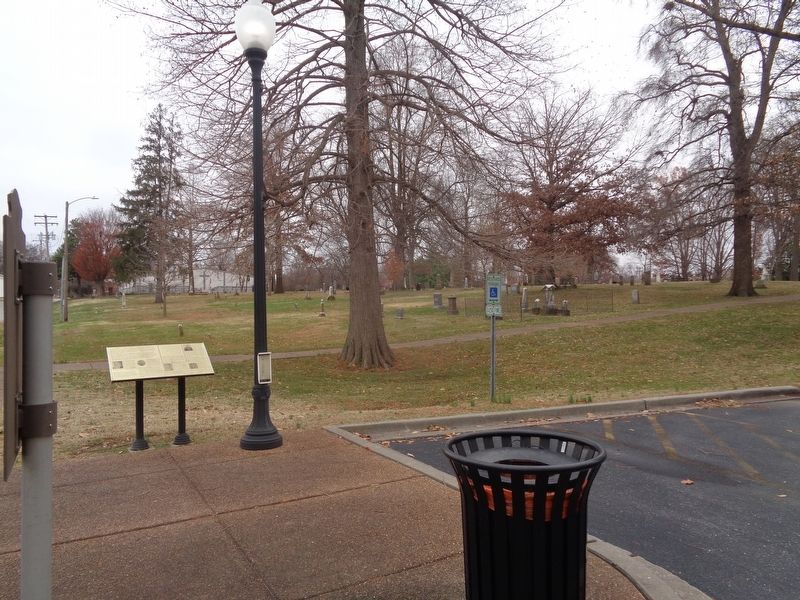 By Jason Voigt, November 26, 2020
2. Site of the First Memorial Service in Illinois Marker
Marker is located at the Woodlawn Cemetery parking lot (southwest corner)
observance in Woodlawn Cemetery every Memorial Day. Woodlawn Cemetery was placed on the National Register of Historic Places on December 19, 1985, and was designated a Carbondale Historic Landmark on March 8, 1994.

1) Daniel Harmon Brush was born in Vergennes, Vermont, on April 15, 1813. In 1829, Brush came to Brownsville in Jackson County. In 1852, Brush learned that the Illinois Central Railroad would build a line through Jackson County. He purchased land between two stations planned for DeSoto and Makanda with the hope that he could persuade the railroad to build another station. Brush was successful and named the new town Carbondale. He died on February 10, 1890.

2) Dr. William Richart was born in Pennsylvania in 1818 and came to southern Illinois with his family in 1839. Dr. Richart, one of the three founders of Carbondale, surveyed the area and joined Daniel Brush and Asgill Conner in laying out the new town. Richart died in 1868, and although he and his wife Elizabeth are buried at Snider Hill Cemetery in Carbondale, a marker was placed in his memory in Woodlawn Cemetery.

3) John Asgill Conner was born in Pomona Township, Illinois, in 1824. Conner joined Daniel Brush and Dr. William Richart in promoting the new town of Carbondale. He held a considerable number of the town's lots and built the second residence in Carbondale on land which is now part of the property of the First United Methodist Church at West Main Street and North University Avenue. He died on April 2, 1875.

4) "Mystery" of the Sarcophagus - A stone coffin, or sarcophagus, sits above ground near the center of the cemetery. There are two versions of who is buried there and the story behind it. The first story is that a young woman from Vicksburg, Mississippi, the wife of J.W. Landrum, was buried in the above ground coffin. She was placed there because she did not want to be buried in Yankee soil. Her husband was a Carbondale native and was said to have sprinkled soil from Vicksburg inside her coffin before the lid was closed. The second story is that Lt. Colonel John Mills of the Union Army was supposedly buried there. Upon hearing that a Confederate soldier was to be buried at Woodlawn Cemetery, the Mill's family had his body removed from the ground and placed in the sarcophagus so that the two soldiers would not occupy the same land.

5) Edmund Newsome was born in England on December 21, 1826. He came to America with his uncle while he was a young man. Newsome enlisted in the Civil War and served as a captain in the 81st Illinois Infantry. He wrote an account of his war experiences under the title: Experience in the War of the Great Rebellion by a Soldier of the 81st Regiment, Illinois Volunteer Infantry, from August 1862 to August 1865. He died on May 26, 1895.

6) Freed Slaves Marker - There is a commemorative monument in the southeast corner of the cemetery to honor the memory of 30 freed slaves who are buried in an unmarked area of the cemetery. Their names are unknown. They died of smallpox in 1864 soon after coming from the South to Carbondale.

John A. Logan was born to Dr. John and Elizabeth Logan on February 9, 1826, on a 160-acre farm within present-day Murphysboro, Illinois. Logan was elected to the Illinois state legislature in 1852 by the Democratic party, and in 1858, he was elected to the United States Congress. He supported Stephen A. Douglas and bitterly attacked the views of Abraham Lincoln. At the onset of the Civil War, however, the pro-South Logan decided that "the Union must prevail." Believing firmly that a nation divided would not succeed, Logan fought for the North at Bull Run as a civilian and later rose to the rank of major general in command of the Army of Tennessee. In 1884, Logan was an unsuccessful vice-presidential candidate teaming up with James G. Blaine on the Republican ticket, which lost to Democrat Grover Cleveland. General Logan died in 1886 and is buried at Soldier Cemetery in Washington, D.C.

7) James Monroe Campbell was born May 22, 1817, near Nashville, Tennessee, and came to Williamson County with his parents. Campbell moved to Carbondale and became one of Daniel Brush's most valued assistants in the town's development. In 1870, Campbell contracted to build the principal structure for Southern Illinois Normal College (now Southern Illinois University). He died on April 24, 1871, as a result of an accident which occurred while supervising the construction of the college building.

8) Alexander M. Jenkins was born in 1802 and came to the area in 1817. His sister, married Dr. John Logan, and they were the parents of General John A. Logan. In 1834, Jenkins was elected as Lieutenant Governor of Illinois. He was also the first president of the Illinois Central Railroad Company. He died in 1864.

9) Lewis Chambers is the only African American identified by name known to be buried in Woodlawn Cemetery. Chambers was born in Kent County, Maryland, in 1839 and enlisted in the Union Army on September 20, 1864. He fought in a segregated African American regiment from Illinois during the Civil War.

Location. 37° 43.599′ N, 89° 12.673′ W. Marker is in Carbondale, Illinois, in Jackson County. Marker is on South Logan Avenue south of East Main Street (Illinois Route 13), on the right when traveling north. Marker is located at the southwest corner of Woodlawn Cemetery. Touch for map. Marker is at or near this postal address: 202 S Logan Ave, Carbondale IL 62901, United States of America. Touch for directions.