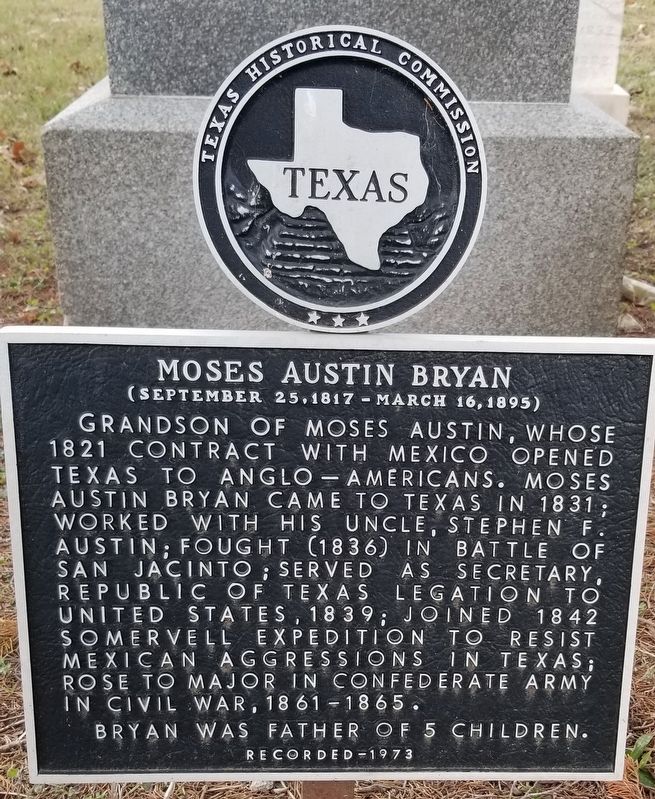 Grandson of Moses Austin, whose 1821 contract with Mexico opened Texas to Anglo-Americans. Moses Austin Bryan came to Texas in 1831; worked with his uncle, Stephen F. Austin; fought (1836) in Battle of San Jacinto; served as secretary, Republic of Texas Legation to United States, 1839; joined 1842 Somervell Expedition to resist Mexican aggressions in Texas; rose to major in Confederate Army in Civil War, 1861-1865. Bryan was father of 5 children.
Recorded 1973

Location. 30° 19.706′ N, 96° 21.686′ W. Marker is near Independence, Texas, in Washington County. Marker can be reached from Coles Road (County Highway 60) 0.1 miles west of McCrocklin Road. The marker is located in the southwest section of the Old Independence Cemetery. Touch for map. Marker is in this post office area: Brenham TX 77833, United States of America. Touch for directions.

Also see . . .  Moses Austin Bryan (1817–1895). Bryan joined as a private. He served in the battle of San Jacinto as third sergeant in Moseley Baker's company, as aide-de-camp on the staff of Thomas J. Rusk, and as interpreter for the conference between Sam Houston and Antonio López de Santa Anna.  Source: The Handbook of Texas (Submitted on January 13, 2021, by James Hulse of Medina, Texas.)