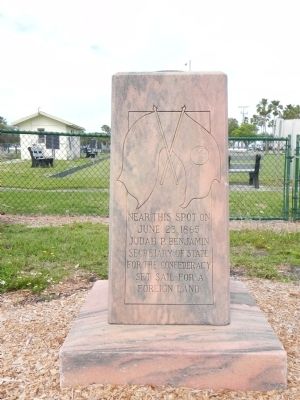 Near this spot on June 23, 1865 Judah P. Benjamin Secretary of State for the Confederacy set sail for a foreign land

Erected 1942 by United Daughters of the Confederacy.

Topics and series. This historical marker monument is listed in these topic lists: War, US Civil • Waterways & Vessels. In addition, it is included in the United Daughters of the Confederacy series list. 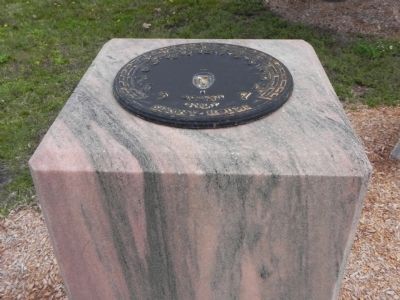 More about this monument. In the early 1940s, the United Daughters of the Confederacy led an effort to erect a marker in Sarasota to commemorate Benjamin's escape. On January 22, 1942, the new marker was unveiled with great pomp and circumstance, including a parade, patriotic music, a luncheon at the John Ringling Hotel, and a program at the Municipal Auditorium. Florida Governor Spessard L. Holland, Congressman J. Hardin Peterson, and Sarasota Mayor E.A. Smith delivered remarks.

Regarding Judah P. Benjamin Monument. Judah P. Benjamin, a former U.S. Senator from Louisiana, served as the Confederate Attorney General, Secretary of War, and Secretary of State. When Richmond fell in April 1865, he fled to the Deep South with President Jefferson Davis and the Confederate Cabinet. Benjamin left Davis in Georgia and headed to Florida, where he intended to slip out of the country. Fearing arrest for treason, Benjamin disguised himself as a farmer looking to purchase land in Florida. Confederate sympathizers assisted Benjamin as he made his way through the state. One stay included the Gamble Mansion in Ellenton. Finally, Benjamin arranged for Capt. Frederick Tresca to take him to the Bahamas aboard a sixteen-foot sloop. Tresca hid the small boat in Whitaker Bayou in Sarasota. Meanwhile, the former Confederate Secretary of State was smuggled to farmer William 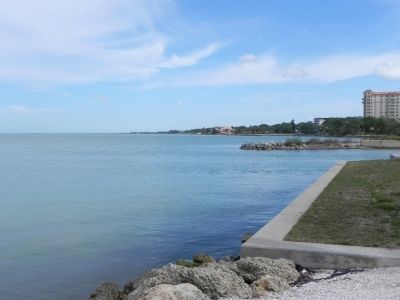 By Ronald J. Baumgarten, Jr., April 9, 2013
3. View of Yellow Bluffs and Sarasota Bay near monument
Benjamin escaped by way of these waters in June 1865.
H. Whitaker's home in a wagon filled with fresh beef. On June 23, 1865, Benjamin finally set sail with Tresca and reached Bimini on July 10. Benjamin eventually traveled to England, where he rose to prominence as a barrister. 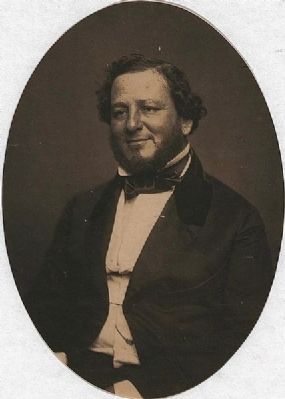