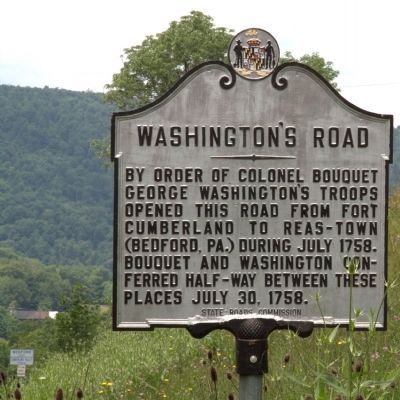 By order of Colonel Bouquet, George Washington’s troops opened this road from Fort Cumberland to Reas-town (Bedford, Pa.) during July 1758. Bouquet and Washington conferred half-way between these places July 30, 1758.

Topics and series. This historical marker is listed in these topic lists: Colonial Era • Roads & Vehicles • War, French and Indian. In addition, it is included in the Former U.S. Presidents: #01 George Washington, and the Maryland Historical Trust series lists. A significant historical month for this entry is July 1758. 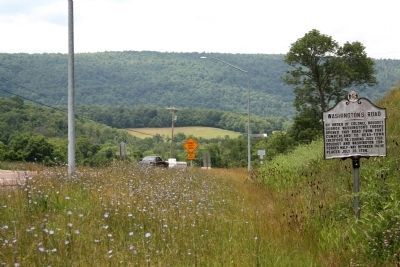 Photographed By J. J. Prats, June 26, 2011
2. Washington’s Road Marker
This view is north. Pennsylvania is in the distance. 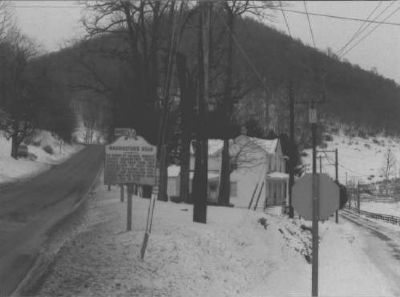 William J. Pratt - Maryland Historical Trust (Historic Sites Survey), January 17, 1978
3. Washington's Road Marker
View is from the south, looking north. This marker has surely been moved since this photograph was taken, due to the widening of the road. The road that goes off to the right was Pine Ridge Road. The road on which it was first erected appears to have been renamed Granet Road, which now dead-ends before reaching US 220.
Credits. This page was last revised on February 16, 2021. It was originally submitted on March 10, 2008, by Christopher Busta-Peck of Shaker Heights, Ohio. This page has been viewed 1,740 times since then and 31 times this year. Last updated on February 14, 2021, by Carl Gordon Moore Jr. of North East, Maryland. Photos:   1, 2. submitted on August 28, 2011, by J. J. Prats of Powell, Ohio.   3. submitted on March 10, 2008, by Christopher Busta-Peck of Shaker Heights, Ohio. • Bill Pfingsten was the editor who published this page.
Share this page.