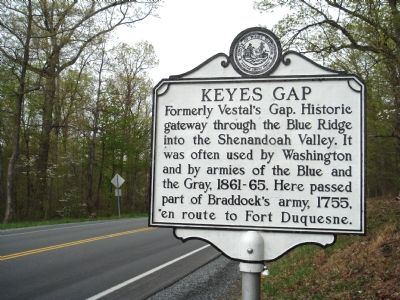 By J. J. Prats, April 28, 2007
1. Keyes Gap Marker
Inscription.
Keyes Gap. . Formerly Vestal’s Gap. Historic gateway through the Blue Ridge into the Shenandoah Valley. It was often used by Washington and by armies of the Blue and Gray, 1861–65. Here passed part of Braddock’s army, 1755, en route to Fort Duquesne. . This historical marker was erected by West Virginia Department of Archives and History. It is Near Mountain Mission in Jefferson County West Virginia

Formerly Vestal’s Gap. Historic gateway through the Blue Ridge into the Shenandoah Valley. It was often used by Washington and by armies of the Blue and Gray, 1861–65. Here passed part of Braddock’s army, 1755, en route to Fort Duquesne.

Erected by West Virginia Department of Archives and History.

Topics and series. This historical marker is listed in these topic lists: Natural Features • War, French and Indian • War, US Civil. In addition, it is included in the Braddock’s Road and Maj. Gen. Edward Braddock, and the West Virginia Archives and History series lists. 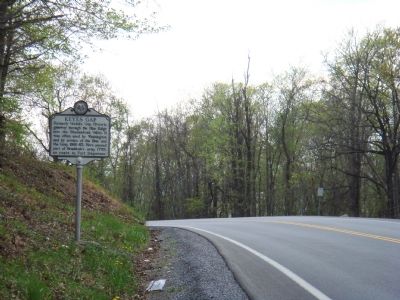 Regarding Keyes Gap. The Shenandoah River runs just beyond Keys Gap to join the Potomac River seven miles north at Harpers Ferry, a strategic asset for both the North and South during the Civil War. En route to Fort Duquesne (now Pittsburgh, Pennsylvania) from Alexandria, Virginia, to fight the French and the Indians, British General Edward Braddock’s army, which included the young Colonel George Washington, split into two columns. One traveled through Virginia and this gap while the other traveled through Maryland. They met at Fort Federick, half-way between Hagerstown and Hancock in Maryland and continued from there to their rout at the Monongahela River, just short of Fort Duquesne. Throughout his life, George Washington traveled on horseback to Berkley Springs and points west to visit property he owned and to survey routes to the midwest.

Related markers. Click here for a list of markers that are related to this marker. Markers related to Vestal's Gap Road.

Additional comments.
1. Keyes Gap marker
Sometime in 2010 (maybe earlier) this marker could no longer be found along Route 9 near the VA/WV line. It may have been hit by a car and destroyed since there is evidence of a damaged post, but no sign.
— Submitted April 24, 2011, by Christopher B Straight of Leesburg, Virginia.
Credits. This page was last revised on February 21, 2021. It was originally submitted on April 29, 2007, by J. J. Prats of Powell, Ohio. This page has been viewed 2,507 times since then and 12 times this year. Last updated on February 19, 2021, by Carl Gordon Moore Jr. of North East, Maryland. Photos:   1, 2. submitted on May 1, 2007, by J. J. Prats of Powell, Ohio. • J. Makali Bruton was the editor who published this page.
Share This Page.