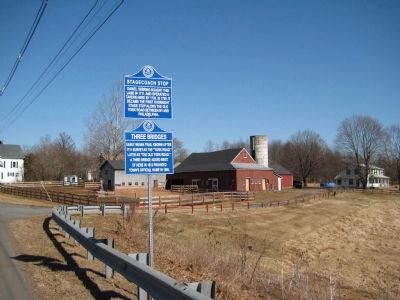 Early Indian trail known after 1711 survey as “The York Road,” later as “The Old York Road.” A third bridge added west of here in 1813 provided town’s official name in 1866.

Topics and series. This historical marker is listed in these topic lists: Colonial Era • Roads & Vehicles • Settlements & Settlers. In addition, it is included in the New Jersey, Hunterdon County Cultural and Heritage Commission series list. A significant historical year for this entry is 1711.

Other nearby markers. At least 8 other markers are within 2 miles of this marker, measured as the crow flies. Stagecoach Stop (here, next to this marker); South Branch Of The Central R.R. (about 400 feet away, measured in a direct line); The Province Line (approx. ¼ mile away); Van Fleet's Corner School (approx.