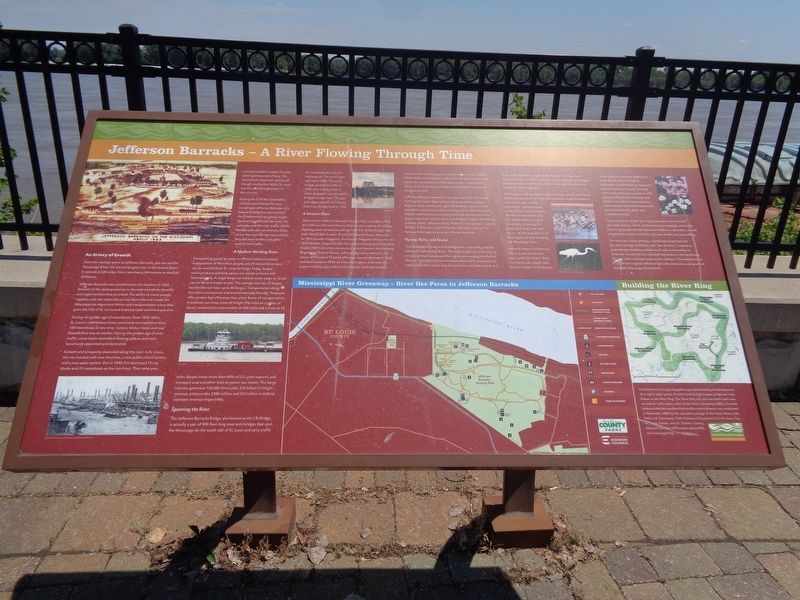 An Artery of Growth

From this vantage point at Jefferson Barracks, you can see the Mississippi River, the second longest river in the United States. It extends 2,320 miles, from Lake Itasca, Minnesota to the Gulf of Mexico.

Jefferson Barracks was established at this location in 1826 because of the close proximity to the river and all the benefits and opportunities that provided. The ability to move people, supplies, and raw materials up and down the river made the Mississippi an important lifeline and transportation artery that grew the City of St. Louis and helped propel western expansion.

During the golden age of steamboats, from 1830-1850, St. Louis's cobblestone levee commonly received more than 150 steamboats at one time. Cotton, timber, food, and coal floated their way to market. During this golden age of river traffic, some boats resembled floating palaces and were luxuriously appointed and decorated.

Growth and prosperity abounded along the river. In St. Louis, the city bustled with new churches, a new public school system, and a new water system. But in 1849, fire destroyed 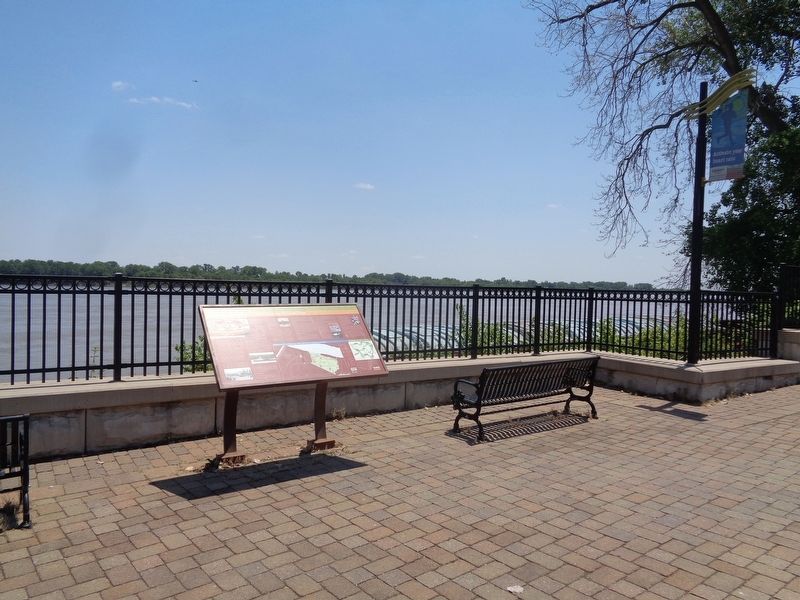 Click or scan to see
this page online
15 city blocks and 23 steamboats at the riverfront. That same year, a cholera epidemic swept the area, claiming thousands of lives. The momentum of growth continued though, and by the 1850's, St. Louis was the second largest port in the country.

During the Civil War, blockades were set up all along the river, including at Jefferson Barracks. U.S. Federal Intelligence learned that the Confederates sought to target the Arsenal, Jefferson Barracks, the railroads, and the river traffic. While the Barracks did not extend a chain across the river like the one at Cairo, they did have artillery set up to control river traffic.

Transporting goods by water is efficient and economical. A population of 90 million people and 29 industrial centers can be reached from St. Louis by barge. Today, barges move products and help power our nation at home and internationally. A single barge can hold as much cargo as 15 rail cars or 60 semi trailer trucks. The average tow has 15 barges, but flotillas can have up to 40 barges. Transportation along the river is economical and environmentally friendly. Towboats offer greater fuel efficiency than other forms of transportation. A towboat can move a ton of freight 516 miles on a gallon of diesel, compared to a locomotive at 200 miles and a truck at 59 miles. Barges move more than 60% of U.S. grain exports, and transport coal and other fuels to power our nation. The barge industry generates 124,000 direct jobs, $10 billion in freight revenue, and provides $300 million and $55 million in federal and state revenue respectively.

The Jefferson Barracks Bridge, also known as the J.B. Bridge, is actually a pair of 909-foot-long steel arch bridges that span the Mississippi on the south side of St. Louis and carry traffic for Interstate 255 and U.S. Highway 50. The north span opened in 1983. The south bridge opened to traffic in 1992 after a delay when a crane dropped a section of the bridge into the river. This pair of bridges replaces the former steel truss bridge built in 1941.

Welcome to Jefferson Barracks Historic Park. Included within the Jefferson Barracks Historic District are a variety of military buildings and related sites dating from the 1850s through the post-World War II years. The Old Ordnance Room Museum - an 1851 powder magazine, the Powder Magazine Museum - an 1857 Powder magazine, and the Laborers House and Ordnance Stable (1851) are three museums that are listed on the National Register of Historic Places. Jefferson Barracks, named in the honor of President Thomas Jefferson, was established in 1826 and deactivated in 1946. In a few short years, it became the largest military post in the United States. Centrally located, it became the out-fitting and training center for the military effort of the entire western half of the United States. Its vital role in the development of the West made it a significant factor in the economic, political, and diplomatic success of the government.

Jefferson Barracks started out as a base camp for the troops fighting the Indian Wars and served as an ordnance depot, engineer base, cavalry post, general hospital, induction and separation center, and a basic training center. Over the years, the Barracks hosted a constant procession of men who have played important roles in American history. Stephan W. Kearny, Zackary Taylor, Jefferson Davis, Robert E. Lee, Ulysses S. Grant, William T. Sherman, and Phillip Sheridan were a few of the famous Americans to serve at Jefferson Barracks.

The Mississippi Flyway is a bird migration route that generally follows the Mississippi River. The main endpoints of the Flyway include central Canada and the region surrounding the Gulf of Mexico. Typically birds use this route because no mountains or ridges block their entire way. Good sources of water, food, and cover exist the entire length of the Flyway. The majority of North American land birds flying south through the Mississippi Flyway to their winter homes in the tropic take the short cut across the Gulf of Mexico. This route is used by large number of ducks, geese, shorebirds, blackbirds, sparrows, warbler and thrushes. Large bird species that can be seen include wild turkey, Canada goose, mallard duck, various raptors like the turkey vulture and red-tailed hawk, as well as shorebirds, including the great egret and great blue heron. Winter populations of bald eagles are also found by the Mississippi River.

Before European settlement, the area was prairie and open, park-like forest. Trees are mainly oak, maple, and hickory, similar to the forests of the Ozarks. Common understory trees include Eastern redbud, serviceberry, and flowering dogwood. Riparian areas are heavily forested with mainly American sycamore. Old pastures are usually colonized with Eastern red cedar. Invasive species, most notably Japanese Honeysuckle, are common in the parks and actively removed.

Large mammals include growing populations of whitetail deer and coyotes, which are becoming increasingly urbanized. Eastern gray squirrel and cottontail rabbit are abundant, as well as opossum, beaver, muskrat, raccoon, skunk, and groundhog.

The area has a karst geology, a landscape characterized by caves, springs, sinkholes, and "lost streams," created as groundwater dissolves soluble rock such as limestone or dolomite. A sinkhole is a rounded depression in the landscape formed when underground cavities collapse. The limestone for many of the original Jefferson Barracks structures was quarried along the Mississippi River bluffs.

Topics and series. This historical marker is listed in these topic lists: Animals • Industry & Commerce • Parks & Recreational Areas • Waterways & Vessels. In addition, it is included in the National Cemeteries series list.