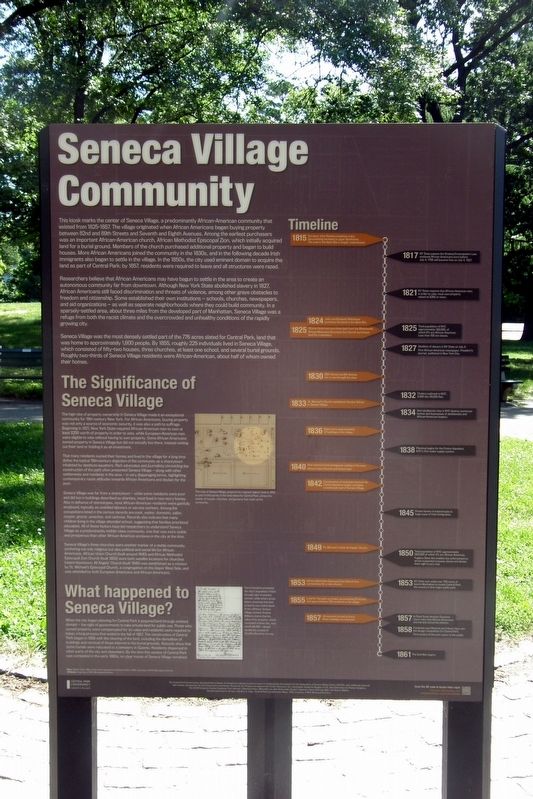 This kiosk marks the center of Seneca Village, a predominantly African-American community the existed from 1825-1857. The village originated when African Americans began buying property between 82nd and 83rd Streets and Seventh and Eighth Avenues. Among the earliest purchasers was an important African-American church, African Methodist Episcopal Zion, which initially acquired land for a burial ground. Members of the church purchased additional property and began to build houses. More African Americans joined the community in the 11830s, and in the following decade Irish immigrants also begam to settle the in village. In the 1850s, the city used eminent domain to acquire the land as part of Central Park; by 1857, residents were required to leave and all structures were razed.

Researchers believe that African Americans may have begun to settle in the area to create as autonomous community far from downtown. Although New York State abolished slavery in 1827, African Americans still faced discrimination and threats of violence, among other grave obstacles to freedom and citizenship. Some established their own institutions – schools, 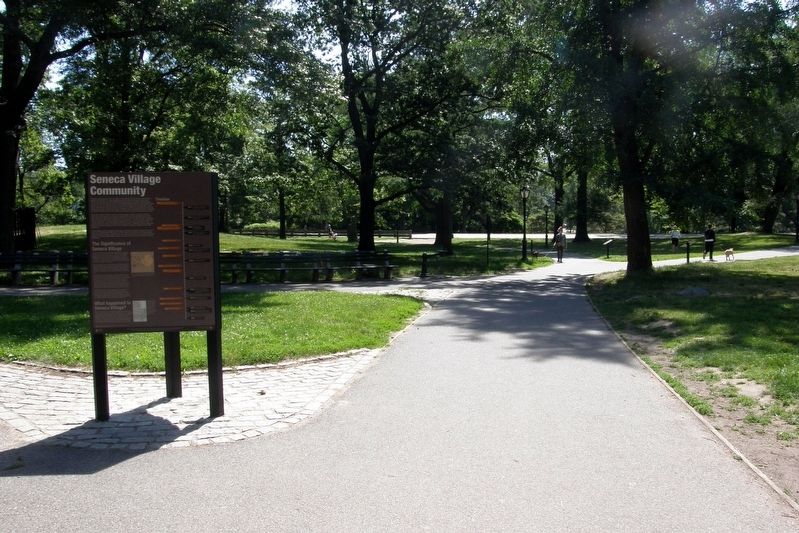 Click or scan to see
this page online
churches, newspapers, and aid organizations – as well as separate neighborhoods where they could build a community. In a sparsely-settled area, about three miles from the developed part of Manhattan, Seneca Valley was a refuge from both the racist climate and the overcrowded and unhealthy conditions of the rapidly growing city.

Seneca Village was the moist densely settled part of the 776 acres slated for Central Park, land that was home to approximately 1,600 people. By 1855, roughly 225 individuals lived in Seneca Village, which consisted of fifty-two houses, three churches, at least one school, and several burial grounds. Roughly two-thirds of Seneca Village residents were African-American, about half of whom owned their homes.

The Significance of Seneca Village
The high rate of property ownership in Seneca Village made it an exceptional community for 19th-century New York. For African Americans, buying property was not only a source of economic security, it was also a path to suffrage. Beginning in 1821, New York State required African-American men to own at least $250 worth of property in order to vote, while European-American men were eligible to vote without having to own property. Some African Americans owned property in Seneca Village but did not actually live there, instead renting out land or holding it as an investment. 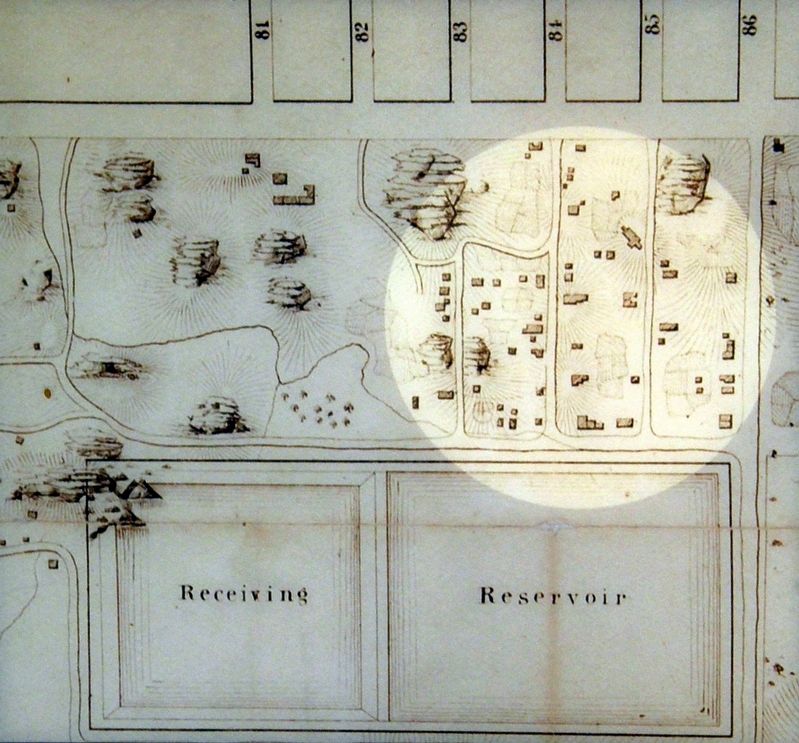 Photographed By Larry Gertner, June 17, 2020
3. Inset
“This map of Seneca Village, prepared by engineer Egbert Viele in 1855 as part of the survey of the land slated for Central Park, shows the cluster of houses, churches, and gardens that made up the community.”
residents owned their homes and lived in the village for a long time defines the typical 19th-century depiction of the community as a shantytown inhabited by destitute squatters. Park advocates and journalists chronicling the construction of the park often presented Seneca Village – along with other settlements and residents of the area – in very disparaging terms, highlighting contemporary racist attitudes towards African Americans and disdain for the poor.

Seneca Village was far from a shantytown – while some residents were poor and did live in buildings described as shanties, most lived in two-story homes. Also in defiance of stereotypes, most African-American residents were gainfully employed, typically as unskilled laborers or service workers. Among the occupations listed in the census records are cook, waiter, domestic, sailor, cooper, grocer, preacher, and cartman. Records also indicate that many children living in the village attended school, suggesting that families prioritized education. All of these factors have led researchers to understand Seneca Village as a predominantly middle-class community, one that was more stable and prosperous than other African-American enclaves in the city at the time.

Seneca Village’s three churches were another marker of a stable community, anchoring not only religious but also political and social life 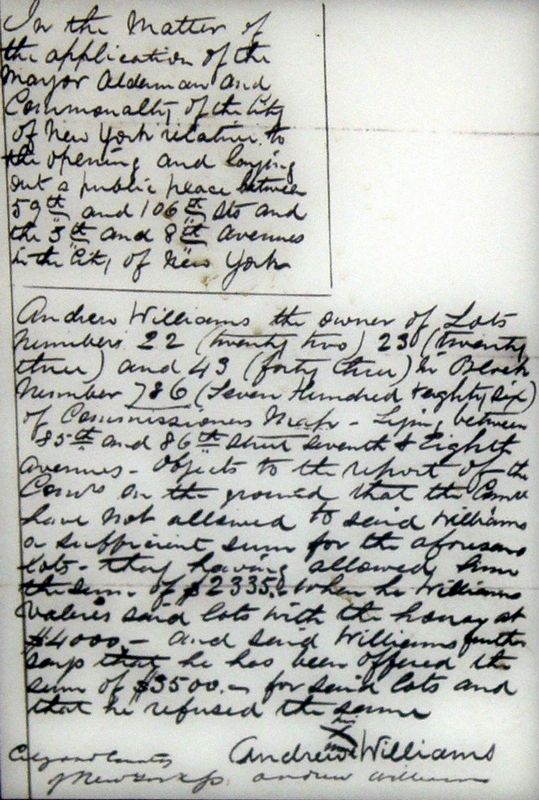 Photographed By Larry Gertner, June 17, 2020
4. Inset
“Some residents protested the city’s acquisition of land through right of eminent domain, while others wrote letters asserting that their property was undervalued. In this affidavit, Seneca Village resident Andrew Williams states that the value of his property, which consisted of three lots, was worth $4,000 – almost double the amount of $2,335 offered by the city.”
for African Americans. African Union Church (built around 1840) and African Methodist Episcopal Zion Church (built 1853) were both satellite locations for churches based downtown. All Angels’ Church (built 1849) was established as a mission by St. Michael’s Episcopal Church, a congregation on the Upper West side, and was attended by both European Americans and African Americans.

What happened to Seneca Village?
When the city began planning for Central Park it acquired land through eminent domain – the right of governments to take private land for public use. Those who owned property were compensated for its value and residents were required to leave, a long process that ended in the fall of 1857. The construction of Central Park began in 1858 with the clearing of the land, including the demolition of buildings and removal of those interred in the burial grounds. Records show that some burials were relocated to a cemetery in Queens. Residents dispersed to other parts of the city and elsewhere. By the time this section of Central Park was completed in the early 1860s, no clear traces of Seneca Village remained.

Topics. This historical marker is listed in these topic lists: African Americans • Parks & Recreational Areas • Settlements & Settlers. A significant historical date for this entry is July 4, 1799.

Regarding Seneca Village Community. "African American" and "African-American" are used interchangeably in the text.