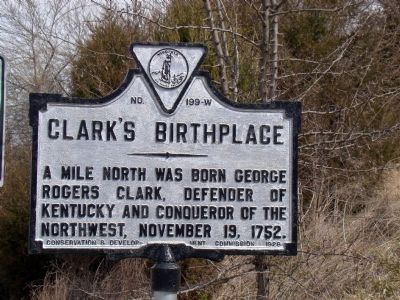 Photographed By J. J. Prats, March 8, 2009
1. Clark’s Birthplace Marker
Inscription.
Clark’s Birthplace. . A mile north was born George Rogers Clark, defender of Kentucky and conqueror of the Northwest, November 19, 1752. . This historical marker was erected in 1928 by Conservation and Development Commission. It is Near Charlottesville in Albemarle County Virginia

A mile north was born George Rogers Clark, defender of Kentucky and conqueror of the Northwest, November 19, 1752.

Topics and series. This historical marker is listed in these topic lists: Colonial Era • War, French and Indian • War, US Revolutionary. In addition, it is included in the Lewis & Clark Expedition, and the Virginia Department of Historic Resources series lists. A significant historical date for this entry is November 19, 1899.

Location. Marker has been permanently removed. It was located near 38° 2.124′ N, 78° 27.24′ W. Marker was near Charlottesville, Virginia, in Albemarle County. Marker was on Stony Point Road (Virginia Route 20) just north of Richmond Road (U.S. 250), on the right when traveling north. Touch for map. Marker was in this post office area: Charlottesville VA 22911, United States of America. Touch for directions.

Other nearby markers. At least 8 other markers are within 2 miles of this location, measured as the crow flies. Birthplace of George Rogers Clark (within shouting distance of this marker); Charlottesville (approx. 0.4 miles away); 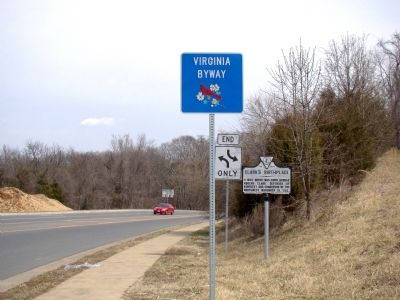 Also see . . .  George Rogers Clark. “George Rogers Clark (1752–1818) was a soldier from Virginia and the highest ranking American military officer on the northwestern frontier during the American Revolutionary War. He served as leader of the Kentucky militia throughout much of the war, Clark is best-known for his celebrated capture of Kaskaskia (1778) and Vincennes (1779), which greatly weakened British influence in the Northwest Territory. Because the British ceded the entire Northwest Territory to the United States in the 1783 Treaty of Paris, Clark has often been hailed as the ‘Conqueror of the Old Northwest’.” (Submitted on March 22, 2009.)
Credits. This page was last revised on April 4, 2021. It was originally submitted on March 22, 2009, by J. J. Prats of Powell, Ohio. This page has been viewed 4,078 times since then and 50 times this year. Photos:   1, 2. submitted on March 22, 2009, by J. J. Prats of Powell, Ohio.
Share this page.