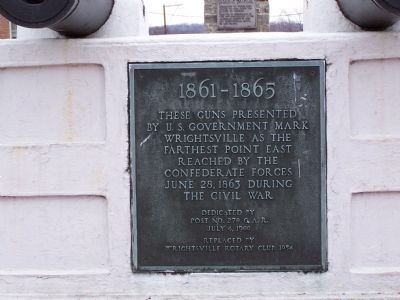 These guns presented by U.S. Government mark Wrightsville as the farthest point east reached by the confederate forces June 28, 1863 during the Civil War.
Dedicated by Post No. 270 G.A.R. July 4, 1900
Replaced by Wrightsville Rotary Club 1954

Topics. This historical marker is listed in these topic lists: Landmarks • Military • Notable Events • War, US Civil. A significant historical date for this entry is June 28, 1863.

Other nearby markers. At least 8 other markers are within walking distance of this marker. Flame of Freedom (a few steps from this marker); U.S.S. Maine Memorial (a few steps from this marker); Ham, Eggs, and Confederates (about 500 feet away, measured in a direct line); The Union Cemetery (approx. 0.2 miles away); Veterans Memorial (approx. 0.2 miles away); Springetsbury Manor 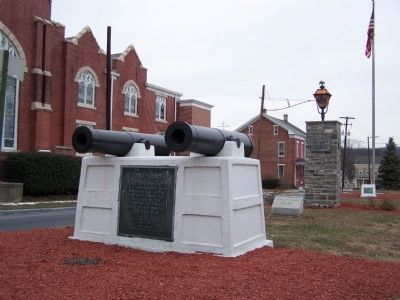 Photographed By Beverly Pfingsten, January 26, 2008
2. Full view of monument.
Flame of Freedom and USS Maine markers in the background. The cannons on the monument are 24-pdr Flank Defense Howitzers, Model 1844. These were typically used only in fortifications to guard entrance ways and side approaches.

Also see . . .  A Tour of Wrightsville. Historian Scott Mingus hosts a tour of Wrightsville discussion the battle fought there on June 28, 1863. In this, part 4 of 7, he provides details of the artillery used in the battle. Note the memorial seen in the background of his videos. (Submitted on June 12, 2010, by Craig Swain of Leesburg, Virginia.) 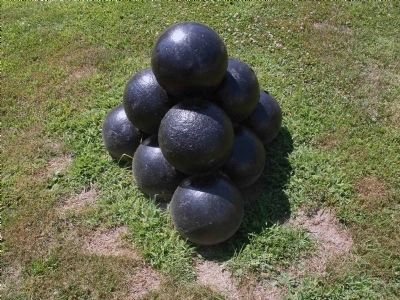