The Battle of Belmont

— The Civil War in Missouri — 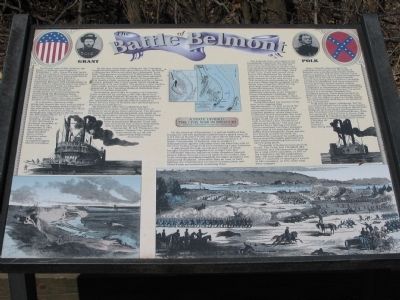 North and west of this location, the Battle of Belmont was fought on November 7, 1861. It was the first battle in which Ulysses S. Grant commanded an army. He had recently been promoted to Brigadier General and placed in command of the federal District of Southeast Missouri with headquarters at Cairo, Illinois. Opposing Grant was Major General Leonidas Polk, an Episcopal bishop turned soldier. Polk was commanding the confederate fortifications at Columbus, Kentucky overlooking the Mississippi River. Directly opposite Columbus, on the Missouri side of the river, was a small hamlet and landing named Belmont.

At Columbus, towering bluffs projected toward the river and provided the first ideal location below Cairo for the placement of artillery batteries. Both sides eyed this location as being strategically important to the control of the Mississippi River. To occupy Columbus, however, would be to violate Kentucky's declared neutrality in the Civil war. On September 3, 1861, the Confederacy made the first move in this direction when Polk's army occupied heights above Columbus.

By the time of the Battle of Belmont, the Columbus fortifications 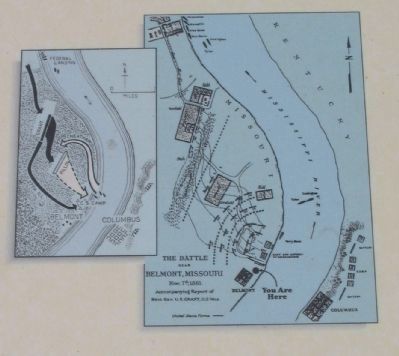 Click or scan to see
this page online
bristled with 140 artillery pieces, including a 128-pounder Whitworth rifled gun nicknamed "Lady Polk." The garrison consisted of 19,000 soldiers. From the fortifications, a mile-long chain had been extended across the river to Belmont to block Union gunboats. This massive chain, requiring a six-ton anchor to hold it in place, enjoyed only a brief career before breaking, apparently of its own weight. The anchor, a short section of the chain, and remnants of the fortifications are preserved at the Columbus-Belmont Battlefield State Park in Columbus, Kentucky.

Immediately after Polk's occupation of Columbus, Grant countered by moving up the Ohio River from Cairo and seizing Paducah, Kentucky on September 6, 1861. Paducah's location in proximity to the mouths of the Tennessee and Cumberland Rivers opened to Union forces a route of invasion into the heartland of the western Confederacy.

By November 1861, the Confederates had established an outpost, called Camp Johnston, at Belmont to serve as an observation post. The decision by Grant to assault this encampment was based on faulty information. He had been led to believe that Polk was to send troops to reinforce pro-Southern forces under General Sterling Price in southwest Missouri. Grant was also concerned that a Union detachment sent to drive the Southern partisan commander, M. Jeff Thompson, the elusive "Swamp Fox," 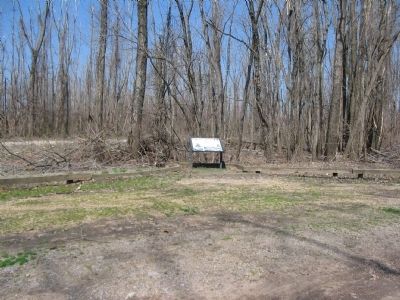 Photographed By Craig Swain, March 17, 2009
3. The Battle of Belmont Marker
from the state would be cut off and captured by Polk's troop movements.

On the morning of November 7, a federal flotilla of four transports and two gunboats landed Grant's attack force of 3,114 men at Hunter's Point, two miles above Belmont. While this force attacked the Confederate camp, General C.F. Smith, Commander at Paducah, was to conduct a demonstration against Columbus from the Kentucky side of the river to discourage Polk from reinforcing Camp Johnston.

A mile march through woods and a tangle of brush brought Grant's two brigades into contact with four Confederate infantry regiments under Brigadier General Gideon Pillow. Formed in line of battle in a cornfield, this body of troops numbered roughly the same as Grant's but was poorly deployed. After more than an hour of hard fighting, the Confederates ran short of ammunition and Grant's men succeeded in scattering them.

The Federals then converged on the Confederate camp from two directions and drove its defenders toward the river where they found protection and concealment behind the nearly vertical embankment at the water's edge. Once in the camp, Grant lost control of his troops who abandoned the attack in order to loot the camp and celebrate what seemed to be an easy victory. This revelry proved premature, for Polk had been observing the progress of the battle from Columbus. While his big guns kept 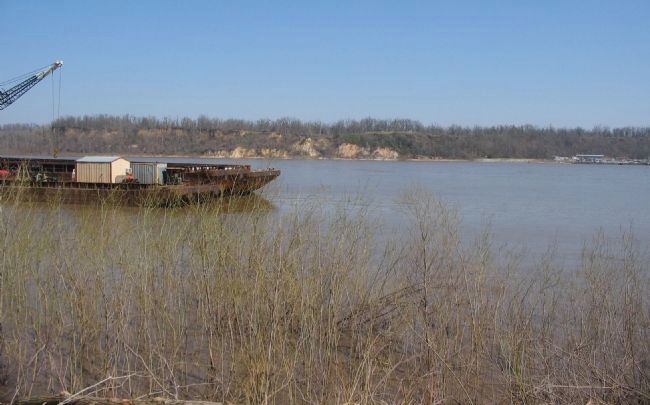 Photographed By Craig Swain, March 17, 2009
4. The Mississippi River at Belmont
Looking from the Missouri shore toward Columbus, Kentucky. The river is approximately 800 yards wide at this point. The bluffs on the Kentucky side have eroded somewhat since the war, but are still imposing. In the center of view on the bluffs are pavilions in Columbus-Belmont State Park. The giant chain spanned the river near this point. And of course to the left is a river barge, indicating this section of the river sees a lot of traffic even in modern times.
Grant's gunboats at a respectful distance, Polk sent two steamers across the river with additional regiments under Brigadier General Benjamin Cheatham. Their orders were to tear into Grant's flank and prevent his force from retreating to their transports.

Grant described the reaction of his men to the approaching reinforcements, "At first some of the officers seemed to think that to be surrounded was to be placed in a hopeless position, where there was nothing to do with surrender. But when I announced that we had cut our way in and could cut our way out just as well, it seemed a new revelation to officers and soldiers." The way back involved fierce fighting and many Union casualties, but Grant managed to get most of his army back to the safety of the transports. Grant was the last federal to leave the field. He boarded the transport by guiding his horse down the nearly perpendicular river bank and trotting him across a narrow gang plank.

Grant himself, acknowledged the criticisms of the North that the Battle of Belmont was a wholly unnecessary 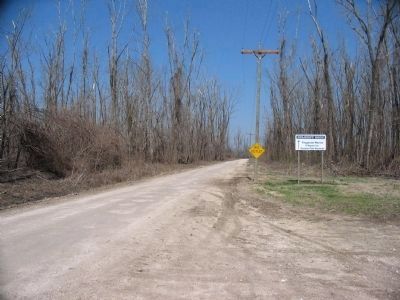 Photographed By Craig Swain, March 17, 2009
5. Grant's Landing
Looking north from the parking area. Grant's initial landing, and the site of the evacuation, was roughly two miles north of Belmont at Hunter's Point. Today the river has changed course, leaving a dead river bend and Island No. 4 on the western shore (thus part of Kentucky on the Missouri side of the river). The site of Hunter's Point is on private property, beyond the end of this service road.
battle barren of results. But he still insisted, in his Personal Memoirs, that he had accomplished his objectives. He felt he had prevented troops from being detached from Columbus for service elsewhere, and more important, he had given his troops needed combat experience. "The National troops acquired a confidence in themselves at Belmont that did not desert them through the war," he wrote. Despite the inevitable mistakes of a neophyte general, Grant demonstrated at Belmont his steadiness of judgment under fire, and his ability to get out of tight spots - two qualities that were key to his greatness as a commander.

Polk won the Battle of Belmont, but his successful defense was in vain. Four months after Belmont, Grant launched an attack from Paducah on Forts Henry and Donelson on the Tennessee and Cumberland Rivers. With the surrender of these forts to Grant, Polk was flanked at Columbus and compelled to abandon the massive fortifications of this "Gibraltar of the West" without a shot being fired.

Topics and series. This historical marker is listed in this topic list: War, US Civil. In addition, it is included in the Former U.S. Presidents: #18 Ulysses S. Grant, and the Missouri - A State Divided: The Civil War in Missouri series lists. A significant historical month for this entry is September 1713. 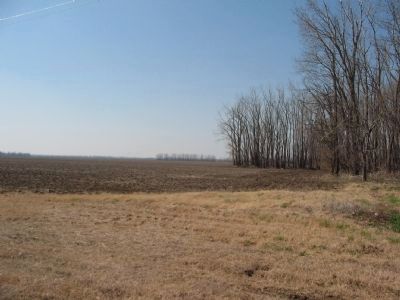 Photographed By Craig Swain, March 17, 2009
6. The Federal Advance
Looking from the state highway to the northwest, at a point about 500 yards west of the marker. Grant's brigades advanced south from Hunter's Point over what was heavy thickets at the time. The 27th Illinois Infantry moved through those thickets along a plank road in this vicinity, arriving on the Confederates left flank at a critical phase of the battle.
36° 45.952′ N, 89° 7.429′ W. Marker is in Belmont, Missouri, in Mississippi County. Marker is on State Highway 80, on the right when traveling east. Located in a small parking area at the end of the highway, near a "towhead" along the Mississippi River. Touch for map. Marker is in this post office area: East Prairie MO 63845, United States of America. Touch for directions.

More about this marker. Flanking the marker title are portraits of Generals Grant and Polk. In the center is a wartime map of the battle. Beside the text to the left is a sketch showing a steamboat unloading soldiers. To the right of the text is another sketch showing one of the light gunboats similar to those used at Belmont. In the lower left of the marker is a sketch which appears to show the river from the Kentucky side. On the lower right a wartime sketch depicts the fighting at Belmont. 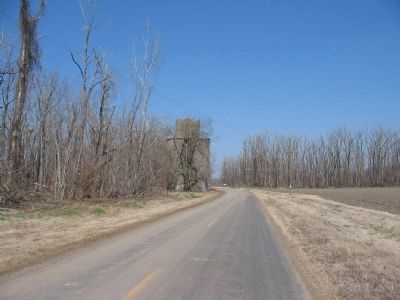 Photographed By Craig Swain, March 17, 2009
7. Belmont
Today the only readily visible structure in Belmont is an old grain elevator along the highway. And even that structure is likely of early 20th century vintage. 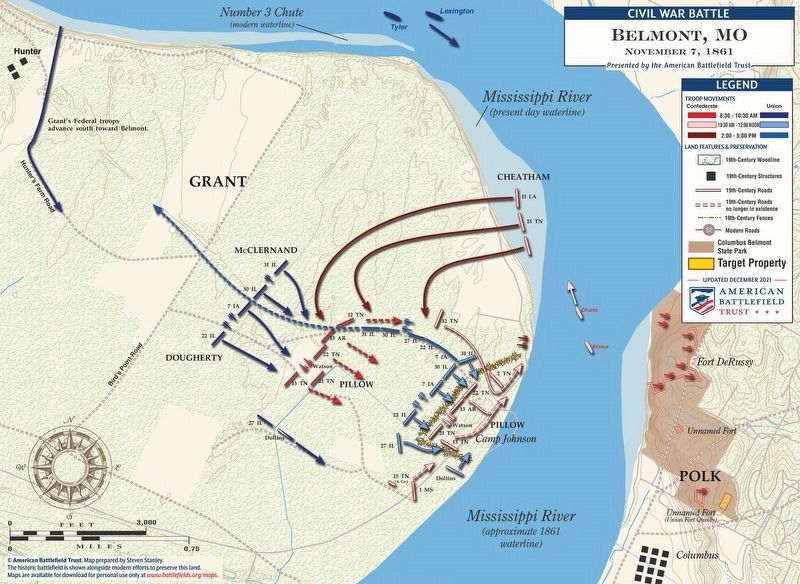