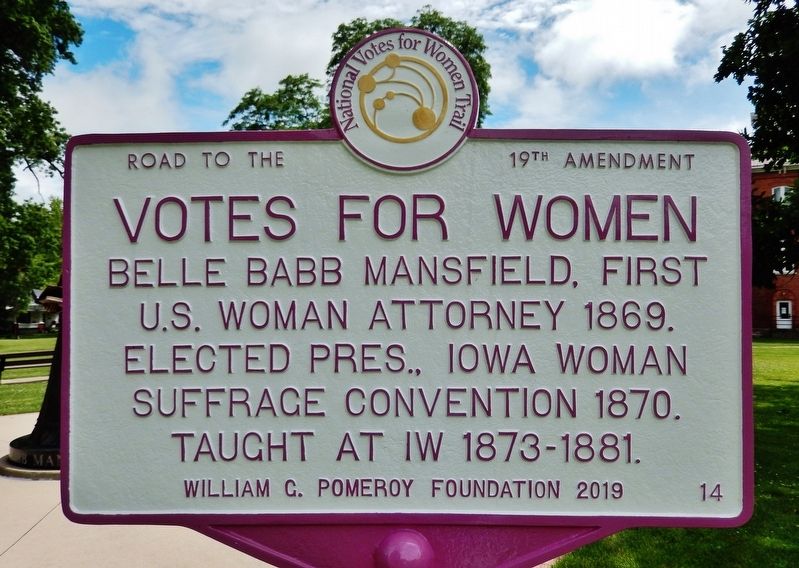 Topics and series. This historical marker is listed in these topic lists: Civil Rights • Women. In addition, it is included in the National Votes for Women Trail, and the William G. Pomeroy Foundation series lists. A significant historical year for this entry is 1870.

Location. 40° 58.444′ N, 91° 33.25′ W. Marker is in Mount Pleasant, Iowa, in Henry County. Marker is on North Broadway Street south of East Broad Street, on the left when traveling south. Marker is located beside the Belle Babb Mansfield monument on the Iowa Wesleyan University campus. Touch for map. Marker is at or near this postal address: 601 North Main Street, Mount Pleasant IA 52641, United States of America. Touch for directions. 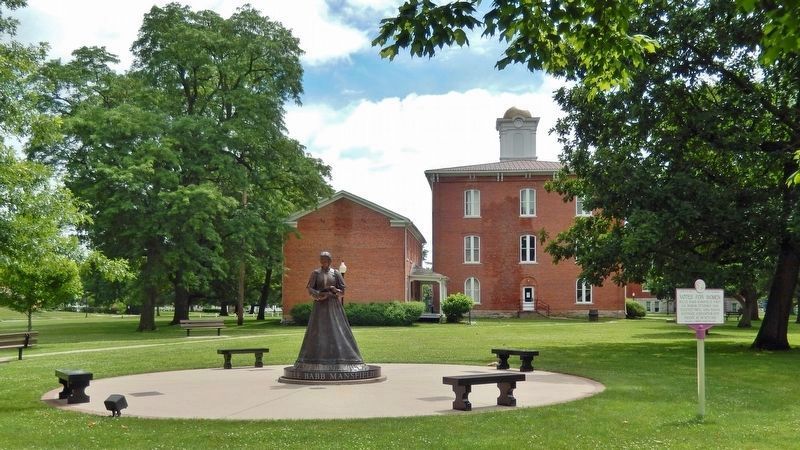 Click or scan to see
this page online
distance of this marker); P.E.O. Sisterhood Founded (within shouting distance of this marker); James Harlan (about 700 feet away, measured in a direct line); Das Deutsches Kollegium (about 700 feet away); Harlan Hotel (approx. 0.4 miles away); Replica of the Statue of Liberty (approx. 0.6 miles away). Touch for a list and map of all markers in Mount Pleasant.

Related markers. Click here for a list of markers that are related to this marker. Belle Babb Mansfield - Votes for Women

Also see . . .
1. Belle Babb Mansfield. In 1869, Belle was the first woman to pass the Bar Exam in the United States with the recommendation for entry by lawyers Edwin Van Cise and George B. Corkhill. This set a precedent for the future admittance of other women into the profession. Just a year later, in June 1870, Belle served as the presiding president of the state’s first “enfranchisement” convention in Mount Pleasant. This two-day event yielded the establishment of the Iowa Woman’s Suffrage Association. (Submitted on July 23, 2021, by Cosmos Mariner of Cape Canaveral, Florida.)

2. How Iowa’s Women Fought for the Right to Vote. A women’s rights convention held in Mount Pleasant in 1870 inspired the formation of the Iowa Woman Suffrage Association (IWSA). That same year, Iowa’s legislature approved a resolution to amend Iowa’s constitution to allow women to vote. Smooth sailing for Iowa suffragists, right? Not quite. Repeatedly, Iowa suffragists tried but failed to amend their state constitution. (Submitted on July 23, 2021, by Cosmos Mariner of Cape Canaveral, Florida.)