The Arrival of the First Japanese Naval Ship 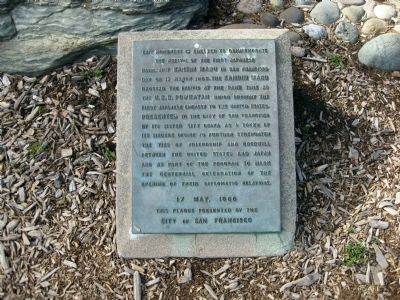 This monument is erected to commemorate the arrival of the first Japanese naval ship Kanrin Maru in San Francisco Bay on 17 March, 1860. The Kanrin Maru crossed the Pacific at the same time as the U.S.S. Powhatan which brought the first Japanese Embassy to the United States. Presented to the City of San Francisco by its sister city Osaka as a token of its sincere desire to further strengthen the ties of friendship and goodwill between the United States and Japan and as part of the program to mark the centennial celebration of the opening of their diplomatic relations.
17 May, 1960
This plaque presented by the City of San Francisco

Erected 1960 by City of San Francisco.

Topics. This historical marker is listed in these topic lists: Notable Events • Waterways & Vessels. A significant historical date for this entry is March 17, 1860. 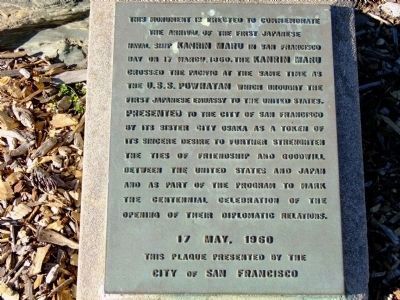 Photographed By Jordan Yee AKA "Ranger Yee", December 2009
2. The Arrival of the First Japanese Naval Ship Marker
A closer view of the marker text.

Click or scan to see
this page online
on El Camino del Mar. Touch for map. Marker is in this post office area: San Francisco CA 94121, United States of America. Touch for directions.

Other nearby markers. At least 8 other markers are within walking distance of this marker. "The Holocaust" (within shouting distance of this marker); Frances E. Willard (about 300 feet away, measured in a direct line); Soldiers who Perished in WWII (about 300 feet away); Western Terminus of the Lincoln Highway (about 500 feet away); Historic Shipwrecks - Lost at the Golden Gate (approx. ¼ mile away); Electric Streetcar Line (approx. half a mile away); China Beach (approx. 0.6 miles away); Navigating the Golden Gate - Bonfires, buoys, and foghorns (approx. 0.6 miles away). Touch for a list and map of all markers in San Francisco.

More about this marker. The marker is located in Lincoln Park, on the ocean side of El Camino del Mar, just a few hundred feet to the north of the entrance of the California Palace of the Legion of Honor.

Regarding The Arrival of the First Japanese Naval Ship. • The Kanrin Maru, Japan's first steam-driven screw-propelled corvette, was built in the Netherlands and delivered in 1857, and represented the most advanced technology available at the time.

• This was only the second overseas Japanese Embassy, the first having been the embassy of Hasekura Tsunenaga to Mexico and then Europe in 1614.

• The Japanese Embassy actually traveled aboard the USS Powhatan, not the Karin Maru, although the latter arrived in San Francisco 12 days earlier, as the Powhatan had been damaged by a typhoon and was forced to stop 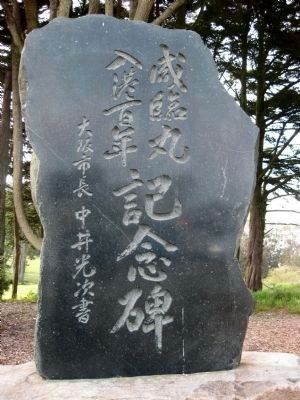 Photographed By Andrew Ruppenstein, April 18, 2009
3. Kanrin Maru Memorial Monument
A gift of the city of Osaka to its sister city, San Francisco, upon the centennial of the Kanrin Maru's arrival in San Francisco, the monument reads,"Kanrin Maru Centennial Memorial, [from the] Osaka City Mayor".
in Honolulu for repairs.

• The USS Powhatan , named after the Indian chief who was the father of Pocahantas, was built in the Norfolk Navy Yard and launched in 1850. She served in the East India Squadron from 1853-1860. She was Commodore Perry's flagship when the Kanagawa Treaty was signed on her deck in Tokyo Bay on March 13, 1854, thus securing for the US the right to trade at the Japanese ports of Hakodate and Shimoda.

• The Kanrin Maru saw action in the Boshin War, the Japanese civil war between the Bakufu (Shogun) and pro-imperial forces. Initially on the Bakufu side, she was captured by Imperial forces in September, 1868, and later sank in a typhoon in 1871.

• The USS Powhatan saw action in the US Civil War, assisting in the relief of Fort Picken in 1861, and later that year helping to establish blockades of Mobile Bay and the Mississippi river area. Later she deployed off Charleston, South Carolina and in the West Indies, and ended the war by participating in the assault and capture of Fort Fisher in Wilmington, North Carolina in December 1864 and January 1865. After the Civil War, the Powhatan operated for a time in the South Pacific and Carribean, and was ultimately scrapped in 1887.

• On March 17th, 1990, a replica of the Kanrin Maru (also built in the Netherlands) docked in San Francisco to commemorate 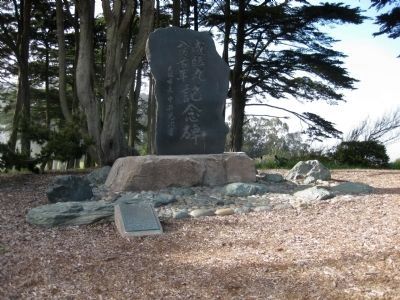 Photographed By Andrew Ruppenstein, April 18, 2009
4. Kanrin Maru Marker and Monument
Although the marker and monument commemorate the arrival of the Kanrin Maru in San Francisco, it is not where the ship would have docked. The monument location is high up on a bluff, with a direct view west out over the Pacific Ocean, whereas the ship sailed through the Golden Gate into San Francisco Bay and docked at the city's port facilities, several miles east of the marker location.
the achievement of its namesake. The Consulate General of Japan in San Francisco threw a party, amd four days later the new Kanrin Maru sailed on to Honolulu and then Yokohama.


Also see . . .
1. The Ordeal of the KANRIN MARU. An American Heritage (Vol.14, No.5) article, by Emily V. Warriner, describing the voyage of the Kanrin Maru to San Francisco. Based upon the journal of Lt. John Mercerer Brooke, the US Officer on board the Kanrin Maru, Warriner describes how Brooke may have rescued the voyage from disaster. (Submitted on April 25, 2009.)

2. Japanese warship Kanrin Maru. Wikipedia.org's article on the history of the Kanrin Maru. (Submitted on April 25, 2009.) 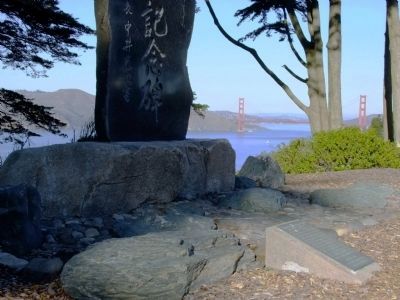 Photographed By Jordan Yee AKA "Ranger Yee", circa December 1, 2009
5. The Arrival of the First Japanese Naval Ship Markers
The bronze marker is in English and the sculpted stone marker is in Japanese. 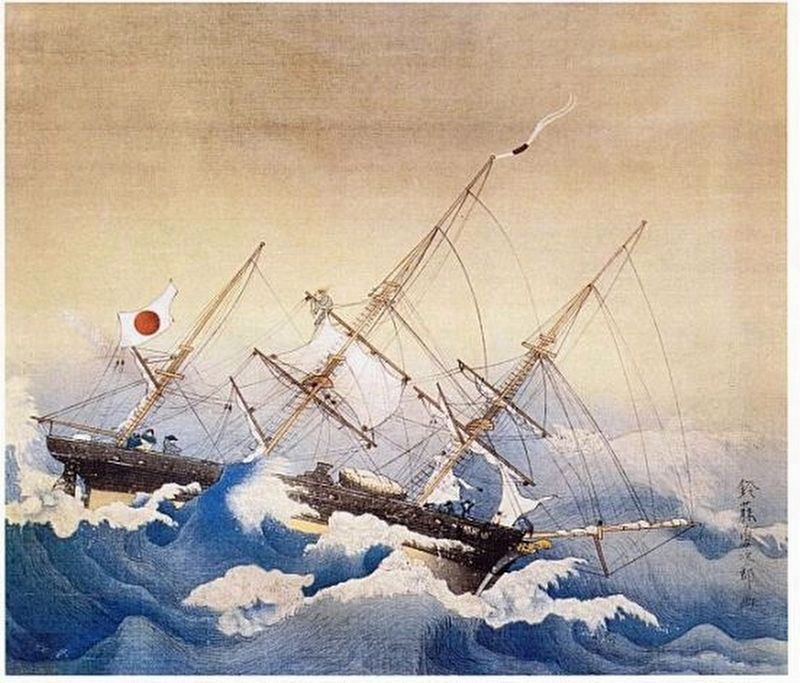 Photographed By Larry Gertner, unknown
6. “The Kanrinmaru in Rough Seas" 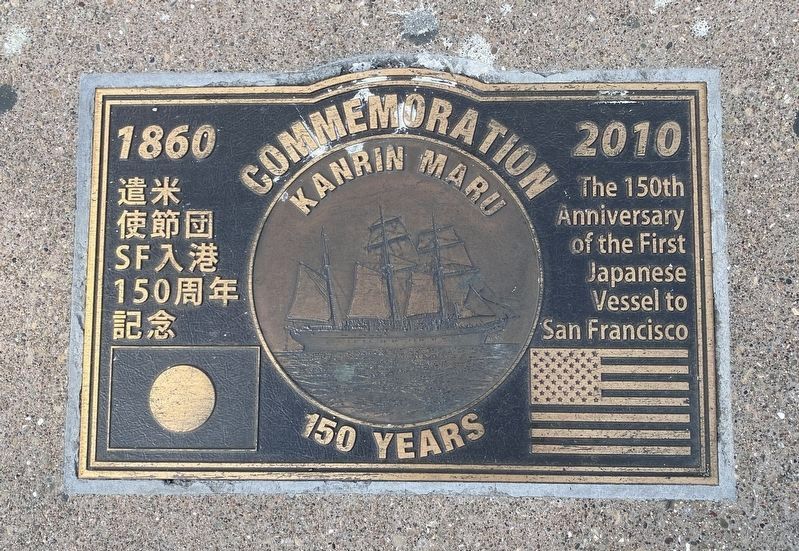