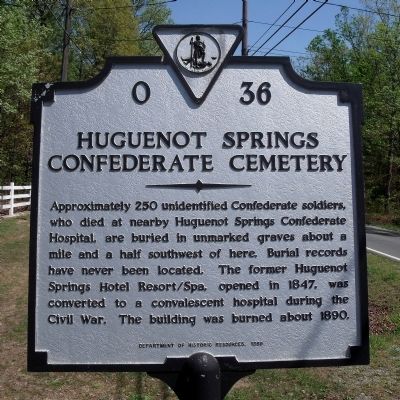 Approximately 250 unidentified Confederate soldiers, who died at nearby Huguenot Springs Confederate Hospital, are buried in unmarked graves about a mile and a half southwest of here. Burial records have never been located. The former Huguenot Springs Hotel Resort/Spa, opened in 1847, was converted to a convalescent hospital during the Civil War. The building was burned about 1890.

Topics and series. This historical marker is listed in these topic lists: Cemeteries & Burial Sites • War, US Civil. In addition, it is included in the Virginia Department of Historic Resources series list. A significant historical year for this entry is 1847.

Location. 37° 33.783′ N, 77° 42.07′ W. Marker is near Powhatan, Virginia, in Powhatan County. Marker is at the intersection of Huguenot Trail (Virginia Route 711) and Huguenot Springs Road, on the right when traveling west on Huguenot Trail. Touch for map. Marker is in this post office area: Midlothian VA 23113, United States of America. Touch for directions. 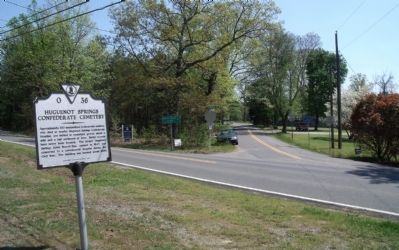 Also see . . .  The Huguenot Society of the Founders of Manakin In the Colony of Virginia. Huguenot Springs Hotel (Submitted on April 28, 2009, by Bernard Fisher of Richmond, Virginia.) 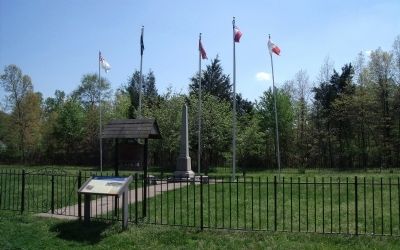