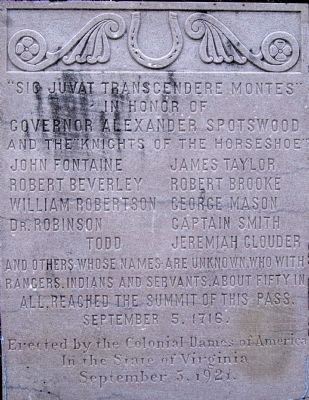 Photographed By Dawn Bowen, July 22, 2007
1. In Honor of Governor Alexander Spotswood Marker
Inscription.
“Sic Juvat Transcendere Montes”. . In honor of Governor Alexander Spotswood and the Knights of the Horseshoe: John Fontaine . Robert Beverley . William Robertson . Dr. Robinson Todd . James Taylor . Robert Brooke . George Mason . Captain Smith . Jeremiah Clouder and other whose names are unknown, who with rangers, Indians and servants, about fifty in all, reached the summit of this pass. September 5, 1716. . This historical marker was erected in 1921 by Colonial Dames of America in the State of Virginia, September 5th. It is Near Elkton in Rockingham County Virginia

In honor of Governor Alexander Spotswood and the Knights of the Horseshoe: John Fontaine • Robert Beverley • William Robertson • Dr. Robinson Todd • James Taylor • Robert Brooke • George Mason • Captain Smith • Jeremiah Clouder and other whose names are unknown, who with rangers, Indians and servants, about fifty in all, reached the summit of this pass. September 5, 1716.

Erected 1921 by Colonial Dames of America in the State of Virginia, September 5th.

Topics and series. This historical marker is listed in these topic lists: Colonial Era • Exploration • Native Americans • Settlements & Settlers. In addition, it is included in the The Colonial Dames of America, National Society of series list. A significant historical month for this entry is September 1849.

Location. 38° 21.461′ N, 78° 32.832′ W. Marker is near Elkton, Virginia, in Rockingham County. Marker is at the intersection of Spotswood Trail (U.S. 33) and Skyline Drive, on the right when traveling east on Spotswood Trail. Touch for map. Marker is in this post office area: Elkton VA 22827, United States of America. Touch for directions.

Other nearby markers. At least 8 other markers are within 6 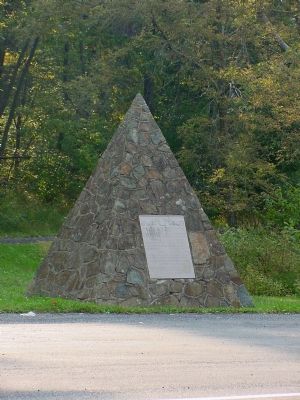 More about this marker. This marker is at the crest of Swift Run Gap of the Blue Ridge Mountains.

Regarding “Sic Juvat Transcendere Montes”. This latin phrase translates to “thus it is a pleasure to cross the mountains.” This phrase was inscribed on each of the golden horseshoes Governor Spotswood later gave to each of his companions on this horseback expedition of exploration from Germanna to the Shenandoah Valley and back. Perhaps Governon Spotswood used this phrase as a toast to his fellow explorers, perhaps somewhere near here. —Ed.

Additional commentary.
1. The Story of the Knights of 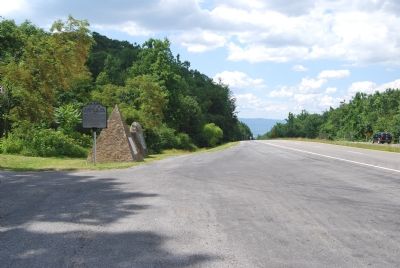 Photographed By Dawn Bowen, July 22, 2007
3. Three Markers at the Summit of the Pass
The Shenandoah Valley lies ahead.
the Golden Horseshoe
from chapter 21 of the 1917 book This Country of Ours by H. E. (Henrietta Elizabeth) Marshall.

... Other governors followed him, many of them worthless ... Some were good, and one of the best was a Scotsman, Alexander Spotswood. ... It was he, too, who first explored “the West.”

Virginia up till now had lain between the sea and the blue range of mountains which cut it off from the land behind. To the English that was a land utterly unknown. All they knew was that the French were claiming it. But Governor Spotswood wanted to know more. So one August he gathered a company of friends, and set forth on an exploring expedition. With servants and Indian guides they made a party of about fifty or so, and a jolly company they were. They hunted by the way, and camped beneath the stars. There was no lack of food and drink, and it was more like a prolonged picnic than an exploring expedition.

The explorers reached the Blue Ridge, and, climbing to the top of a pass, looked down upon the beautiful wild valley beyond, through which wound a shining river. Spotswood called the river the Euphrates.
But fortunately the name did not stick, and it is still called by its beautiful Indian name of Shenandoah.

Spotswood named the highest peak he saw Mount George in honour of the King, and his companions gave the 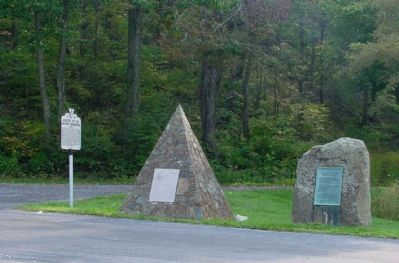 Photographed By J. J. Prats, September 27, 2007
4. Three Markers at the Summit of the Pass
next highest peak the name of Mount Alexander in honour of the Governor whose Christian name
was Alexander. Then they went down into the valley below, and on the banks of the river they buried a bottle, inside which they had put a paper declaring that the whole valley belonged to George I, King by the Grace of God of Great Britain, France, Ireland and Virginia.

After that the merry party turned homewards. They climbed to the top of the gap, took a last look at the fair valley of the unknown West, and then went down once more into the familiar plains of Virginia.

For this expedition all the horses were shod with iron, a thing very unusual in Virginia where there were no hard or stony roads. So as a remembrance of their pleasant time together Spotswood gave each of his companions a gold horseshoe set with precious stones for nails. Graven upon them were the Latin words, Sic juvat transcendere montes which mean, “Thus it is a pleasure to cross the mountains.” Later all those who took part in the expedition were called Knights of the Golden Horseshoe.
— Submitted July 27, 2007, by J. J. Prats of Powell, Ohio.