Erected 2008 by Furman University Board of Trustees.

Topics. This historical marker is listed in these topic lists: Education • Man-Made Features • Women. A significant historical year for this entry is 1939. 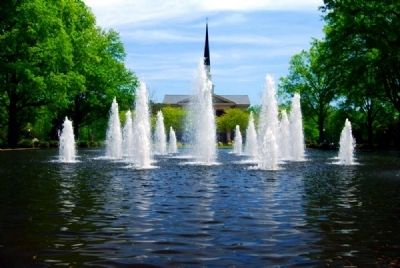 Beatrice Elizabeth Dennis Plyler, widow of John Laney Plyler, died Saturday, June 11, 2011, at her home. Her memorial service will be conducted by Dr. Vaughn CroweTipton and Rev. Baxter Wynn on Tuesday, June 14, at 3:00 pm in the Daniel Memorial Chapel of Furman University. A private burial will precede the memorial service. Following the service, the family will receive friends in the Bryan Garden Room of Daniel Chapel.

Bea Plyler, the daughter of Edward James and Ella Mae Coney Dennis, was born in Macbeth, SC in 1911. She graduated from Berkeley High School and Asbury College. Bea and John Plyler married in 1932, and she has resided in Greenville since that time. Predeceasing her were her four brothers: E.J., Rembert, Markley, and "Billy" Dennis; two sisters; "Dick" Lacey and Maxine Jones; and grandson James Williams Plyler II.

Furman University presented Bea with the Mary Mildred Sullivan Award in 1977, and in 1996, the fountain on Milford Mall opposite Daniel Chapel was named in her honor. Furman awarded her an honorary Doctor of Humanities in 2004 with the tribute reading in part: "She and her husband had the special ability to dream big dreams, and once the decision was made to move Furman from downtown Greenville to its current location, she played a significant part in ensuring that everything about the new campus would make it a place of beauty. Inspired by the lakes and fountains of Europe, she suggested including similar elements in the campus design. Her influence is evident throughout the campus landscape and in the decor and furnishings. For decades as wife of Furman's president and afterward, she has cultivated countless friends for Furman. By her very nature she has taught generations of students the arts of graciousness and hospitality."

She was a member of the First Baptist Church of Greenville for seventy-nine years and served in many capacities in the church. Bea Plyler loved and was devoted to her Lord and church, her family, and Furman University.

The family wishes that in lieu of flowers, memorials be made to the Beatrice Dennis Plyler Scholarship at Furman University, to First Baptist Church Greenville or to a charity of one's choosing.