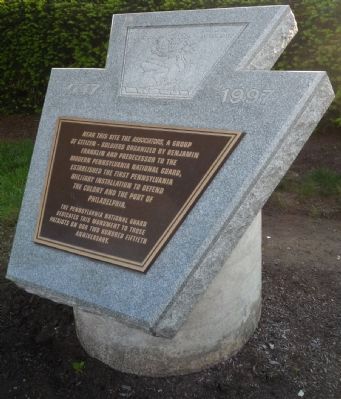 The Rampant Lion [Image of a lion with sword and shield] Crest of the the PA National Guard.

Near this site, the Associators, a group of citizen-soldiers organized by Benjamin Franklin and predecessor to the modern Pennsylvania National Guard, established the first Pennsylvania military installation to defend the colony and the port of Philadelphia.

The Pennsylvania National Guard dedicates this monument to those patriots on our two hundred fiftieth anniversary.

Location. 39° 58.011′ N, 75° 7.717′ W. Marker is in Philadelphia, Pennsylvania, in Philadelphia County. Marker is at the south end of the Penn's Landing riverfront walkway, just north of Lombard Circle, south of the Moshulu floating restaurant and east of the Landing's parking lot off South 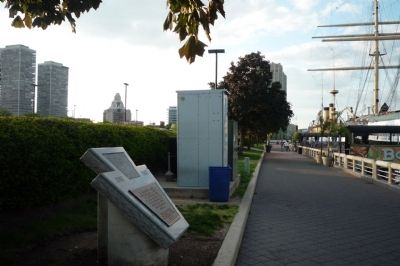 Photographed By Richard E. Miller, May 12, 2009
2. "Associators" Marker, lower left, center
view northward along the riverwalk, toward the Independence Seaport Museum, with the historic bark, Moshulu (now preserved as a floating restaurant) moored to the right.

Click or scan to see
this page online
Delaware Avenue/Columbus Road. Touch for map. Marker is at or near this postal address: 401 South Columbia Boulevard, Philadelphia PA 19125, United States of America. Touch for directions.

Also see . . .  1st Battalion, 111th Infantry Regiment (Mechanized) - "Associators". ...In the 18th century, the English colonies in America were under constant threat of invasion, either from the French, the Indians or the Spanish. The king of England organized units throughout the colonies to defend the inhabitants from various attacks. For the first 75 years of its existence, however, Pennsylvania was controlled by Quakers, who abhorred violence and resisted forming units.
In 1747, Philadelphia was under a serious threat of French privateers coming up the Delaware River. Benjamin Franklin, already a preeminent Philadelphia politician, recognized the need to create a defense force. Cognizant of the Quaker beliefs, he proposed 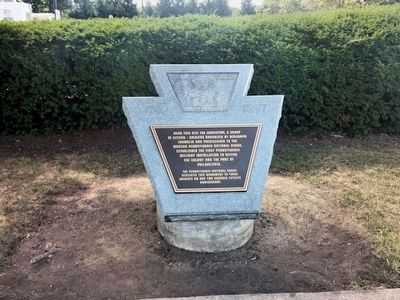 Photographed By Carolyn Martienssen, August 29, 2014
3. "Associators" Marker
an association of volunteer militia to defend Philadelphia. Thus on December 7, 1747, the Associators were formed as Pennsylvania's first citizen militia. ... (Submitted on May 17, 2009, by Richard E. Miller of Oxon Hill, Maryland.)