(top):
Abraham Lincoln attended services at this church on November 19, 1863, the day he dedicated the National Cemetery and delivered his Gettysburg Address. The pew he occupied has been retained in the sanctuary.

(lower):
Dwight D. Eisenhower was a member of this church February 1, 1961 to March 28, 1969. The pew he occupied has been retained in the sanctuary

Topics and series. This historical marker is listed in these topic lists: Cemeteries & Burial Sites • Churches & Religion • War, US Civil. In addition, it is included in the Former U.S. Presidents: #16 Abraham Lincoln, and the Former U.S. Presidents: #34 Dwight D. Eisenhower series lists. A significant historical date for this entry is February 1, 1888. 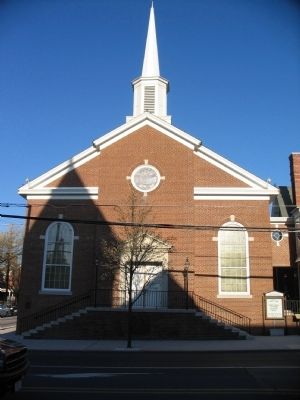 Photographed By Craig Swain, April 4, 2009
2. Presbyterian Church
The plaques are on the left corner of the church in this view.