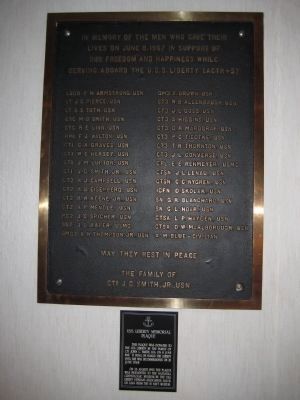 In memory of the men who gave their lives on June 8, 1967 in support of our freedom and happiness while serving aboard the U.S.S. Liberty (AGTR-5).

May they rest in peace 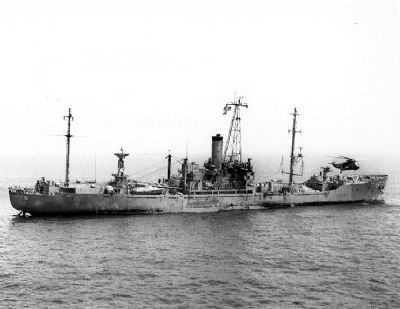 2. U.S.S. Liberty
US Navy photo of the Liberty after it was attacked.
39° 6.886′ N, 76° 46.488′ W. Marker is in Fort Meade, Maryland, in Anne Arundel County. Memorial can be reached from Colony Seven Road 0.4 miles north of Canine Road. Marker is located within the National Cryptologic Museum. It used to hang on board the U.S.S. Liberty until she was decommissioned on 28 June 1968. Touch for map. Marker is in this post office area: Fort George G Meade MD 20755, United States of America. Touch for directions.

Regarding U.S.S. Liberty. The U.S.S. Liberty was attacked by the Israeli Air Force and Navy in international waters in the Mediterranean Sea during the Six Day Arab-Israeli War in 1967. Considerable controversy surrounds the incident. The U.S.S. Liberty was a "technical research ship" now known to be collecting intelligence by monitoring communications. The Israelis claim they accidentally attacked the ship by misidentifying it as an unknown destroyer and possible Egyptian cargo ship. There are numerous accounts of the incident and theories about why they ship was attacked. Search "USS Liberty" on the Internet.