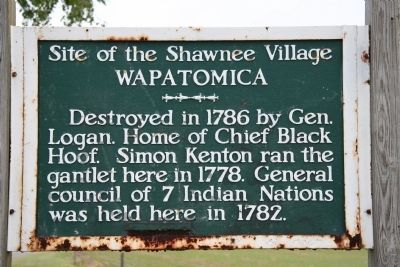 Photographed By Dale K. Benington, June 4, 2009
1. Site of the Shawnee Village, Wapatomica Marker
Inscription.
Wapatomica. Ohio Revolutionary Memorial Trail.
Site of the Shawnee Village Wapatomica »»«« Destroyed in 1786 by General Logan. Home of Chief Black Hoof. Simon Kenton ran the gantlet here in 1778. General council of 7 Indian Nations was held here in 1782.. . This historical marker was erected in 1930 by Ohio Revolutionary Memorial Commission. It is Near Zanesfield in Logan County Ohio

Site of the Shawnee Village
Wapatomica
»»««
Destroyed in 1786 by General
Logan. Home of Chief Black
Hoof. Simon Kenton ran the
gantlet here in 1778. General
council of 7 Indian Nations
was held here in 1782.

Topics and series. This historical marker is listed in these topic lists: Native Americans • War, US Revolutionary • Wars, US Indian. In addition, it is included in the Ohio Revolutionary Memorial Commission series list. A significant historical year for this entry is 1786.

Location. 40° 18.509′ N, 83° 42.134′ W. Marker is near Zanesfield, Ohio, in Logan County. Marker is on County Route 5, 0.1 miles south of County Route 29, on the left when traveling north. This historical marker is located in Logan county, along County Road 5, where the roadway crosses a small stream that runs into the nearby Mad River, almost midway between the villages of West Liberty and Zanesfield. Touch for map 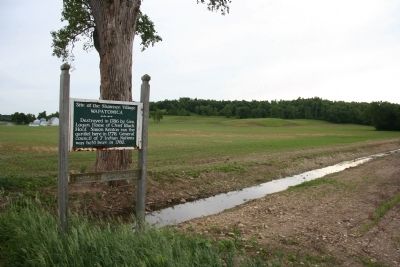 Photographed By Dale K. Benington, June 4, 2009
2. Site of the Shawnee Village Marker
View of historical marker next to the stream that runs into the nearby Mad River.

Click or scan to see
this page online
. Marker is in this post office area: Zanesfield OH 43360, United States of America. Touch for directions.

Originally, back in 1930, there were erected 70 some of these Ohio Revolutionary Memorial Commission, type C, markers. To date, there are only 20 some of them that have been located and posted on the Historical Marker database. A number of them are presently missing, but this particular marker, which is listed on page 72 of the ORMC 1931 Planning Report, is still with us (although it looks like it is in an advanced state of deterioration).

Regarding Wapatomica. In his book, "Buckeye Battlefields" (copyright 1999), author Edwin A. Kramb states the following regarding General Benjamin Logan's 1786 raid on Indian villages in Ohio:

"In the summer of 1786, General George Rogers Clark, at his home in Louisville, received an intelligence report that indicated a large Indian army with some British agents were to assemble on the upper Wabash in September or October. Clark immediately organized a force of militia to counter this anticipated Indian assembly and to retaliate for all the Indian raids of the past summer. Some 2,000 militia troops gathered in Louisville on 10 September, and General Clark led them north into the upper Wabash River 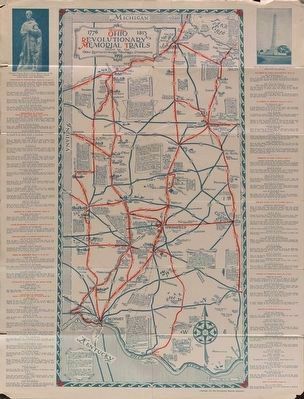 Image courtesy of the MidPointe Library System (www.MidPointeLibrary.org)
3. Ohio Revolutionary Memorial Trail Map
A view of an original Ohio Revolutionary Memorial Trail Map, from 1930. For a better view double click on this picture.
area in present-day Indiana. In addition, Clark ordered Colonel Benjamin Logan to collect another militia force and to lead his force into the upper Miami River valley against the Shawnee villages as a diversionary strike. These thrusts into Indian lands were to take place at the same time."

"Colonel Logan assembled approximately 800 militia troops at Limestone (Maysville). They crossed the Ohio River in the last days of September and moved north. They moved almost directly north from Limestone to the Shawnee village of Mackachack on the upper Mad River. Mackachack was located near the present-day town of West Liberty, Ohio. Logan's army arrived in the vicinity of Mackachack around noon on the 6th day of October. He had organized his troops into three columns. The left column was ordered to attack a smaller Indian village on the west bank of the Mad River opposite Mackachack. The center and right wing would attack Mackachack proper. The order was given, and the army charged quickly toward their objectives."

"Most of the Shawnee warriors were attending that large assembly of Indians that caused the great concern of General Clark. Therefore, they were not present to defend their own villages when Colonel Logan's attack occurred. Logan easily overran Mackachack and captured a number of prisoners. Logan's men then proceeded to attack and destroy several other Shawnee

"The assault against the Shawnee villages by Logan's men continued for two days. Wapatomica, located about four miles east-southeast of the present-day city of Bellefontaine, Ohio and Wapakoneta, located at the present-day city of Wapakoneta, Ohio, were among those villages that were destroyed by Logan's army. At a cost of three men killed and three others wounded, Colonel Logan's raiders then reassembled for their withdrawal. They had killed 22 Indians, captured 33 prisoners who were mostly women, destroyed more than 8 villages, and burned a large amount of foodstuffs and fields of crops. Several of the Indian casualties, however, may be more accurately characterized as murder. For example, an old Shawnee chief by the name of Moluntha was killed by a member of Logan's army after the old chief had surrendered. The killer was a survivor of that ambush at Blue Licks which occurred more than four years ago, but he killed Chief Moluntha in revenge for that long ago disaster."

"On 8 October, Logan issued the order to withdraw back to Limestone. They arrived at the Ohio River in less than a week, and there the army disbanded. The raid on Mackachack was considered quite successful when compared to General Clark's main raid up the Wabash. Clark's army progressed only part way to their destination before supply problems, desertion problems, discipline problems, and other problems forced the General to withdraw back to Louisville without making any attack."

In some respects, Logan's raid on Mackachack and the other Shawnee villages had the opposite effect than that desired. In addition to being considered a retaliatory strike, many Americans had expected the raid would also intimidate the Shawnee and perhaps bring an end to the Indian raids on their settlements. But rather than intimidate, the raid caused the various groups of the Shawnee Tribe to join forces. They then became more aggressive and posed a greater threat to the American settlements than before Logan's raid. Life on the American frontier continued, then, to be quite a challenge for the Americans."

Also see . . .
1. Benjamin Logan. This link is published and made available by, "Ohio History Central," an online encyclopedia of Ohio History. (Submitted on June 9, 2009, by Dale K. Benington of Toledo, Ohio.)

2. Catahecassa, also known as Black Hoof. This link is published and made available by, "Ohio History Central," an online encyclopedia of Ohio History. (Submitted on June 9, 2009, by Dale K. Benington of Toledo, Ohio.)

3. Simon Kenton. This link is published and made available by, "Ohio History Central," an online encyclopedia of Ohio History. (Submitted on June 9, 2009, by Dale K. Benington of Toledo, Ohio.)

4. Simon Kenton. This web link was both published and made available by, "Touring Ohio." (Submitted on June 9, 2009, by Dale K. Benington of Toledo, Ohio.)