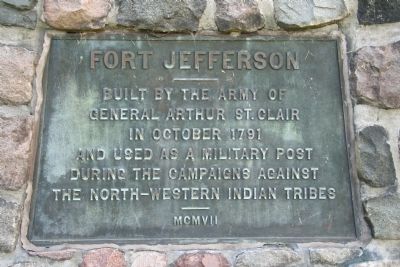 By Dale K. Benington, June 5, 2009
1. Fort Jefferson Marker
Inscription.
Fort Jefferson. .
Built by the Army of General Arthur St. Clair in October 1791 and used as a military post during the campaigns against the North-Western Indian tribes MCMVII. . This historical marker was erected in 1907. It is in Fort Jefferson in Darke County Ohio

Built by the Army of
General Arthur St. Clair
in October 1791
and used as a military post
during the campaigns against
the North-Western Indian tribes
MCMVII

Location. 40° 1.546′ N, 84° 39.401′ W. Marker is in Fort Jefferson, Ohio, in Darke County. Marker can be reached from Weavers-Fort Jefferson Road 0.1 miles west of Ohio Route 121, on the left when traveling west. This historic marker is located in the state park maintained by the Ohio Historical Society. It is attached to the stacked stone memorial that is featured in this park. Touch for map. Marker is in this post office area: Greenville OH 45331, United States of America. Touch for directions. 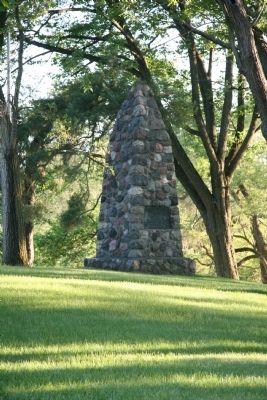 More about this marker. To get to this historic marker take State Route 121 to Fort Jefferson, Ohio, and turn west onto Weavers-Fort Jefferson Road and travel one block (less than 0.1 mile). The state park that is situated on the site of Fort Jefferson will be on your left and the historic marker is featured at the top of the hill in the center of the park.

Also see . . .
1. Fort Jefferson. This link is published and made available by, "Ohio History Central," an online encyclopedia of Ohio History. (Submitted on June 12, 2009, by Dale K. Benington of Toledo, Ohio.)

2. Fort Jefferson. This web link was both published and made available by the, "Ohio Historic Society." (Submitted on June 12, 2009, by Dale K. Benington of Toledo, Ohio.) 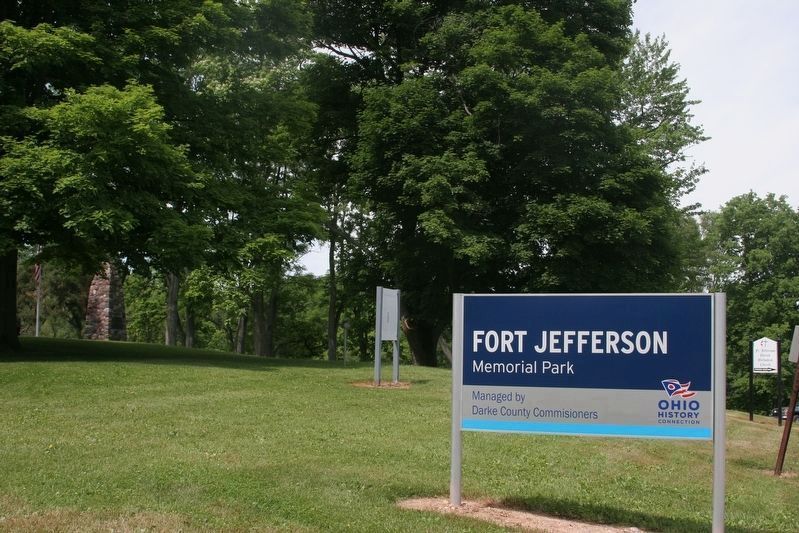 By J. Wesley Baker, June 3, 2016
3. Fort Jefferson Memorial Park
The Ohio History Connection sign for the site. The St. Clair's Defeat sign can be seen in the near background to the left of the sign and the stone monument is visible at the top of the knoll at the far left of the picture.
More. Search the internet for Fort Jefferson.