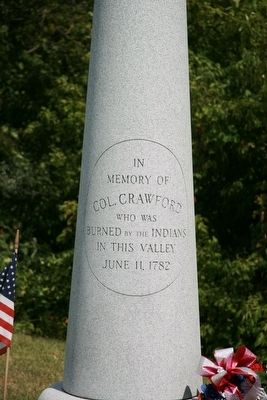 In
Memory of
Col. Crawford
Who was
Burned by the Indians
In this Valley
June 11, 1782

Topics. This historical marker is listed in these topic lists: Cemeteries & Burial Sites • Native Americans • War, US Revolutionary • Waterways & Vessels. A significant historical month for this entry is June 1899.

Location. 40° 55.402′ N, 83° 19.73′ W. Marker is near Crawford, Ohio, in Wyandot County. Marker is on Township Highway 300, 0.2 miles north of County Route 29, on the right when traveling north. This historical marker is located in the Ritchie Cemetery. To get there travel to the small rural town of Crawford, Ohio where the main community feature is the intersection of State Route 199 and County Road 29. Travel 0.9 miles east from State Route 199 on County Road 29 and then turn left on the entrance road to the Ritchie Cemetery, and travel north for 0.2 miles. Touch for map. Marker is in this post office area: Carey OH 43316, United States of America. Touch for directions.

Other nearby markers. At least 8 other markers are within 4 miles of this marker, measured as the crow flies. Colonel William Crawford / The 1782 Sandusky Campaign 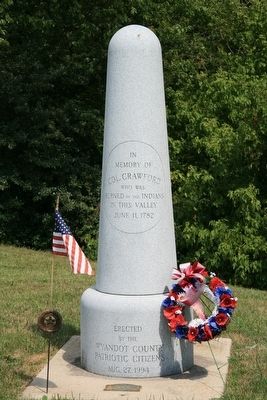 Also see . . .
1. William Crawford. This link is published and made available by, "Ohio History Central," an online encyclopedia of Ohio History. (Submitted on June 30, 2009, by Dale K. Benington of Toledo, Ohio.)

2. Battle of the Sandusky. This link is published and made available by, "Ohio History Central," an online encyclopedia of Ohio History. (Submitted on June 30, 2009, by Dale K. Benington of Toledo, Ohio.)

3. William Crawford (soldier). This web link was both published and made available by, "Absolute Astronomy.com," in it's 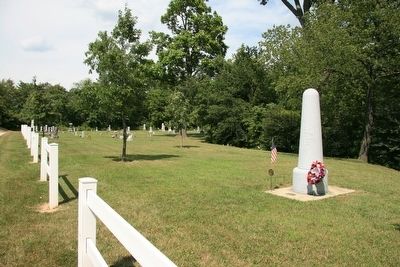 Photographed By Dale K. Benington, August 6, 2008
3. Colonel Crawford Marker
View of the historical marker with the Ritchie Cemetery in the background.
quest to enable "exploring the universe of knowledge." (Submitted on June 30, 2009, by Dale K. Benington of Toledo, Ohio.)

4. William Crawford. This is a link to information provided by the ExecutedToday.com website. (Submitted on April 20, 2016, by Dale K. Benington of Toledo, Ohio.)

Additional commentary.
1. The original Crawford Memorial
In several of the links that I looked over in preparing to publish information on the Col. Crawford Memorial marker, the prevailing insight regarding the background on this marker was that it was erected in 1994 by the "Wyandot County Patriotic Citizens." There is no mention of the fact that this is a duplicate marker that was made to replace the original memorial marker when it became inaccessible to the public (I believe due to private development).

The duplicate Crawford Memorial marker was made to look exactly like the original one, but although it is located in the same vicinity as the original, it is still far enough away that the original cannot be seen, nor can the area of Crawford's execution be viewed (as it could from the site of the original memorial marker).

I know this to be true because some twenty years ago I visited the site of the original marker. I knew to look 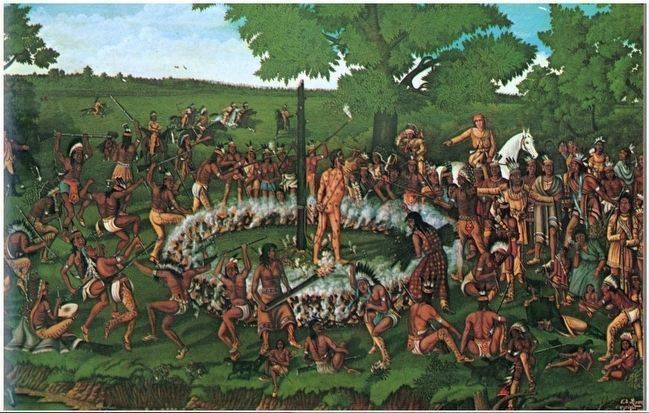