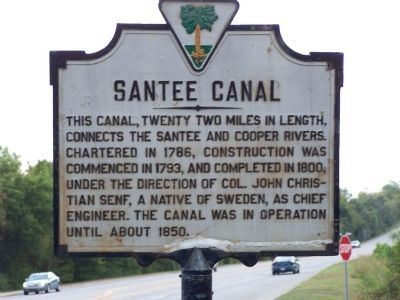 Photographed By Mike Stroud, 2009
1. Santee Canal Marker
The Old Santee Canal in South Carolina is clearly the nation's first summit canal. (A summit canal goes up and then back down to another body of water.) Construction was started in 1793 and finished in 1800, but little remains of it today.
Inscription.
Santee Canal. . , This canal, twenty-two miles in length, connects the Santee and Cooper Rivers. Chartered in 1786, construction was commenced in 1793, and completed in 1800, under the direction of Col. John Christian Senf, a native of Sweden, as Chief Engineer. The canal was in operation until about 1850. . This historical marker is in Moncks Corner in Berkeley County South Carolina

This canal, twenty-two miles in length, connects the Santee and Cooper Rivers. Chartered in 1786, construction was commenced in 1793, and completed in 1800, under the direction of Col. John Christian Senf, a native of Sweden, as Chief Engineer. The canal was in operation until about 1850. (Marker Number 8-3.)

Topics. This historical marker is listed in these topic lists: Man-Made Features • Waterways & Vessels. A significant historical year for this entry is 1786. 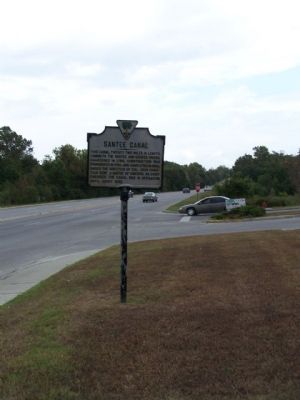 Regarding Santee Canal. The Santee Canal was constructed between 1793 and 1800 under the direction of Col. John Christian Senf, South Carolina State Engineer. Conceived to provide a shorter, safer water route from inland South Carolina to Charleston, the canal was one of the earliest important canals in the United States and perhaps the earliest major internal improvement project in the state. Originally intended as a delivery route for foodstuffs, the advent of successful cotton production made the canal more useful for transporting cotton bales. In 1830, during its most prosperous period, 720 boats arrived in Charleston bearing about 70,000 bales of cotton via the canal. The canal route was twenty-two miles long, beginning two miles below Greenwood Swamp on the Santee River and entering the Cooper River at Stoney Landing, approximately two miles east of Moncks Corner. The canal was thirty-five feet wide at the top and five and one half feet deep, sloping to a bottom width 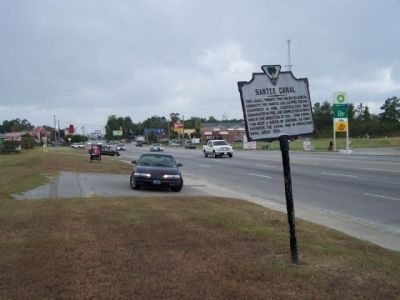 Photographed By Mike Stroud, September 20, 2009
3. Santee Canal Marker as seen looking south
of twenty feet. With the exception of a wooden tidal lock, all the locks were made of brick and stone. In addition to the canal itself, there were several warehouses, keepers’ houses, and other ancillary buildings along the route. All associated outbuildings, turning basins, lock bridges and the wooden lock have been destroyed. The towpaths are visible for large parts of the canal. The remains of the canal are overgrown with vegetation and are rapidly deteriorating. Listed in the National Register May 5, 1982. (S.C. Dept. of Archives and History) 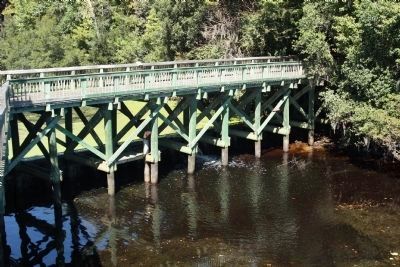