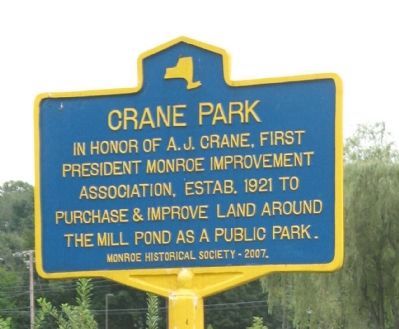 Photographed By Kathryn Squitieri, September 7, 2009
1. Crane Park Marker
Inscription.
Crane Park. . In honor of A. J. Crane, first president Monroe Improvement Association, estab. 1921 to purchase and improve land around the Mill Pond as a public park. . This historical marker was erected in 2007 by Monroe Historical Society. It is in Monroe in Orange County New York

In honor of A. J. Crane, first president Monroe Improvement Association, estab. 1921 to purchase and improve land around the Mill Pond as a public park.

Location. 41° 19.928′ N, 74° 11.42′ W. Marker is in Monroe, New York, in Orange County. Marker is at the intersection of Millpond Parkway and New York State Route 17M on Millpond Parkway. The sign is between the commuter parking lot and Airplane Park on the left side. Touch for map. Marker is in this post office area: Monroe NY 10950, United States of America. Touch for directions. 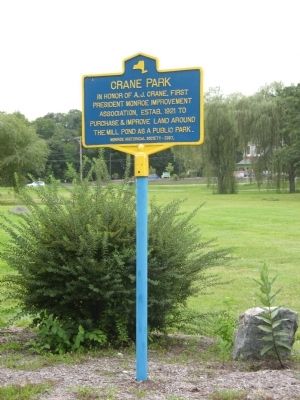 Click or scan to see
this page online
(approx. 0.3 miles away); Monroe Cheese Co. (approx. 0.4 miles away); Methodist Church (approx. half a mile away). Touch for a list and map of all markers in Monroe.

More about this marker. The historical marker was officially dedicated on October 15th 2008. 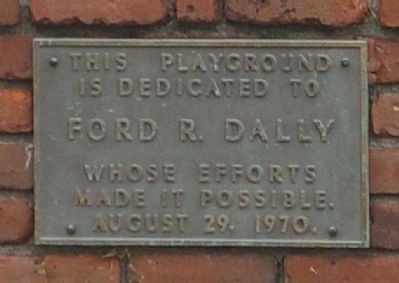 Photographed By Leslie Smith, October 16, 2009
3. Official Ford R. Dally Park tablet
The park was originally named after the park's superintendant who spearheaded the project in 1963. Locals still call this patch of greenspace Airplane Park, because a former National Guard F-86 has been a fixture here for over 40 years. 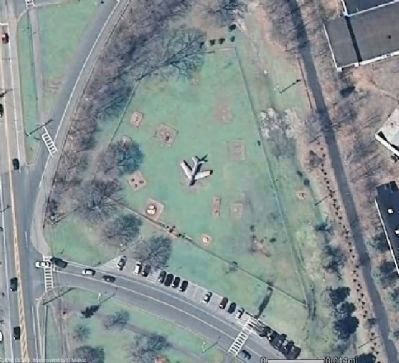