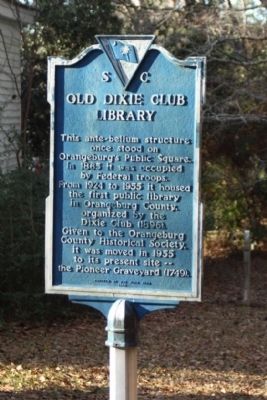 This antebellum structure once stood on Orangeburg's Public Square. In 1865 it was occupied by Federal troops. From 1924 to 1955 it housed the first public library in Orangeburg County, organized by the Dixie Club, (1896). Given to the Orangeburg County Historical Society, it was moved in 1955 to its present site-the Pioneer Graveyard-(1749).

Topics. This historical marker is listed in these topic lists: Arts, Letters, Music • Cemeteries & Burial Sites • Education • War, US Civil. A significant historical year for this entry is 1865. 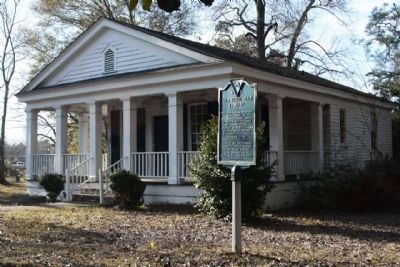 Regarding Old Dixie Club Library. The Dixie Library Building is significant as one of the few antebellum buildings remaining in the city of Orangeburg. It is a one-story, frame Classical Revival building believed to have been built ca. 1850. The building is primarily defined by its simplified Roman Revival temple form, expressed by its longitudinal orientation, its pedimented and low-pitched roof and its pseudo-peripteral colonnade of Tuscan piers. The building has a rudimentary entablature which is raked into the pediment. The tympanum has weatherboard sheathing and a louvered attic vent. The windows have recessed bulkhead panels and louvered shutters. The curious proportions and simplified moldings probably reflect limited command of classical motifs on the part of the builder, 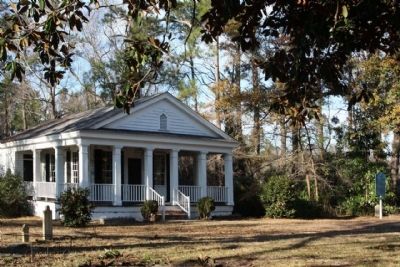 Photographed By Mike Stroud, January 3, 2010
3. Old Dixie Club Library
rather than any sense of creative innovation on the part of the designer. The building has been moved twice, in 1912 and 1955, but retains its architectural integrity and historic form. A small frame addition has been built on the rear of the building. Listed in the National Register September 20, 1985.
(South Carolina Department of Archives and History) 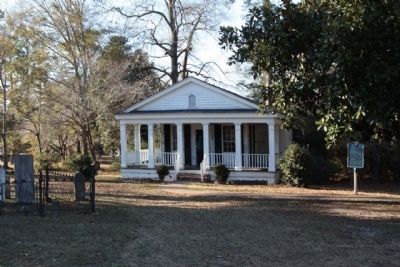 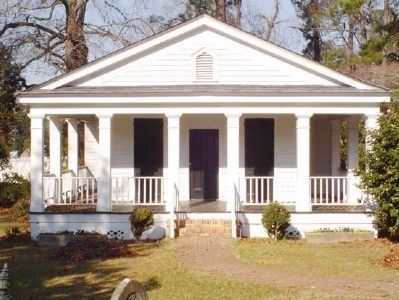