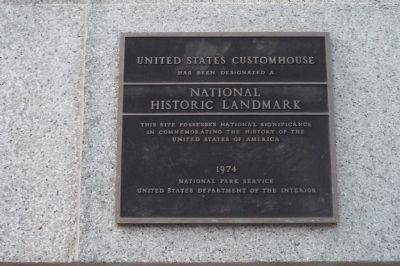 United States Customhouse
Has been designated a
National
Historic Landmark

Topics and series. This historical marker is listed in these topic lists: Animals • Architecture • Communications • Education • Science & Medicine • War, US Civil. In addition, it is included in the National Historic Landmarks series list. 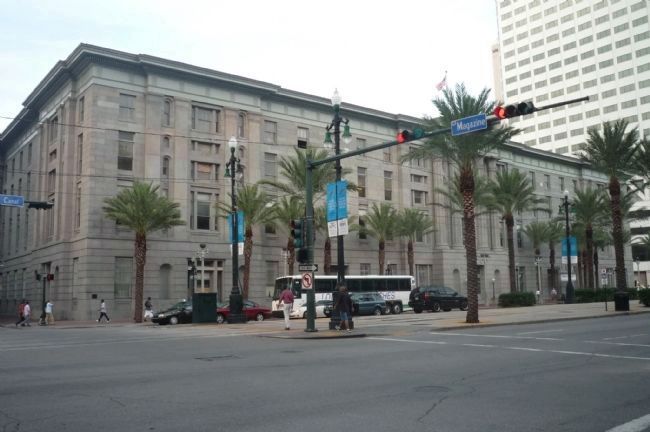 Also see . . .
1. U.S. Customs House, New Orleans. (Submitted on February 16, 2010, by Richard E. Miller of Oxon Hill, Maryland.)
2. "Old Pete" at Liberty Place [September 14, 1874]. ...Old Pete's militia and metropolitan police under A.S. Badger, were outnumbered more than two to one. At the ripe age of fifty-three, [Gen. James] Longstreet found himself in the midst of the worst street fight in U.S. history. The two sides, Republicans vs. Democrats, exchanged volleys and a fifteen-minute battle ensured. When the smoke cleared, more than 100 people lay dead or wounded. Longstreet's forces were not up to the task and, despite superior weaponry, they broke ranks and were routed. Most fled into the streets of the Latin Quarter. Longstreet suffered the humiliation of being wounded by a spent bullet and was captured by the mob. [Gov. William 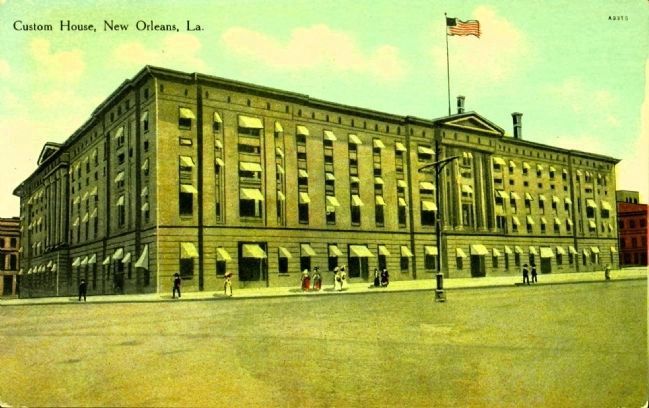 Postcard by the Lipsher Specialty Co., circa 1910
3. Custom House, New Orleans, La.
The back of the card reads:The Custom House is a large granite building, occupying an entire Square of ground on Canal St. between N. Peters and Decatur streets. The Cornerstone was laid in 1847 by Henry Clay. The Architecture is modified egyptian, and the cost of building was over Four Million Dollars.
P.] Kellogg remained in hiding on U.S. property at the Customs House. Within days, Federal gunboats and fresh troops arrived and restored order to "The Big Easy." But, as history demonstrated, the aftermath was anything but easy. (Submitted on February 24, 2010, by Richard E. Miller of Oxon Hill, Maryland.) 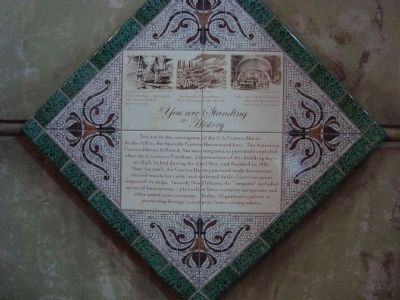 By Barry Swackhamer, December 27, 2011
4. You are Standing in History Marker
You are in the carriageway of the U.S. Custom House. In the 1780s, the Spanish Custom House stood here. Two American Custom Houses followed, but were outgrown as port of trade exploded after the Louisiana Purchase. Construction of this building began in 1843, halted during the Civil War, and finished in 1881. Then (as now) the Customs House processed trade documents, cleared vessels for entry, and collected duties (taxes) on goods imported via ships. In early New Orleans, the “imports” included scores of immigrants – plus yellow fever-carrying mosquitoes and other unwelcome stowaways. Today, all ports are vigilant in preventing foreign insect pest from coming ashore.
[Illustration captions: left] A stone cutter shapes a massive granite chunk into a finished block for an exterior wall; [center] View from the Custom House root shows the busy port before the war; [right] Under Union occupation, Confederate soldiers were imprisoned in the New Orleans Custom House.
Editor's Note: This marker is inside the Custom House. 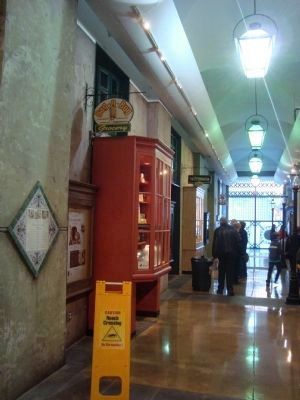