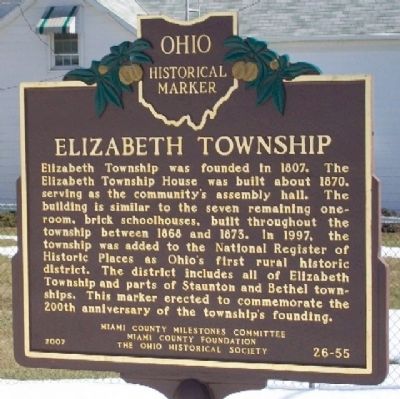 Elizabeth Township was founded in 1807. The Elizabeth Township House was built about 1870, serving as the community's assembly hall. The building is similar to the seven remaining one-room, brick schoolhouses, built throughout the township between 1868 and 1873. In 1997, the township was added to the National Register of Historic Places as Ohio's first rural historic district. The district includes all of Elizabeth Township and parts of Staunton and Bethel townships. This marker erected to commemorate the 200th anniversary of the township's founding.

Topics and series. This historical marker is listed in these topic lists: Agriculture • Education • Government & Politics • Natural Features • Notable Buildings • Notable Places • Political Subdivisions • Settlements & Settlers. In addition, it is included in the Ohio Historical Society / The Ohio History Connection series list. A significant historical year for this entry is 1807. 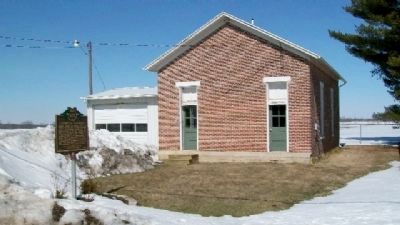 Click or scan to see
this page online
39° 59.973′ N, 84° 6.088′ W. Marker is near Troy, Ohio, in Miami County. Marker is on Walnut Grove-Clark County Road, on the left when traveling east. Marker is about six miles ESE of Troy, at the Elizabeth Township House, across the road from the Elizabeth Township Community Center (former Central School, c.1915). Touch for map. Marker is at or near this postal address: 5760 Walnut Grove-Clark County Road, Troy OH 45373, United States of America. Touch for directions. 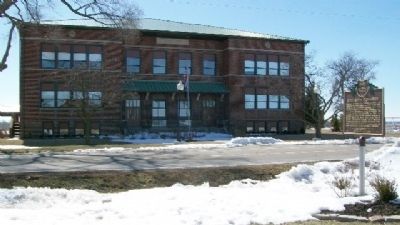