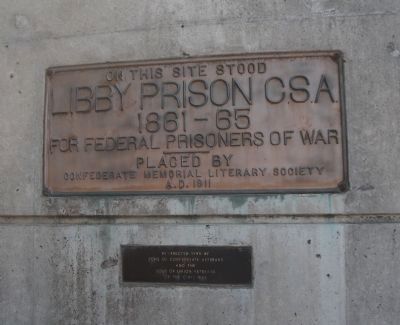 On this site stood
Libby Prison C.S.A.
1861-65
for Federal Prisoners of War

Topics. This historical marker is listed in these topic lists: Forts and Castles • War, US Civil. A significant historical year for this entry is 1911. 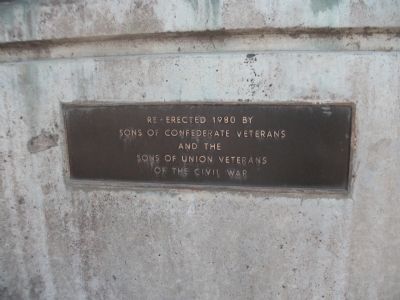 Photographed By Paul Jordan, April 29, 2010
2. The Libby Prison Marker was Re-erected in 1980
The Text of the Marker Reads: Re-erected 1980 by Sons of Confederate Veterans and the Sons of Union Veterans of the Civil War

Regarding Libby Prison CSA. Libby Prison was a Confederate Prison for captured Union officers. The prison opened in 1861, in a three-story brick tobacco warehouse, alongside the James River in Richmond, Virginia.

Conditions were deplorable. Overcrowding and lack of sanitation caused the death of many prisoners between 1863 and 1864. Libby prison is considered the second worst prison operated during the Civil War, second only to Andersonville Prison in Georgia.

Prison Escape. There was one noteworthy escape from Libby Prison. February 9, 1864, 109 men escaped by way of a tunnel. 59 succeeded in reaching the Union lines and freedom. 48 were recaptured. Two drowned in the James River. The escape was one of the most famous prison breaks during the Civil War.

In 1880, the building was purchased by Southern 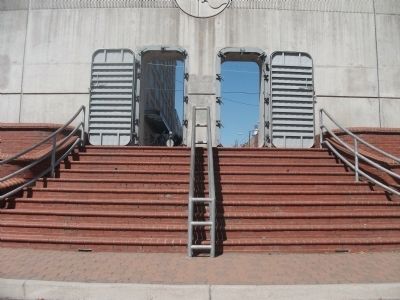 Photographed By Paul Jordan, April 29, 2010
3. The James River Flood Wall
View from the River Side. After you walk through these large doors, the marker is to the right.
Fertilizer Company. In 1889, the building was sold again, this time to a candymaker named Charles F. Gunther, who moved it - piece by piece to Chicago, Illinois. The prison was rebuilt and opened as a war museum, but the business venture proved unprofitable and the building was again dismantled and the pieces were sold as souvenirs. 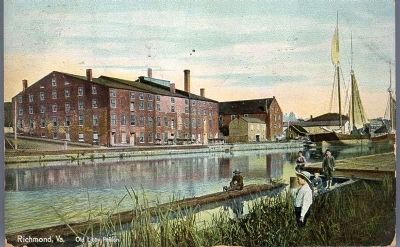