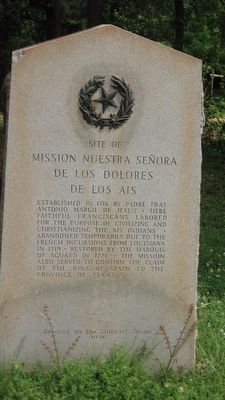 Established in 1716 by Padre Fray Antonio Margil de Jesús. Here faithful Franciscans labored for the purpose of civilizing and Christianizing the Ais Indians. Abandoned temporarily due to the French incursions from Louisiana in 1719. Restored by the Marquis of Aguayo in 1721. The mission also served to confirm the claim of the King of Spain to the Province of Texas.

Topics and series. This historical marker is listed in these topic lists: Churches & Religion • Colonial Era • Native Americans • Notable Buildings. In addition, it is included in the Texas 1936 Centennial Markers and Monuments series list.