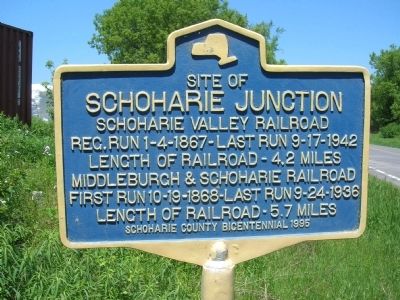 Topics. This historical marker is listed in these topic lists: Agriculture • Notable Places • Railroads & Streetcars. A significant historical date for this entry is January 4, 1867.

Other nearby markers. At least 8 other markers are within 2 miles of this marker, measured as the crow 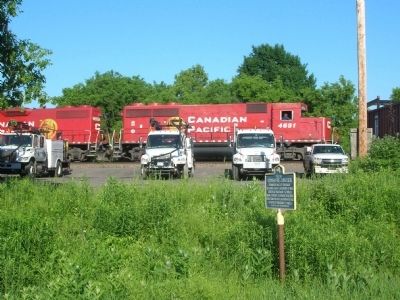 Regarding Schoharie Junction. Some background on the two separate railroads: The Schoharie Valley Railroad and The Middleburgh and Schoharie Railroad:

Schoharie is a Mohawk word meaning "Drift-wood." The settlement of Schoharie by white-Europeans began about 1712 by Palatine Germans. The farmlands of the Schoharie Valley were very fertile and rich, so much so that valley agriculture prospered to the point where it was know as "the Bread Basket of the American Revolution". In the fall of 1780 British forces with Tories and Indians raided the Schoharie and Mohawk Valleys from Canada. The raiders fought skirmishes and battles, took hundreds of prisoners, burned forts, farms, and mills and destroyed one of the finest grain harvests in living memory.

After the Revolution farming continued, though transportation was always a difficulty. A farmer's 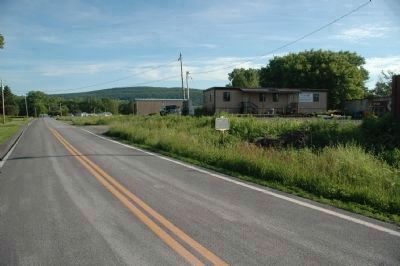 Photographed By Howard C. Ohlhous, June 15, 2010
3. Schoharie Junction Marker
The CPRail Maintenance of Way facility is to the right, just beyond the marker.
40 mile trip to Albany by horse and wagon was a three day affair at that time. The Erie Canal and its prosperity by-passed the Schoharie Valley by about 25 miles when it opened in 1825. A number of early railroads were charted, including the Catskill & Canajoharie, the Schoharie & Otsego, the Unadilla & Schoharie; however they never came to fruition nor reached the Schoharie Valley. Residents of the valley were probably a bit anxious by 1851 when the Albany & Susquehanna was chartered to build a line south from Albany, NY to Binghamton,NY. Towns of Schoharie County, including the Town of Schoharie, bonded themselves to aid the Albany and Susquehanna with $225,000 by 1864. With the arrival of the A&S railroad in Central Bridge, NY in 1863 the opportunity for a branch line to the village of Schoharie had presented itself.

In March of 1866 the Schoharie Valley Railroad received a charter to facilitate the construction of a 4.38 mile long railroad between the village of Schoharie and the Albany & Susquehanna railroad. In May of 1867 the Middleburgh and Schoharie Railroad received a charter to build a 5.75 mile long rail line between the village of Middleburgh and the Schoharie Valley Railroad. The two towns again bonded themselves and bought stock to support the two ventures. By early January of 1867 the SVRR was making scheduled trips, and by the end of October 1868 the 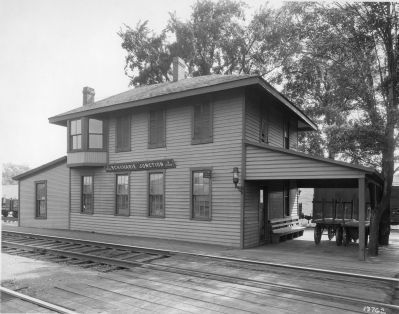 Bridge Line Historical Society, June 2008
4. Schoharie Junction Station - Early 1930s
This is an early 1930's era valuation photo of the Schoharie Junction depot. The view is from across the main D&H tracks, with the Schoharie Valley tracks on the far side of the building. The sign on the station identifies the location as "Schoharie Junction Station". The small lettering on the left tells us the mileage to Albany, NY is 35.34 miles, and on the right, 107.25 miles to Binghamton, NY. On the building we can see a Western Union Telegraph and Cable Office sign and an oil lamp with a fanciful bracket on the corner of the building near the platform and canopy area. A photo similar to this one was published in the Delaware & Hudson Company Board of Managers Inspection of Lines :: June 7th to June 10th, 1928, however a note beside the photo stated that, 'The A.T.O. Committee on Roadway and Structures Report reads -- "Understand that this building is property of Schoharie Valley R.R." The station no longer exists. - Photo courtesy of Bridge Line Historical Society
first M&S RR timetable had been published. The early years of these railroads were a little rough, but once the wrinkles got ironed out there were prosperous years which lasted mainly between 1870 and 1909. Records of ticket sales show that in 1868 it cost $1.65 to go to Albany from Schoharie. Both railroads were very small branch lines, so for many years they shared the engine house at the end-of-the-line turntable in Middleburgh. For six months of the year the Schoharie Valley engine was used, and then the next six months the Middleburgh & Schoharie engine was used. One crew worked for both railroads. Both the SV and the M&S were originally built to a 6-foot gauge to interchange with the Albany & Susquehanna. This was changed to standard gauge, 4'- 8.5", in May of 1874.

The hump back bridge was a local landmark on NY Route 7 located one mile north of Central Bridge where the road passed over the railroad tracks of the SVRR. In 1867 when the contractor building the SVRR through that spot refused to lower the roadbed the state was forced to build the bridge high over the railroad. In subsequent years the bridge was built even higher to accomomdate the height of taller railroad cars. The narrow wooden bridge was built with steep approaches on either side and a flat section on top above the railroad tracks. The bridge was not a problem for horses and wagons, but a scene 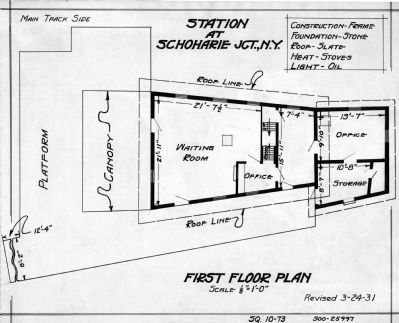 Bridge Line Historical Society, June 2008
5. Schoharie Junction Station Plan-View Drawing
A 1931 plan-view drawing of the first floor of the Schoharie Junction Station shows that the station had an unusual shape with very few right angles. This was due to its location on a triangular plot at the junction of two converging rail lines. One thing that makes this station unique is the placement of station agent's bay window on the second floor rather than the first floor. A later revision of this drawing dated 9-15-33 indicates that the single story addition on the left labeled "Office" and "Storage" in this drawing had been removed. Drawing courtesy of the Bridge Line Historical Society.
of accidents and even fatalities for motorists. Due to growth of automobile traffic it was finally torn down because it was an increasing menace to public safety and replaced with a safer design of concrete in December of 1930.

The SVRR had to cross the Fox creek before coming to the Village of Schoharie. There was a wooden Howe Truss covered bridge built in 1866 which lasted until 1910 when it was washed out and destroyed. The new steel bridge not only served the railroad, but a whole generation of youth who used it as a diving platform at the old swimin' hole in the creek below. 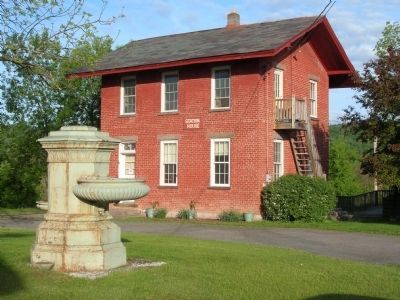 Photographed By Howard C. Ohlhous, May 24, 2008
6. Schoharie Valley Station 2008
This is the Schoharie Valley Depot which is now part of the Schoharie Valley Railroads Museum. This two-story brick station was built in 1875 to replace the original wooden station that burned that year. Currently a residence is maintained on the 2nd floor. The light green object in the foreground is a cast iron "Man-Horse-Dog Fountain" which featured three drinking levels. Manufactured by the J. L. Mott Iron Works in an area called Motthaven in the Bronx, New York City, it once stood at the corner of Prospect and Main Street in the Village of Schoharie.
Creamery. Casine used in piano keys, buttons, and toilet articles.

Prosperity started to decline for both the railroads about the time of the First World War when the federal government took over all the railroads in the country and forced them to operate under regulations and mismanagement from which they never seemed to recover. About that same time the Middleburgh Plum was stricken by the a disease call Black Knot. New York had been the third largest grower of hops to be used in beer brewing. After the hop plants were hit by the blue mold in the Schoharie valley that large industry began to fade away and dairy farming gradually took its place. Also at that time feed dealers and creameries began shipping by truck. In 1906 the D&H bought all of the stock of the Schoharie Valley Railroad, but the Middleburgh and Schoharie remained in local hands. By 1935 the Middleburgh & Schoharie had not been paying its taxes, and the absolute minimum maintenance had been performed on the railroad bed, tracks, and equipment. The tracks were in terrible shape and the Schoharie Valley Railroad wouldn't even risk running its engine on the M&S line. On September 24th, 1936 the Public Service Commission had ordered the M&SRR to stop operation until repairs were made. It had been estimated that it would cost $7,000 to $8,000 to return the track, crossings, and locomotive to good repair. The 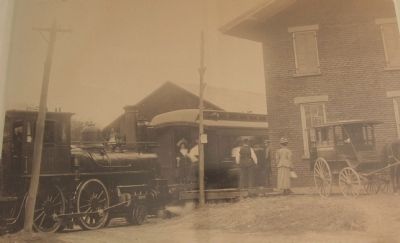 Photographed By Howard C. Ohlhous, June 21, 2
7. Schohare Valley Station circa 1900
SV Railroad President Jacob Vrooman probably over-built this station compared to the needs of the small railroad, after the previous station burned down along with the adjacent engine house in April of 1875. Here we see the station, and a SVRR Engine with a passenger car. A carriage is at the ready waiting to shuttle passengers to one of the nearby hotels, the Parrot House, whose name appears on the side of the carriage. This photo is displayed on the wall inside the station house, which is now a museum.
railroad would never be open again for business. In March of 1937 the railroad was auctioned off for $11,000 as scrap metal, with the 5.7 miles of rails bringing $18.65 a ton. A junk dealer, E.O. Friedman, of Albany outbid 13 others. The Right of Way of the M&SRR was purchased by the New York Power and Light Corp which had leased the right of way from the railroad to run its power lines 35 years earlier.

By 1942 the little Schoharie Valley Railroad no longer had enough traffic to justify continued operation. Application was filed with the ICC (Interstate Commerce Commission) to abandon the 76-year-old, 4.3 mile rural line and on September 16, 1942 its infrequent operation ceased.

The Railroads were instrumental in opening previously land-locked Schoharie Valley. They provided, from Civil War days until 1942, a fast and efficient method of transporting crops and tourist to and from this scenic historic region and this stimulated economic and social development.
Reference:
Pride of the Valley - Railroading in Schoharie County 1828 - 1942, E. A. Hagan, 1973.
Ms. Jean Hara - Director, Schoharie Valley Railroads Museum. 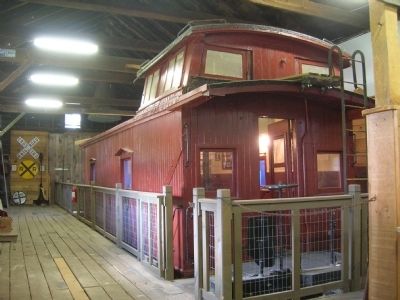 Photographed By Howard C. Ohlhous, June 21, 2008
9. Schoharie Valley Engine House
This is D&H Caboose # 35842 which was restored and placed on display in the Schoharie Valley Railroads Museum's combination Engine House and Freight House. George Elston was instrumental in getting this project accomplished with the Bridge Line Historical Society. In the far end of the building beyond the caboose a cone-shaped sheet metal funnel still hangs from the ceiling. This was used to channel the smoke from the steam engine smokestack out of the building while parked in the engine stall. The caboose is open for viewing and used to display related memorabilia. 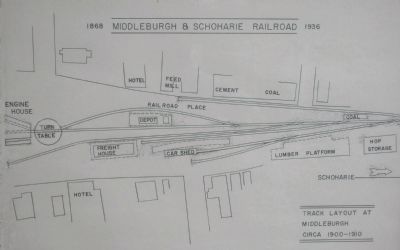 Photographed By Howard C. Ohlhous, June 18, 2008
10. Middleburgh & Schoharie Yard
The Middleburgh & Schoharie Yard circa 1900-10; everything a small town needed: The Farmers Hotel and Cottage Hotel, a Flour and feed mill, a cement and salt business and coal business, lumber and ice, a wagon shop, and the Borst building for Hop Storage. The railroad had a hand-operated turntable, an engine house, a car shed, an old coach shed, and both a Passenger and a Freight house. This map is on display in the Old Stone Fort Museum. 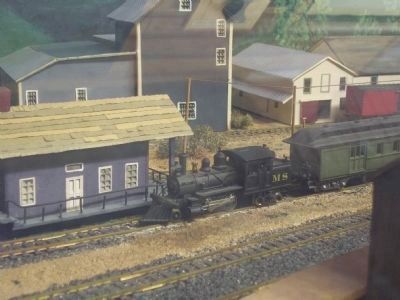 Photographed By Howard C. Ohlhous, June 18, 2008
11. The Middleburgh & Schoharie Yard in HO Scale
Here we see the likeness of M&S steam engine #2 at the Middleburgh station. Engine #2 was built by the Schenectady Locomotive Works as #4281 in 1895 with 13" cylinders, and 56" drivers. This model railroad is on display in The Old Stone Fort Museum in Schoharie, NY. 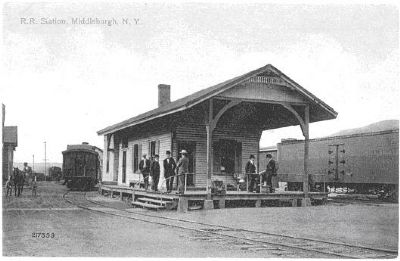 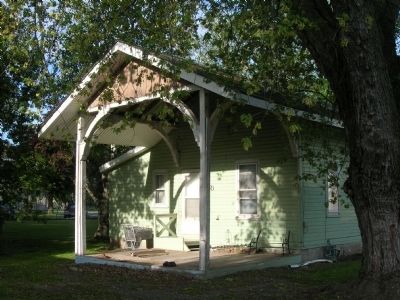 Photographed By Howard C. Ohlhous, May 24, 2008
13. Middleburgh & Schoharie Station 2008
The Middleburgh & Schoharie Station was moved a short distance from where it was built to the corner of Wells St. and Maple Ave., and has been used as a private residence for many years. In 2003, the Village of Middleburgh was awarded a grant for $370,438 to restore its historic train station and develop it as a museum of railroad history.