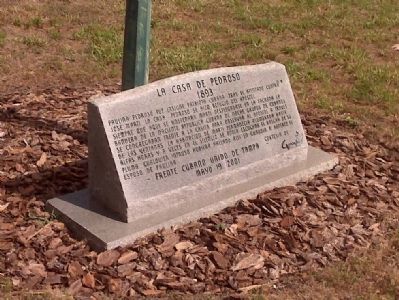 Photographed By AGS Media, June 4, 2010
1. La Casa de Pedroso Marker
Inscription.
[English translation:] , Paulina Pedroso was a distinguished Cuban patriot. After the attack on Jose Marti, the Pedroso House became his's refuge., Whenever Marti stayed here, the flag of the young Cuban Republic was displayed on the façade. At night, groups of Cubans gathered in front of the small house to observe Marti through the windows. Marti's room remained lit until the wee hours of the night and sometimes when it was very quiet you could here the scratching of his pen. Any intruder would have found Paulina's husband Ruperto on guard. . This historical marker was erected in 2001 by Frente Cubano Unido de Tampa (cortesia de Gonzalez Funeral Home). It is in Tampa in Hillsborough County Florida