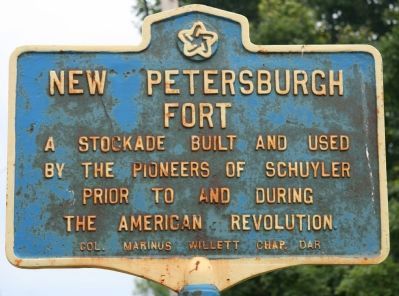 Photographed By Dale K. Benington, June 16, 2010
1. New Petersburgh Fort Marker
Inscription.
New Petersburgh Fort. .
A stockade built and used by the pioneers of Schuyler prior to and during the American Revolution. . This historical marker was erected by Col. Marinus Willett Chap. DAR. It is in East Schuyler in Herkimer County New York

Topics and series. This historical marker is listed in these topic lists: Colonial Era • Forts and Castles • Settlements & Settlers • War, US Revolutionary • Wars, US Indian. In addition, it is included in the Daughters of the American Revolution (DAR) series list.

Location. 43° 3.334′ N, 75° 4.639′ W. Marker is in East Schuyler, New York, in Herkimer County. Marker is on Hwy 5 (New York State Route 5) 0.2 miles west of Moss Road, on the right when traveling east. This historical marker is located on the north side of the Mohawk River, midway between Utica NY and Herkimer NY. Touch for map. Marker is at or near this postal address: 3554 Hwy 5, Frankfort NY 13340, United States of America. Touch for directions.

Other nearby markers. At least 8 other markers are within 3 miles of this marker, measured as the crow flies. Potash Factory (about 600 feet away, measured in a direct line); Balloon Farm (approx. 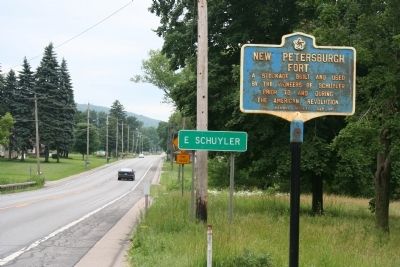