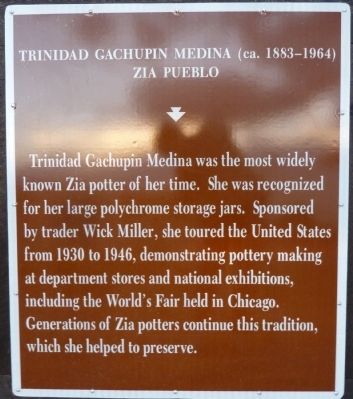 Trinidad Gachupin Medina was the most widely known Zia potter of her time. She was recognized for her large polychrome storage jars. Sponsored by trader Wick Miller, she toured the United States from 1930 to 1946, demonstrating pottery making at department stores and national exhibitions, including the World’s Fair held in Chicago. Generations of Zia potters continue this tradition, which she helped to preserve.

Topics. This historical marker is listed in these topic lists: Arts, Letters, Music • Industry & Commerce • Native Americans • Women. A significant historical year for this entry is 1930.

Other nearby markers. At least 8 other markers are within 16 miles of this marker, measured as the crow flies. Pueblo of Zía (a few steps from this marker); Vasquez de Coronado's Route (approx. 2½ miles away); 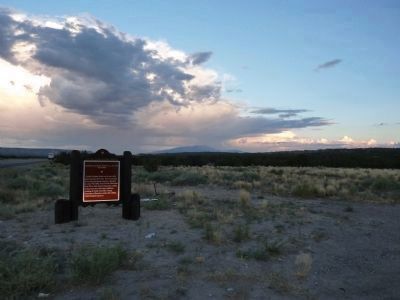 July 1, 2010
2. Trinidad Gachupin Medina (ca. 1883-1964) Marker
Looking east down U.S. 550 / N.M. 44 and the Jemez River drainage. Santa Ana Pueblo is approximately 8 miles northeast. Sandia Peak is on the horizon. The Jemez and Rio Grande Rivers meet at the north end of the Sandias, forming La Angostura (bottle neck), where the defensive settlement of Algodones was founded in the Spanish reconquesta of New Mexico after the 1680 Pueblo Revolt.

More about this marker. This marker is part of the New Mexico Historic Women Marker Initiative project. 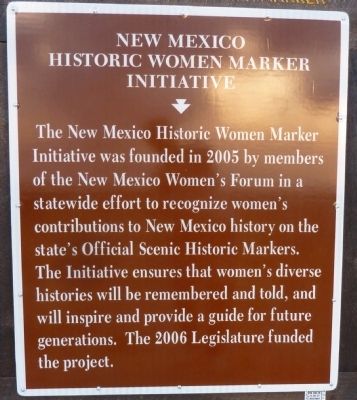 July 1, 2010
3. Trinidad Gachupin Medina (ca. 1883-1964) Marker - Reverse
New Mexico Historic Women Marker Initiative The New Mexico Historic Women Marker Initiative was founded in 2005 by members of the New Mexico Women's Forum in a statewide effort to recognize women's contributions to New Mexico history on the state's Official Scenic Historic Markers. The Initiative assures that women's diverse histories will be remembered and told and will inspire and proviee a guide for future generations. The 2006 legislature funded the project. 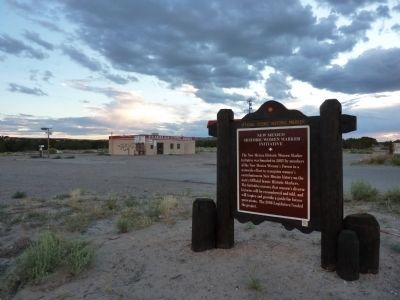 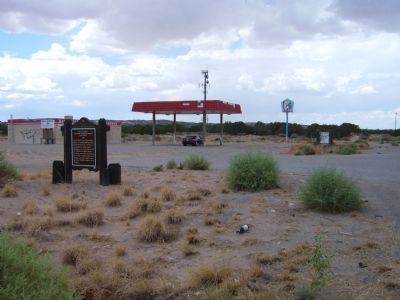