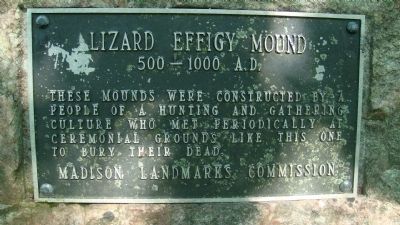 Photographed By William J. Toman, July 16, 2010
1. Lizard Effigy Mound Marker
Inscription.
Lizard Effigy Mound. 500-1000 A.D.. These mounds were constructed by a people of a hunting and gathering culture who met periodically at ceremonial grounds like this one to bury their dead. . This historical marker was erected in 1990 by Madison Landmarks Commission. It is in Madison in Dane County Wisconsin

These mounds were constructed by a people of a hunting and gathering culture who met periodically at ceremonial grounds like this one to bury their dead.

Topics and series. This historical marker is listed in these topic lists: Cemeteries & Burial Sites • Native Americans • Notable Places. In addition, it is included in the Wisconsin, Madison Landmarks Commission series list.

Location. 43° 5.402′ N, 89° 20.713′ W. Marker is in Madison, Wisconsin, in Dane County. Marker can be reached from the intersection of Lakeland Avenue and Hudson Avenue, on the right when traveling east. The marker is in Hudson Park. Touch for map. Marker is in this post office area: Madison WI 53704, United States of America. Touch for directions.

Other nearby markers. At least 8 other markers are within walking distance of this marker. Lt. Gerald Stull USAF (about 400 feet away, measured in a direct line); Herman J. Loftsgordon House (about 800 feet away); Corry Carriage House (approx. 0.2 miles away); "Elmside" (approx. 0.2 miles 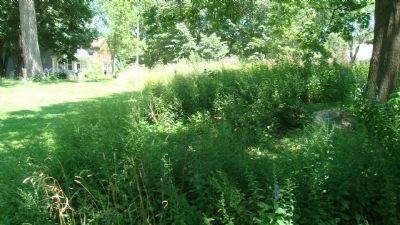 Photographed By William J. Toman, July 16, 2010
2. Lizard Effigy Mound Marker
The marker is nearly hidden in the prairie grasses under the tree.

Regarding Lizard Effigy Mound. According to the Madison Landmarks Commission, "Overlooking Lake Monona is a long tailed effigy mound [dating from 700-1200 A.D.] that has been referred to as a turtle, lizard, panther and water spirit. Part of the tail was cut off when Lakeland Avenue was constructed. This mound was originally part of a dense and extensive cluster of mounds that extended from the Yahara River to what is now Olbrich Park. The site was still a favored Ho-Chunk campground as late as the late 19th century.

"Wisconsin has the highest concentration of effigy mounds in the United States and the Madison area has one of the highest concentration of effigy mounds remaining. Most mounds were lost to 19th century agricultural practices and city development. The mound builders were farmers who also engaged in hunting and gathering. They lived in small villages and migrated from one to another based on the seasonal 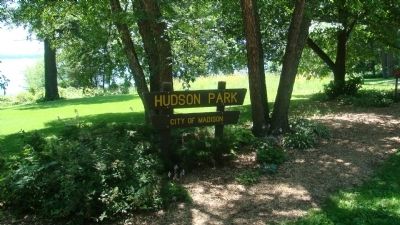 Photographed By William J. Toman, July 16, 2010
3. The Marker is in Hudson Park
availability of natural resources. The mounds often, but not always, have burials associated with them, but their exact purpose is not entirely understood. Mounds tend to have been built in places with beautiful views of the surrounding countryside. The mounds are considered sacred by modern Native Americans and should be treated with respect."

According to a 1996 survey by Robert A. Birmingham and Katherine H. Rankin entitled Native American Mounds in Madison and Dane County, "At the intersection of Lakeland and Hudson Avenues is a long-tailed animal effigy variously referred to as a turtle, a lizard and a panther. Part of the tail was cut off when Lakeland Avenue was constructed.

"This mound was originally part of a large group of mounds located a short distance west of the Elmside Mounds. This group included a goose mound with folded wings, at least one bird mound, animal effigies and other mounds. They were destroyed by residential development around the turn of the century." 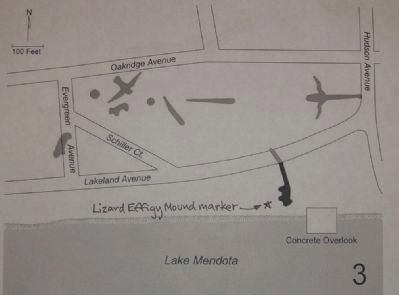