Site of Log Meeting House of the Baptist Church of Warwick 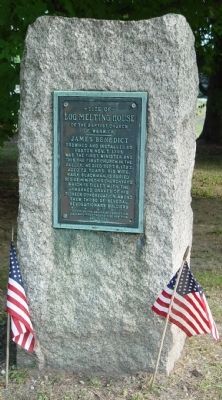 James Benedict ordained and installed as pastor Nov. 7, 1765 was the first minister and this the first church in the valley. He died Sept. 9, 1792 aged 72 years. His wife, Mary Blackman, is buried beside him in this churchyard, which is filled with the unmarked graves of his pioneer congregation, among them those of several Revolutionary soldiers.

Erected 1931 by Baptist Church of Warwick and the State of New York.

Topics. This historical marker is listed in these topic lists: Cemeteries & Burial Sites • Churches & Religion • Colonial Era • War, US Revolutionary. A significant historical month for this entry is September 1811.

Photographed By Clifton Patrick, August 6, 2010
2. Site of Log Meeting House of the Baptist Church of Warwick