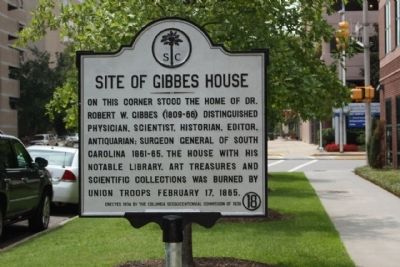 Photographed By Mike Stroud, 2010
1. Site of Gibbes House Marker
Inscription.
Site of Gibbes House. . On this corner stood the home of Dr. Robert W. Gibbes (1809-66) distinguished physician, scientist, historian, editor, antiquarian; Surgeon General of South Carolina 1861-65. The house with his notable library, art treasures and scientific collections was burned by Union troops February 17, 1865. . This historical marker was erected in 1938 by The Columbia Sesquicentennial Commission of 1936. It is in Columbia in Richland County South Carolina

Topics. This historical marker is listed in this topic list: Notable Buildings. A significant historical date for this entry is February 17, 1908.

Location. 34° 0.361′ N, 81° 1.986′ W. Marker is in Columbia, South Carolina, in Richland County. Marker is on Hampton Street, on the right when traveling west. Located between Marion and Sumter Streets. Touch for map. Marker is in this post office area: Columbia SC 29201, United States of America. Touch for directions. 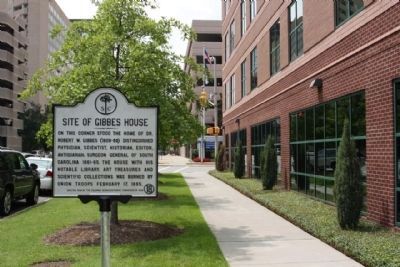 Also see . . .  Wade Hampton Gibbes Obituary. His father, Dr. Robert Wilson Gibbes, was a gentleman of comfortable estate and of high local reputation in science, literature, and his chosen profession of medicine, being Surgeon General of South Carolina under the Confederate Government. (Submitted on August 2, 2011, by Brian Scott of Anderson, South Carolina.)

Additional commentary.
1. Dr. Robert W. Gibbs - A Successful and Skillful Physician
Dr. Robert W. Gibbes, Sr., was a scientist in every sense of the word, a very skillful physician and surgeon, an able writer on varied subjects, and a genial, charitable gentleman; besides being a valued member of many foreign as well as American literary associations.

When Dr. H.H. Toland decided to take up his abode in California, Dr. G. succeeded to his professional business and removed to Dr. T.'s home, northeast 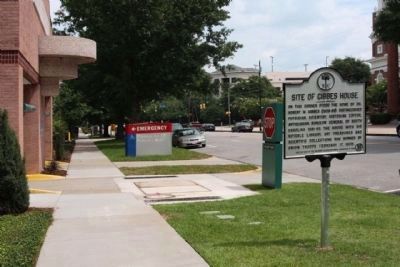 Photographed By Mike Stroud, August 29, 2010
3. Site of Gibbes House Marker, looking east along Hampton Street
corner Sumter and Plain streets. His old homestead was on the northwest corner of Marion and Lady streets. Our venerated friend took up Dr. Toland's practice among the Hampton negroes; and Gen. H., commenting on his practice, under the new regime, declared that Gibbes saved him fully $5,000 a year in slaves. "Toland lanceted them to death, while Gibbes lifened them with quinine." Among the other legacies obtained by Dr. G. in the Toland transfer was The Palmetto State Banner, which was being extravagantly run by Mr. I.C. Morgan. Instead of receiving interest on the mortgage, he was constantly being called upon to put out money for expenses, and was finally compelled to foreclose. By proper management and his extraordinary business tact, Dr. Gibbes made a success of the paper, both daily and weekly, and swallowed The South Carolinian, in 1852, when my business relations began with him. I can back up Gen. Hampton's statement as to the lancing—I have several reminders on my left arm. Dr. Gibbes, with his other duties, edited the paper, assisted by his eldest son, James G, Esq., succeeded by poor Frank Gaillard, a pleasing, forcible writer, who lost his life on the battle-fields of Virginia. It was during this time that trouble occurred between Capt. James D. Tradewell and Editor Frank Gaillard, and a challenge passed. Mr. G would write up his editorials several 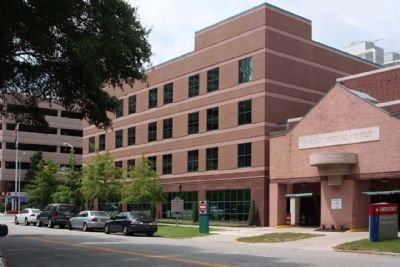 Photographed By Mike Stroud, August 29, 2010
4. Site of Gibbes House Marker, seen in front of Baptist Medical Center
days ahead (for he wielded his pen with the greatest facility) occasionally, and go off on a courting trip to Winnsboro—maybe it was to see his children by a deceased wife. I looked after the news matter and the general management of the office. During one of these trips, an imperative note was received at the office from Capt. T. I telegraphed Mr. G. and he promptly returned to Columbia. The officials got hold of the matter and attempted to arrest the parties. Capt. T. "hid out," and Mr. G, with his bosom friends, Dr. Junius Nott and Beverly Means, secured quarters in an out-of-the-way part of the Congaree House (site of the Jerome). Although not responsible in any way about the matter, I was terribly worried during the two or three intervening days. A Board of Honor took the affair in hand and it was amicably adjusted.

Dr. Gibbes was fond of puns and double entendres, but insisted that italics should never be used. "If a point is so weak that the reader cannot see, it must be poor," he would say. On one occasion, the famous singer, Parodi, gave a concert here, which very much pleased the editor-doctor, and in commenting on it, he said the boys on their way home Parodied the singing. Forgetting directions, I put it Parodied—making him repeat his wishes more explicitly. It never again occurred. His printing office, on Washington street, near Richardson, was 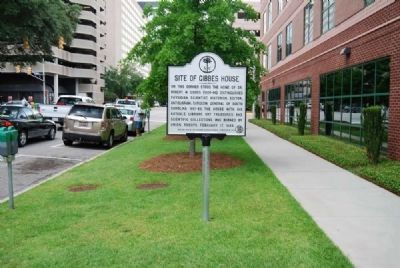 Photographed By Brian Scott, July 25, 2011
5. Site of Gibbes House Marker
totally destroyed by fire, soon after midnight. The next morning, his son, James, was off to Charleston, to have necessary legislative printing done, while the Doctor was looking after other important matters and arrangements for rebuilding. (Source: Memorabilia and anecdotal reminiscences of Columbia, S.C. by Julian A. Selby and William Gilmore Simms (1905), pg 19.)
— Submitted August 2, 2011, by Brian Scott of Anderson, South Carolina.
2. Stories About Dr. Robert W. Gibbs
As for Dr. Cooper...I don't think anyone can give even a list of writings since Dr. [Robert W.] Gibbes is dead. My father told me that Dr. Cooper, having a sick horse, went to Dr. Gibbs and asked him if he could refer him to any good work on the veterinary art, to which the doctor replied by taking down a volume from his shelves and saying, "Here is one I have found trustworthy." "Who is it by?" asked Dr. Cooper. "It is," says Dr. Gibbes, "by one Thomas Cooper." He had forgotten he had written the treatise. -- Carolina Voices: Two Hundred Years of Student Experiences by Carolyn B. Matalene and Katherine Chaddock Reynolds (2001), pg. 15)

Gibbes was well known for giving medicine that smelled like rotten eggs for whooping cough. Children with a sore throat would have it examined by having 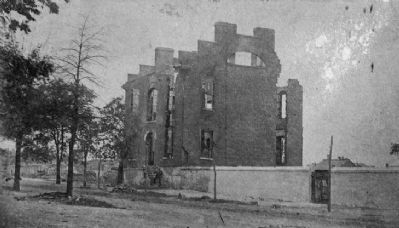 South Caroliniana Library, University of South Carolina, 1865
6. Residence of Dr. Robert W. Gibbes, Jr.
Photo taken after the devastation of Sherman's raid on Columbia. The balding man standing on the step is thought to be Gibbs.
the handle of a spoon put down their throats for the examination. The lancing of boils was a memorable experience, as was any serious illness or surgery. -- Columbia: A History of a Southern Capital by Lunn Salsi and Margaret Sims (2003) pg 41).