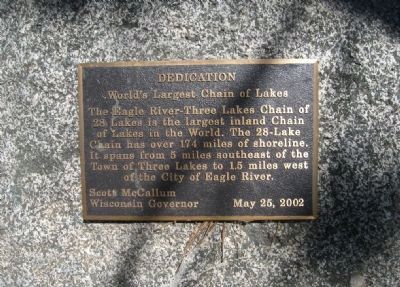 The Eagle River-Three Lakes Chain of 28 Lakes is the largest inland Chain of Lakes in the World. The 28-Lake Chain has over 174 miles of shoreline. It spans from 5 miles southeast of the Town of Three Lakes to 1.5 miles west of the City of Eagle River.
Scott McCallum
Wisconsin Governor · May 25, 2002

Topics. This historical marker is listed in this topic list: Waterways & Vessels. A significant historical month for this entry is May 1864.

Other nearby markers. At least 2 other markers are within 7 miles of this marker, measured as the crow flies. Home of Fred "Cy" Williams (here, next to this marker); Nicolet National Forest (approx. 6½ miles away). 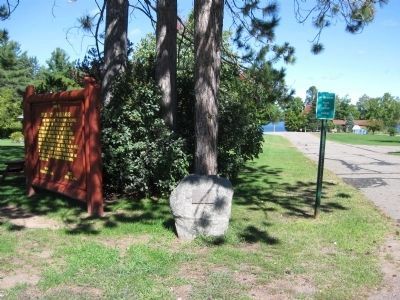 Click or scan to see
this page online
is a small community nestled amidst the 650,000-acre Chequamegon Nicolet National Forest, known for its crystal clear lakes..." (Submitted on September 23, 2010.)

2. Eagle River Chamber of Commerce. "Eagle River is geographically centered within the largest concentration of freshwater lakes in the world. There are nearly 3000 lakes within an hours car ride from town." (Submitted on September 23, 2010.) 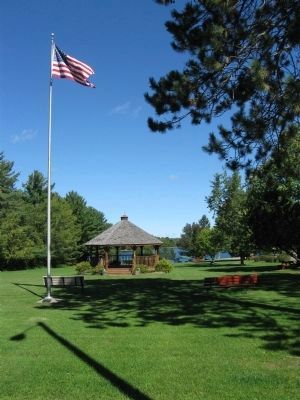 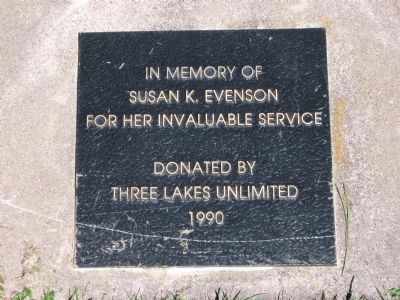