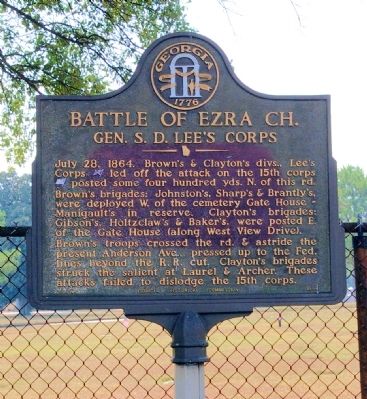 Photographed By David Seibert, September 22, 2010
1. Battle of Ezra Ch. Marker
Inscription.
Battle of Ezra Ch.. Gen. S. D. Lee’s Corps. July 26, 1864. Brown’s and Clayton’s divs., Lee’s Corps [CS] led off the attack on the 15th corps [US] posted some 400 yds. N. of this rd. , Brown’s brigades: Johnston’s, Sharp’s and Brantly’s, were deployed W. of the cemetery Gate House ~ Manigault’s in reserve. Clayton’s brigades: Gibson’s, Holtzclaw’s and Baker’s, were posted E. of the Gate House (along West View Drive). , Brown’s troops crossed the rd and astride the present Anderson Ave., pressed up to the Fed. lines beyond the R.R. cut. Clayton’s brigades struck the salient at Laurel and Archer. These attacks failed to dislodge the 15th corps. . This historical marker was erected in 1958 by Georgia Historical Commission. It is in Atlanta in Fulton County Georgia

Brown’s troops crossed the rd & astride the present Anderson Ave., pressed up to the Fed. lines beyond the R.R. cut. Clayton’s brigades struck the salient at Laurel & Archer. These attacks failed to dislodge the 15th corps.

Topics and series. This historical marker is listed in this topic list: War, US Civil. In addition, it is included in the Georgia Historical Society series list. A significant historical date for this entry is July 26, 1864.

Click or scan to see
this page online
of Anderson Avenue, on the right when traveling east. The marker stands at the fence enclosing West View Cemetery. Touch for map. Marker is in this post office area: Atlanta GA 30310, United States of America. Touch for directions.